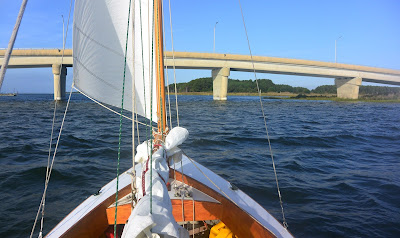 I wake to clear skies in the middle of the night, cool dry air from the cold front letting the stars shine bright.  I wake again before dawn, fully rested after the best sleep of the trip.  There is wind, but not as much as yesterday.  Weather radio has dropped the forecast waves on the bay from two to three feet down to one to two feet.  Life is good. 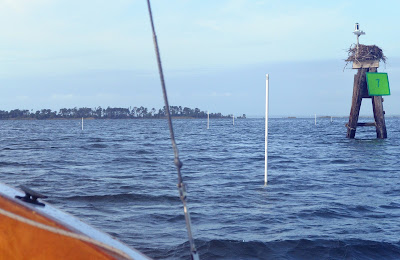 We sail off anchor with a double reefed main just after 7:00, rounding Lower Wroten Island and following the channel to Fishing Creek in a light chop.  Before 8:00 the bridge is in sight and thirty minutes later I drop the main to sail under the bridge.  The markings on the bridge show I should have seven feet of clearance under the bridge, but with the high tides it looks more like three or four feet.  Two eagles fly over the marsh to the north. 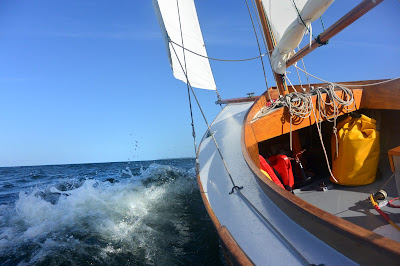 We follow the narrow winding channel out of the creek, white pvc pipes, marked with silver tape to starboard and red tape to port, showing the skinny path that is about a third of what the channel once was.  The double reefed main goes up at 9:00, making 4.4 knots along the marshes called the Big Broads.   The wind is just right for a steady path up the shoreline reaching slowly out to deeper water.  After an hour sailing north on the Bay I shake out a reef and watch three rays swim beneath Spartina's hull.  Small schools of coppery menhaden boil on the surface.  James Island on the horizon before 11:00 and we tack back into calmer water near shore.  The wind falls off, fills in and we sail with a full main. 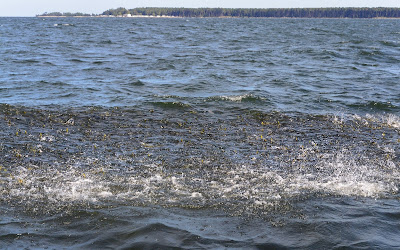 Working against the tide it is slow going past Oyster Cove and it's early afternoon before we are in the Little Choptank, sailing at three knots.  I put out the trolling line and in just a minute or two the drag sings and a nice bluefish is on the line.  I've got chores for the afternoon so instead of saving the fish for a meal it goes back in the water to be caught another day. 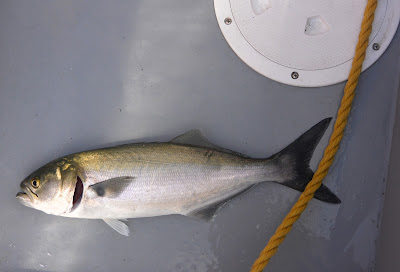 Inconsistent wind, under power across the river for a while and then we catch a breeze at the mouth of Brooks Creek.  Two eagles are perched on a dead tree at the point, both taking flight.  Soon a fledgling shows in the pines nearby. 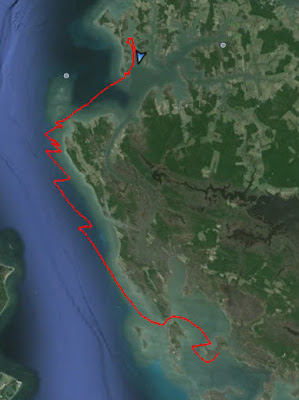 We head up the creek so I can tie up an a public boat ramp to empty out the holding tank.  Then back down the creek with a nice breeze, rounding up and dropping anchor inside Butter Pat Point at 4:30.  I write 30 nm in the notebook. 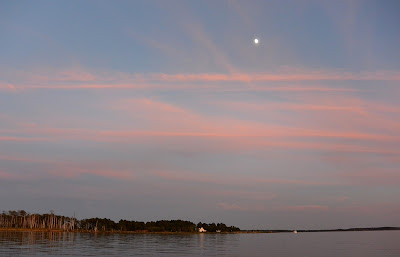 Nice accounts and photos as always. I've never heard the term "broads" used in this country for marshy areas. I associate it with England - Norfork Broads and Suffolk Broads. (http://www.enjoythebroads.com/) I wonder if it's used elsewhere in this country.

This is the only area I've heard the term used, but my knowledge base is pretty limited. Yes, I connect it with the use in England. steve