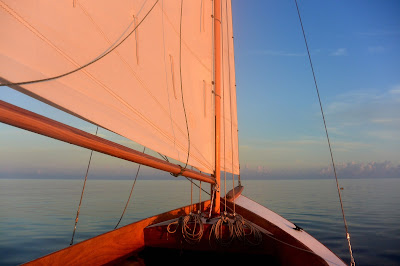 The morning suns reaches over the tops of the pines and paints Spartina's sails orange.  A clear morning after a star-filled night.  A hint of a breeze carries us out of the cove, then disappears.  The forecast calls for no wind until evening. 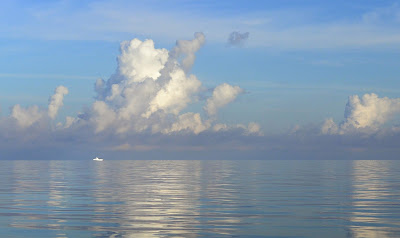 We motor due north towards Tangier, the water reflecting the sky.  Clouds slide over the Bay from the west, the outboard drones at idle speed.  A deadrise working crab pots is a white fleck on the horizon. Three pelicans skim the surface of the water.  Another hint of wind, but nothing more than the suggestion. 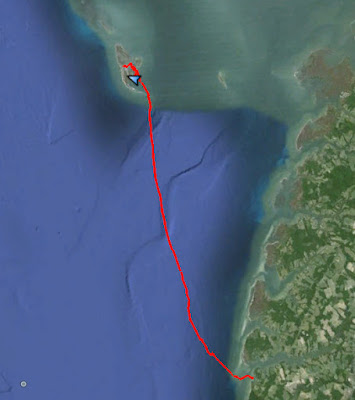 Watts Island, once large enough to support a plantation but now only a narrow strip of sand cover with trees filled with nesting birds, comes in to sight to the northwest at 9:30.  A few minutes later I look through the binoculars to find a water tower ahead and though I can't make it out from this distance I know there is a huge crab painted on the side. 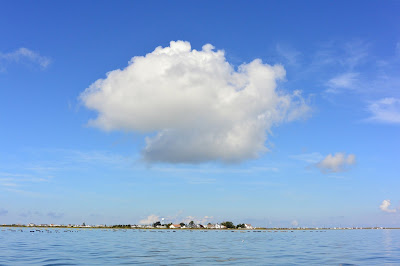 It is early afternoon when we pass Tangier Light, then soon the sand spit that curves around Cod Harbor.  A puffy white cloud hangs over the island.  Two men work on a small skiff, running between a deadrise and black floats spread across the water.  An oyster farm.  It was not there when I passed through last fall, but I had read about it in the spring.  I wave and the men run the skiff over near Spartina.  I asked about the oysters and they tell me the have already raised some to market size.  I wish them well and motor on. 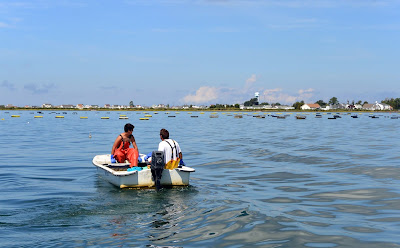 Reaching the channel into the village I see it is a busy day on the water.  Workboats - deadrises and buy boats, crews offloading bushel baskets of crabs - are using the channel, and so are small private boats, more than I have seen in the past.  It is only when I pull up to Milton Parks' docks and see them nearly full that I realize it is the weekend, a busy day for the island.  I motor up to the last spot on the main dock, getting there ahead of two power boats and a larger sailboat, and tie up.  Mr. Parks is nowhere to be found so I walk down the lane to check on the fuel dock and restaurants.  Coming back to the marina I find Mr. Parks and his little scooter out at the end of the pier.  He tells me I look thin and asks if I've been eating ok.  I'm just fine, I tell him, and give him the five dollars for the use of his dock. 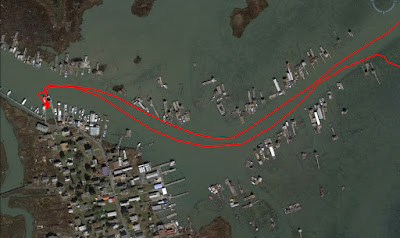 I walk back down the lane, crowded with weekend traffic off the ferries, and head to my favorite restaurant only to find it full.   So I choose the one across the path and order a soft-shell crab sandwich and a glass of iced tea.  An enjoyable lunch to be sure.  Afterwards I top off the fuel can and cast off, making my way through the crab shanties lining the channel. 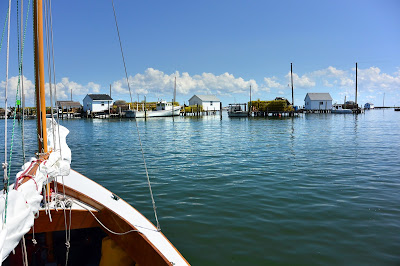 A crab scraper works the shallows behind the shanties, dragging a scrape across the shallow sea grass and pulling out the crabs, the waterman waving as we pass by.  On an incoming tide Spartina motors across the sand flats between Tangier and Port Isobel, the islet to the east that is home to an environmental center, and we drop anchor beyond the new oyster farm in Cod Harbor.  Putting out the anchor I realize it is marked Cod Harbor on the charts but I don't think I've ever heard anyone on Tangier refer to it by that name. 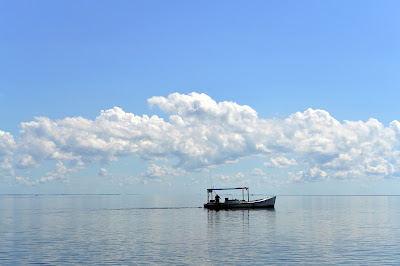 The water over the sand flats is warm as I jump in for a swim.  I am glad to be away from the weekend crowd in the village, finding the quiet peaceful waters of the harbor a joy. 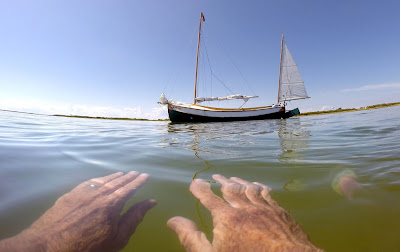 An afternoon nap, freeze dried beef stroganoff for dinner, then an evening of reading.  I write 21.5 nm in my notebook.  The forecast is for tomorrow is wind.  Finally.
Posted by Steve at 8:33 PM

Loving the photos. Some must be from the new camera. Glad you have something worthy to work with again.

Wait, were you holding the camera in your teeth for that last shot?

You got photobombed by a jellyfish.


Sorry, I don't give out photographic secrets on the blog......