Webb Chiles did a few days of local sailing down in New Zealand's Bay of Islands.  He described the winds as "spotty," but as you can see the scenery was beautiful.  You can read his log here. 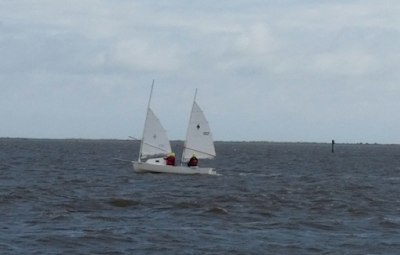 And the water tribe's Blackbeard Challenge is under way on the sounds of North Carolina.  I believe that is Dawn Patrol with friends Paul and Alan aboard in the photo above.  They have a reef or even maybe two reefs tucked in.  Weather has been rough.  I found this report from Dawn:

Some tribes are on the move early this morning. It's still dark out, and has been raining most of the night. SOS and DWSB came into CP1 at 1:15 am and still camped. All others took shelter from the wind a little earlier last night, Marine weather for Pamlico Sound:
SMALL CRAFT ADVISORY IN EFFECT UNTIL 10 AM EDT THIS MORNING
Today... N Winds 15 To 20 Kt With Frequent Gusts To 25 Kt This Morning...Becoming Nw 10 To 15 Kt Late This Morning And Afternoon. Waves 2 To 3 Ft This Morning...Then 1 To 2 Ft. Showers Likely This Morning. Isolated Tstms. A Chance Of Showers This Afternoon. Vsby 1 To 3 Nm Until Afternoon.
Tonight... Sw Winds 10 To 15 Kt. Waves 1 Ft. A Chance Of Showers... Mainly In The Evening.