The water was calm on Swan Creek under the cool blue light before dawn.  I stowed my sleeping gear quickly.  Curt was working on his sails and Alan was starting to bring down the tent on his CS 17. 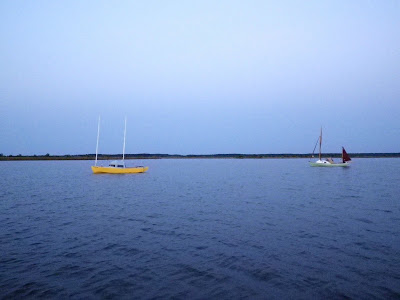 I was under power at 6 a.m. heading to the narrow channel south of the islet, Curt was right behind me.  As I sailed out past the little island I looked back to see Alan sailing out of the creek, once again going over the shallow sand bar to the north of the island. 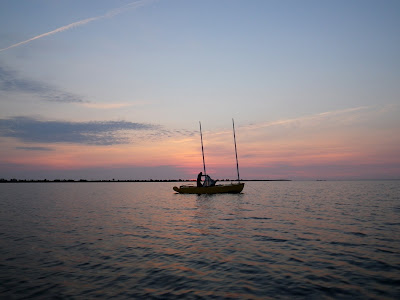 The wind had dropped over night, but was still steady out of the east.  I moved along at 2.5 to 3 knots heading directly into the rising sun.  Curt angled off to the south along the edge of Piney Point Shoal. 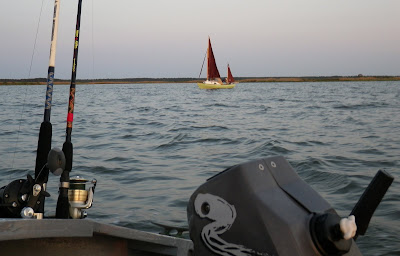 About quarter to seven Curt tacked on Annie and turned towards Oriental. 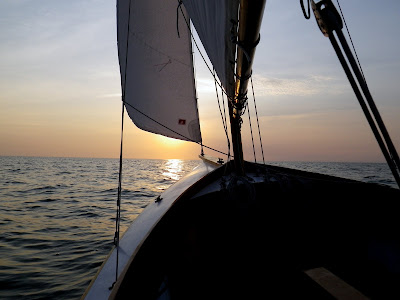 A few minutes later Alan zipped by me shouting "This is my morning commute, I'm going to work!".  He was in fact going to work, making the 16 mile sail to B and B Yacht Designs in Vandemere.  He was flying three sails on the CS 17 - main, mizzen and a fisherman.  The boat, very well handled by Alan, was quick and nimble, seemingly jumping from one wave to the next. 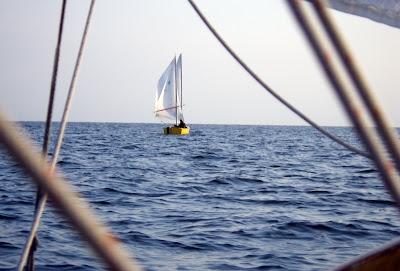 At 7:30 my gps showed that I was crossing my track from two days earlier off of Maw Point.  Where would I go from there?  I wasn't quite sure.  I had not made specific plans for the day.  Explore Middle Bay?  Maybe.  Or ghost the marshes of both Big and Little Porpoise Bays?  Or poke around Mouse Harbor?  They were all within easy reach. 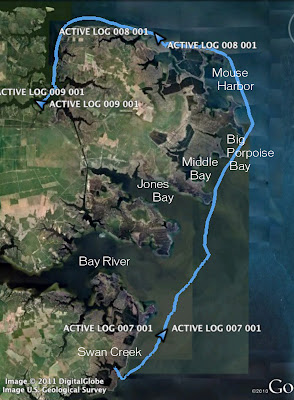 In the back of my mind I had been wanting to sail by a pretty little beach I had heard about from friends Dave and Kristen a couple of weeks earlier.  It was on the south shore of the Pamlico River, west of Pamlico Point and east of Goose Creek and the ICW.  So that would be the plan for the day - explore that little stretch of the river to see what it was like.
So I crossed the mouth of the Bay River, with Alan's sails visible well to the west.  While watching him I saw the spouts of a few dolphins set off against the dark background of the distant trees.  I wondered if he could see them too.  And I continued on past Jones Bay, the Porpoise Bays and the expansive Mouse Harbor. 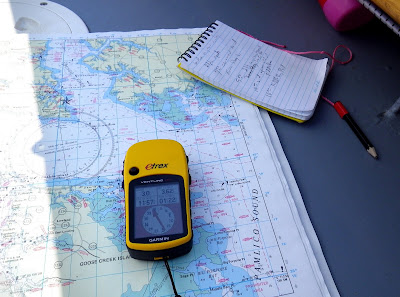 At Pamlico Point I swung to the west as sailed just yards off the marsh.  It was some of the nicest sailing of the entire trip.  The skies were blue, the wind was steady - not strong but at least steady.  And I could not have been happier.  I saw a few small beaches along the way, the finally spotted the crescent beach (marked with a red arrow below) where my kayaking friends had stayed.  I could even see their tracks on the beach.  It was a great spot, one that I will revisit in the future along with the series of creeks - Clark Creek, Middle Prong and Oyster Creek - just west of the kayaker's beach.  I seems like on every day of the trip I spotted places - bays, creeks and marshes - that I wanted to return to and explore.  If I made a list of places, this stretch of the Pamlico River would be very high on that list. 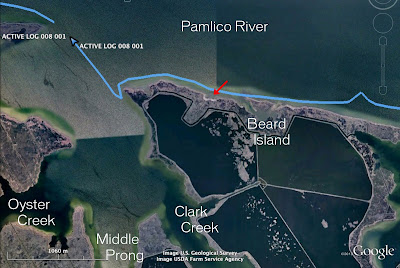 A little after 2:00 I turned south into Goose Creek.  A woman was wading along the shore near an old fish house.  Two boats were tied there, one called Papa's Rose from Hobucken.  There were a few more houses along the shore, then trees.  Then Dixon Creek and soon a favorite anchorage that Bruce and I had visited twice before and for some reason called Faux Dixon Creek, and just now I can't remember the correct name for the creek.  I considered anchoring there for the night, but it was a little too early. 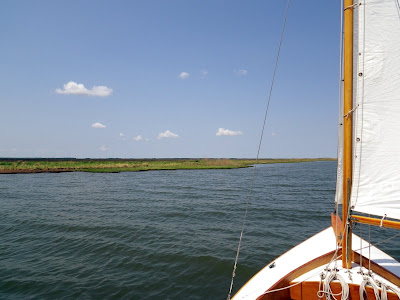 So I continued south as the afternoon breeze picked up, sailing past Snode Creek to the west and Eastham Creek with the tall rigging of fishing boats showing through the trees.  At Eastham Creek Point a bald eagle settled at the top of a tall, dying tree.
The wind picked up some more and I flew through a maze of crab pots to the east of the channel.  And then I turned west into Campbell Creek and anchored where the tall pine trees blocked the south wind and settled in for the last night of the trip.  A simple dinner, a few minutes of reading and then I slipped off to sleep. 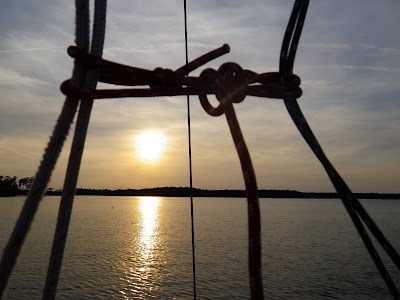