Bruce and I are trying to work out a conference call today.  We hope to sit down at our computers with google earth open and go over the route, options, etc, and hammer out a few details. 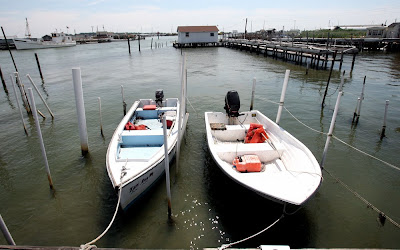 As I mentioned a few days ago that plan has shifted slightly.  We'll be going to Tangier Island instead of Smith Island.  I've got to call Parks Marina to check on docking - most of the waterfront in Tangier is taken up by working boats and the watermen's skiffs.  (And as I checked for contact information on the marina I noticed the address - 16070 Parks Marina Lane - and had to wonder how do you get a street number as high as 16070 on an island that is only a couple of miles long.)  Above you see a couple of the skiffs, with the crab houses on stilts and their rows of shedding tanks for soft shell crabs, in the background.  At left is the channel that cuts east/west across the island and on the far side of the channel is a very classic Chesapeake Bay workboat - I think it is a "buy boat", a boat that picks up the catch from the watermen and carries it to the fish houses.
Tuesday will be the first full moon in May, the traditional peak for the soft shell season.  I see some soft shell crab sandwiches at The Fisherman's Corner in our future.  The shedding tanks are just a brief walk from the restaurant - soft shell crabs do not get any fresher than that. 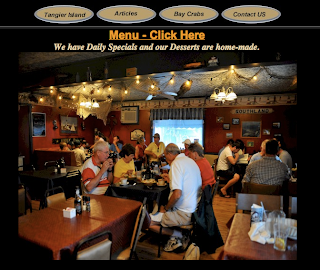 Bruce did ask about the weather in an email a few days ago.  It is hard to predict a week out, but below is the forecast for the first day of the trip.  It looks like a high pressure system will be moving into the Mid-Atlantic.  The forecast does look good, but I won't take any forecast seriously until two or three days before we start.  And what does it really matter?  As Bruce has said on a couple of other occasions when the weather was not the best  - "We're going anyway." 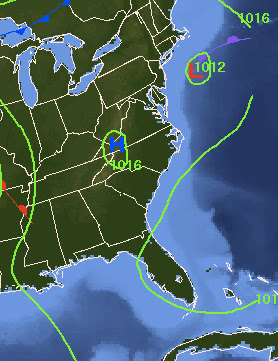 I think Bruce was probably more concerned about the temperatures.  Last June we sailed with Paul and Dawn during a record setting heat wave.  It was very hot three or four days during the trip, particularly on day seven when we had a heat index of 105 degrees and very little wind.  Below you can see Paul, Dawn and Bruce cooling off in the evening at Beard Creek.  Cold beer never tasted so good. 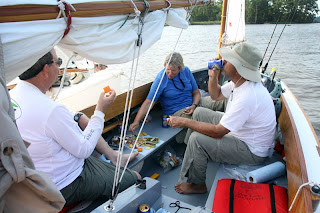 I expect the temperatures for the bay trip will be much more reasonable.

Two food questions: re shrimp, do you ever simmer shells and heads briefly to make a killer broth for other dishes? I think you could freeze it. I can't throw away the shells anymore!
Re cous cous: Do you use plain or flavored? Do you reconstitute it with water or chicken broth or something else? I need to learn to use it for camping. Thanks! G

No, I have never done that. But I have heard/read about it. We really don't get much in the way of head-on shrimp. I've also heard of it being done with lobster.
On the shells, I do like them for the compost bin. I put shrimp shells, crab shells, clam shells, etc in there. In a couple of weeks we'll be doing a crawfish boil with 20 lbs, of live crawfish - that will be a big day for the compost pile.

On cous cous I am using the brand (don't recall what it is) that I can buy at Target. It comes in a box, but all contents inside are sealed in a sturdy plastic pouch. Throw away the box, pouch is perfect for camping/boats. I use water to cook. On seasoning, I use 1/2 the packet, 1/3 the packet or sometimes none at all. Then I sprinkle with red pepper flakes and parmesan cheese, both out of the little packets from Domino's pizza.
Cous cous is easy, cheap and goes with about anything.

Thanks, Steve. I asked about cous cous after seeing your picture with the roasted peppers and parmesan. Cous cous is very quick and easy. I've only used the kind with a seasoning pack that comes with.
You gave me an idea -- to throw my shrimp shells in the compost bin after I make broth from them. I use the broth for making shrimp and grits or shrimp with simmered tomato and garlic and pasta. Very good! Very, very, very easy! (But not on a boat. Just at home.) I'll be camping and cooking and eating and paddling at the coast this weekend.