I sailed off anchor from Long Bay at 6:30 in the morning, about a half hour later than usual.  It was the only uncomfortable anchorage of the trip and I did not sleep as well as usual.  The wind had swung east, as forecasted, but swells left over from the day's NE winds rocked Spartina side to side.  But still it was a beautiful morning, cloudless with a nice breeze out of the east. 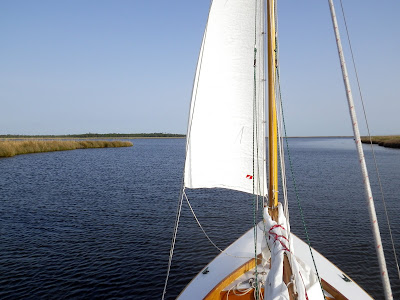 I sailed up Long Bay at 3.5 knots, sighting the eastern entrance to Old Canal before 7.  I dropped the main and let the breeze carry me into the canal.  Older, narrower and a little more rugged than the Thorofare Canal, it had a nice feel to it.  A couple of boats, a crabber and some sport fisherman, past me coming the other way.  Plenty of room for us all in the canal as I sailed at just over a knot.  Forty five minutes after entering the canal I slipped out to the west end and turned south on Turnagain Bay to take a look at one of the most pristine marshes I have seen on the Carolina coast.  No markers, no structures, just marsh grass and some trees on shore.  Good protection from just about all directions, quiet and peaceful.  I'll put that spot on the list for a future anchorage. 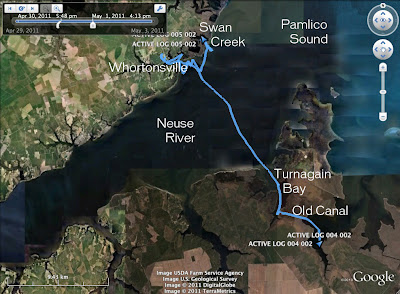 The plan for the day was a last minute change as I started the trip.  Curt, a friend from St. Augustine who sails a Drascombe, had been planning a trip in North Carolina.  The night before I left home Curt emailed that he was heading up a day early and wondered it we could meet some where.  "How about Swan Creek?" I asked.

So my sail for the day would be relative short - Long Bay, down the Old Canal, up Turnagain Bay, across the Neuse River to Swan Creek on the western shore. 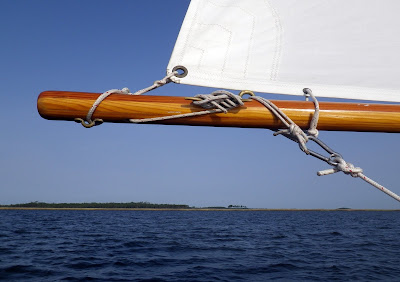 The east wind was excellent heading up Turnagain Bay and across the Neuse River.  Spartina moved along at anywhere between 3 and 5 knots throughout the morning.  I relaxed with the easy sailing, snacked on bits of dried fruit as I enjoyed the great weather.

We moved along so well I decided to stop in at Whortonsville to see if I could find Curt rigging Annie.  With just one marina, Hideaway Marina off of Broad Creek, I figured it would not be that hard to find him.  It did take me a while to find the marina, I took a wrong turn to the wrong creek, but soon found my way and there was Curt rigging Annie. 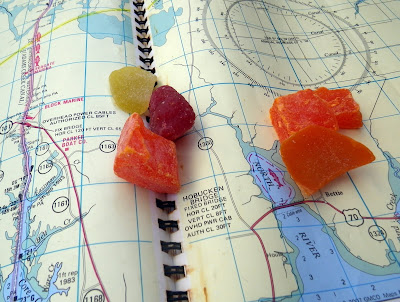 We visited for a few minutes then I headed back out while he finished rigging.  I left Broad Creek and sailed north over top the shoal off of Piney Point, raising the centerboard and rudder as I went.  I saw Annie come out of the creek.  Curt opted to round the shoal which involved  a few tacks working his way out onto the Neuse into the east wind.
Swan Creek was easy to find and I sailed in under mizzen and jib, touching bottom once of twice as I left the narrow, unmarked channel.  Once inside I dropped the jib and with the outboard returned to the creek entrance to check the depths some more.  Then I came out again as I saw Annie approaching the shore, showing Curt where the channel was located (though it was clear he did not need any help from me). 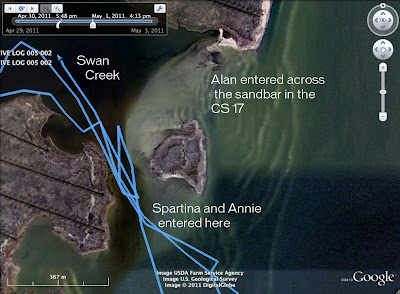 Once inside we rafted up in what proved to be an excellent anchorage.  Three or four feet deep, well protected on all sides.  I had sailed past the creek at least three times over the last few years, I'm glad we finally checked it out.
Curt and I rafted up our boats, he broke out a couple of beers for us and we both got out some snacks.  It was a nice afternoon of relaxing and talking about boats, trip and our experiences in the outer banks (Curt lived in the outer banks a couple of decades ago.) 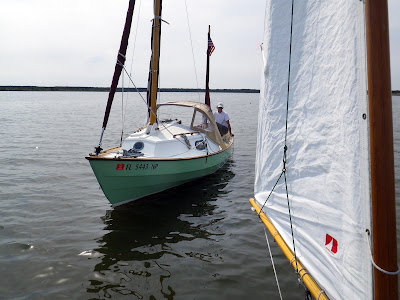 Se we are sitting there talking and enjoying the beers when I look east out past the marsh and see the white sails of a catch ketch approaching.  It was Alan sailing his Core Sound 17 from his home in Vandemere to join us for the evening.  He was coming from the north and spotted us across a very shallow sandbar north of the island at the mouth of the creek.  I wanted to let him know that the deeper channel was to the south of the little islet, but had no way of communicating with him.  It wasn't a problem at all for Alan - sailing wing and wing he skipped right over the sandbar into Swan Creek. 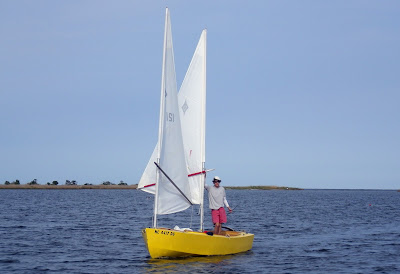 Alan rounded up behind us and tied off his boat, joining us for the evening.  It was a great time - more talk about boats, boat building (Alan's working for Graham Byrnes at B and B Yachts Design), EC adventures and Alan's sail halfway around the world.  Thanks for joining us Alan, good to see you.  And thanks Curt for making the trip up a day early, I enjoyed meeting you and seeing Annie. 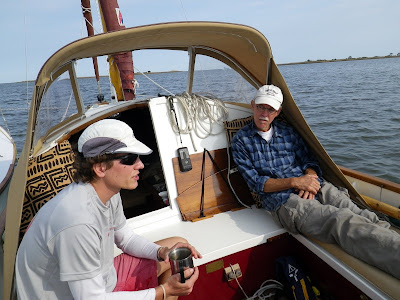 After a light dinner it started to get dark,  we all cast off from each other and rigged our boats for the night. 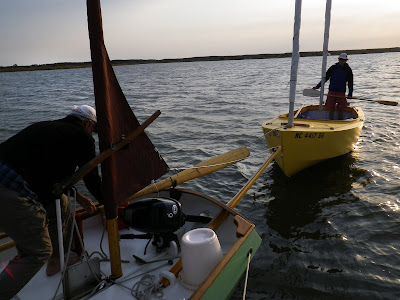 Later that evening I peeked out of my bivy to see Alan's CS 17 just a little to the south of me, Curt's Annie to the west.  The boats were just shadows in the darkness, save for the anchor lights glowing in the rigging.
steve
24.7 nautical miles
7:57 moving time
3.1 knots moving average
Posted by Steve at 10:11 AM

Steve: read his blog has become a habit! I really enjoy reading and photos, very nearly seems to be there. Take this opportunity to ask a question (if you think this is not the place, we will gladly spend my email) as I have in mind to discuss navigator, but it scares me a little building, I discovered the Core Sound, here, would be its comparison , regarding the difficulties in construction (never built) and the benefits to the candle.
Greetings from the South
Darwin

The traslator google, is "sail" no candle! Sorry

Darwin,
I did have to wonder what you meant by candle. Thanks for clarifying.
Both the navigator and core sound 17 are excellent boats, I do not think you could go wrong with either. I like both the yawl rig and the cat ketch, I think both have advantages over a sloop rig.
I do not know enough about the construction style of the core sound, though I think there is a good description on the b and b yachts website.
The navigator is much like the construction of the pathfinder. I was able to build the pathfinder and I have little or no woodworking skills. I suspect you could build both the cs and the navigator.
Both are great boats. Much of it comes down to style and what you like in the boat. I like the looks of the navigator/pathfinder, I like the stability and storage area too. The cs is a fast boat, no doubt, excellent for racing and I'm sure cruising too.
I don't think there is a bad choice between the two.

Thanks Steve, very clear answer, I am actually in love with browser, but the cs I found it easier to build, in addition to sail only with that cat ketch rig, it also seems easier, but the lines of J Welsford really do not have equal !
Thanks again, greetings and await the next chapter of the blog.
Darwin

Dawn and I camped just south of the exit of Old Canal into Turnagain Bay during Vacation to Hell I. It was great in the evening with a nice breeze, but that died overnight, and the mosquitoes were voracious in the morning--even 50-75 meters offshore.

Sure am enjoying the trip log. Lots of new places to go!

Dave,
that's the thing about those marshes. It all depends on wind, humidity and who knows what else. Worst case I hunker down in my bivy with the mosquito mesh zipped closed and the hope for the best in the a.m.
I was fortunate on this last trip, no problem to speak of at any of the anchorages.