Today was the first time this year that it started to feel like summer.  Early morning thunderstorms.  A little hot and muggy late morning.  Nice breeze all day.  I wish I had been out sailing but I had to work.  Crossing the Berkley Bridge over the Elizabeth River I could count at least a dozen snow birds anchored in Crawford Bay, plus a couple of dozen more boats tied up at the Waterside Marina.  Maybe we'll come across some of those same boats up around Tilghman Island or Oxford. 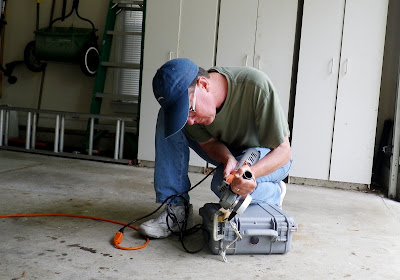 I did get off from work mid-afternoon, in time to come home and do a little work.  I used a grinder to cut the bronze snap hook off of the Pelican waterproof box that keep Bruce's nice Canon camera dry and safe.  The spring on the hook had failed and it needed to be replaced.
On solo sails I carry just my Pentax Optio camera, when Bruce is along we have both the Pentax and his Canon dslr with both wide angle and telephoto lenses.  With two of us on board we've got enough hands to manage both the boat and the camera, the result being both more and (hopefully) better images. 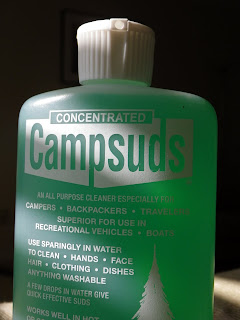 I also bought a bottle of Campsuds,  our standard dish cleaning liquid on Spartina.  We've been using an old bottle of Bruce's for a long while now - only a few drops are needed for each washing so it seemed to last forever.  That bottle was getting low, so I bought this 8 oz bottle to refill the smaller one.  This current supply will last for years. 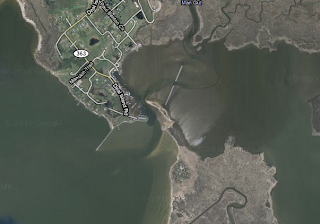 I've also been looking over the charts and google earth images of the route.  I'm pretty familiar with most places along the way.  But there are some new spots such as Deal Island, above, that I have only seen from a distance.  From the chart book and this image there appear to be some breakwaters and a narrow entrance to the harbor.  Being a port for working boats I expect there will be steady traffic in the channel and we'll probably just follow another boat in, but it is good to have an idea of where we are going.

We'll be visiting some of my favorite places with interesting names - Bloody Point and Punch Island Creek being two of them.  A new place for this trip will be Slaughter Creek.  I really love names like that, always wonder what inspired them.  And I'm glad to have those names in my log book. 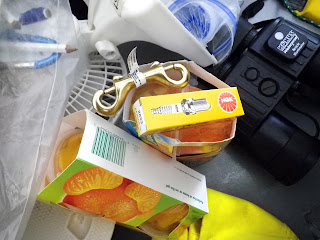 Spartina is a mess right now as I've dropped several items in there wating for the junk on the bunk day.  You can see the new hook for the Pelican box, a spare spark plug, binoculars and some fruit cups.  The fan beneath all the stuff is the one I use to dry out the storage area beneath the decks after each sail. 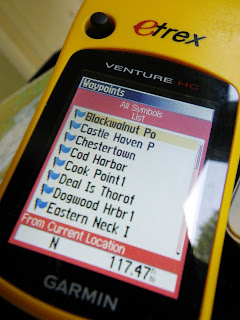 I also cleared the gps of both the North Carolina waypoints and the tracks from the walkabout.  I'm always reluctant to clear the tracks of a sail, even though I have copied a .gpx file onto my computer.  I have an irrational attachment to the digital information saved each night at anchor -  the speeds, directions and distances covered.  There are a lot of memories tucked into that information.  But I needed to create room for the new tracks.

I wonder where we'll drop the anchor, hit the "ok" button on the SPOT and click "save track" on the gps the first night out of Onancock.  Watts Island?  Or down at the little sand hook called Cod Harbor at the south end of Tangier Island?  We'll see.