I wake to overcast skies at a solid ENE wind.  Spartina is damp from last night's storm, I'm dry and comfortable in the bivy.  With a short sail to Manteo ahead of me, I dress quickly, roll up the sleeping gear, still damp, and tuck it under the foredeck, then sponge out the water collected on the bunk flat and in the cockpit sole. 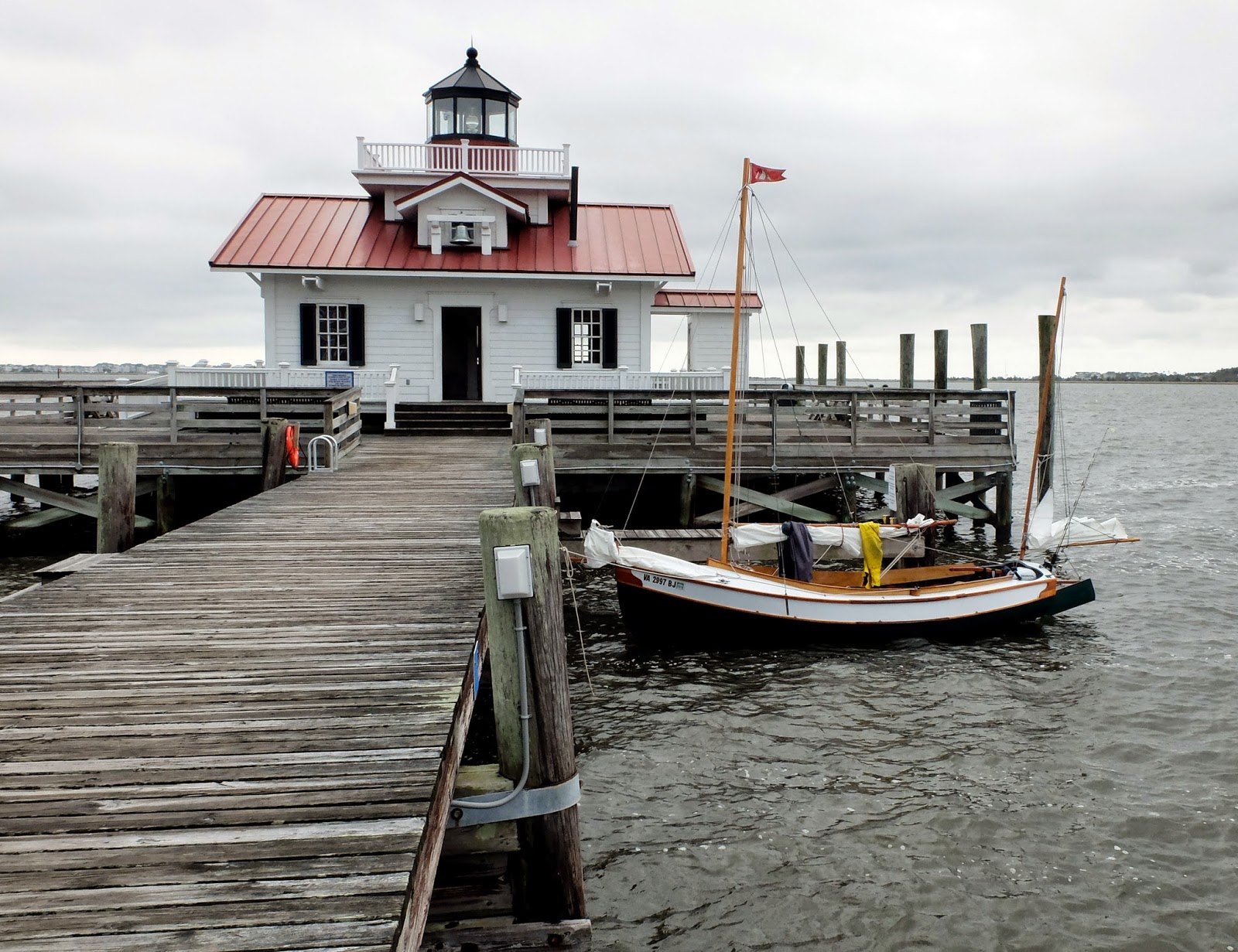 Before 7:00 we sail off anchor under mizzen, jib and a double reefed main.  South down Broad Creek, rounding the marshy point and turning north in the narrow channel up Roanoke Sound, we share the narrow channel with large offshore fishing boats headed south.  They all slow down and drop their wakes, maybe out of courtesy or maybe to get a look at the little yawl and sailor covered in foul weather gear on a grey, gusty morning. 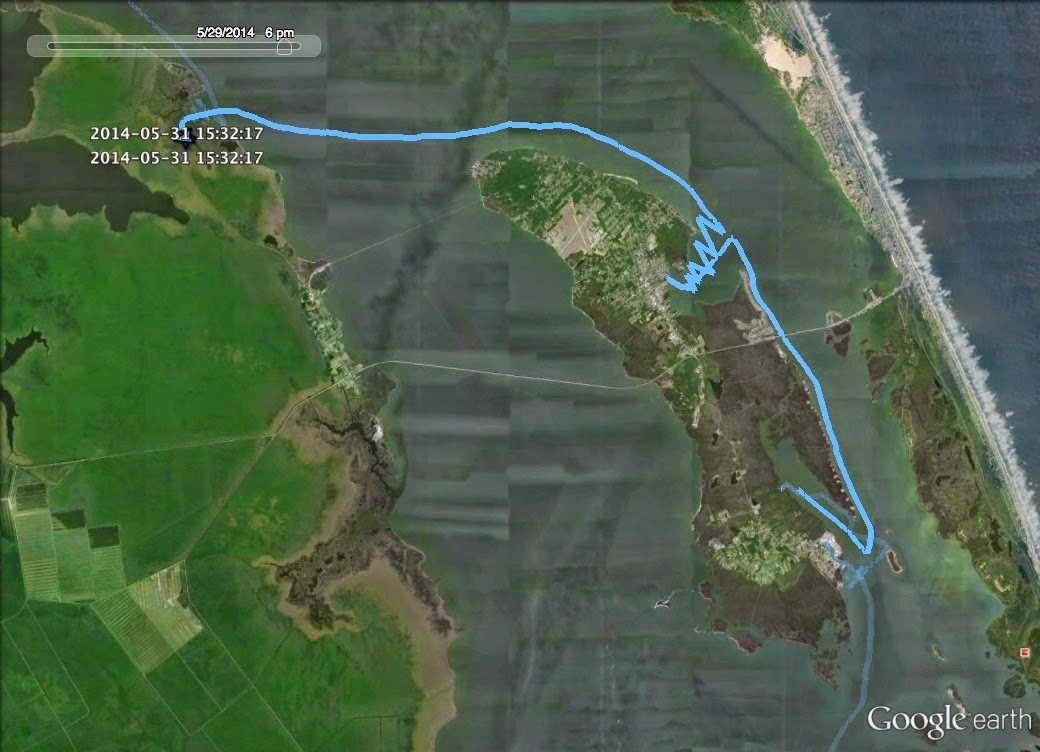 Under the bridge that connects Roanoke Island to the Outer Banks we are caught in the wind shadow of the bridge and the tide carries us the wrong way.  I crank up the outboard to nudge us through.  We reach Ballast Point a little after 8:00 making 4.6 knots under increasing wind.  We turn downwind west into Shallowbag Bay and after seeing the bay for over twenty years from the little town of Manteo I am surprised to see it looks much different than I expected.  From the town's waterfront I had seen only a small bay that to lead directly to the town.  From the water, the bay is much larger than I had imagined and, at first, I don't even see the town - just a wooded shoreline and some buildings to the south.  Farther into the bay the town finally begins to emerge, the replica of the Roanoke Marshes lighthouse first, then the docks and boat building shops.  Yes, now I know where I am. 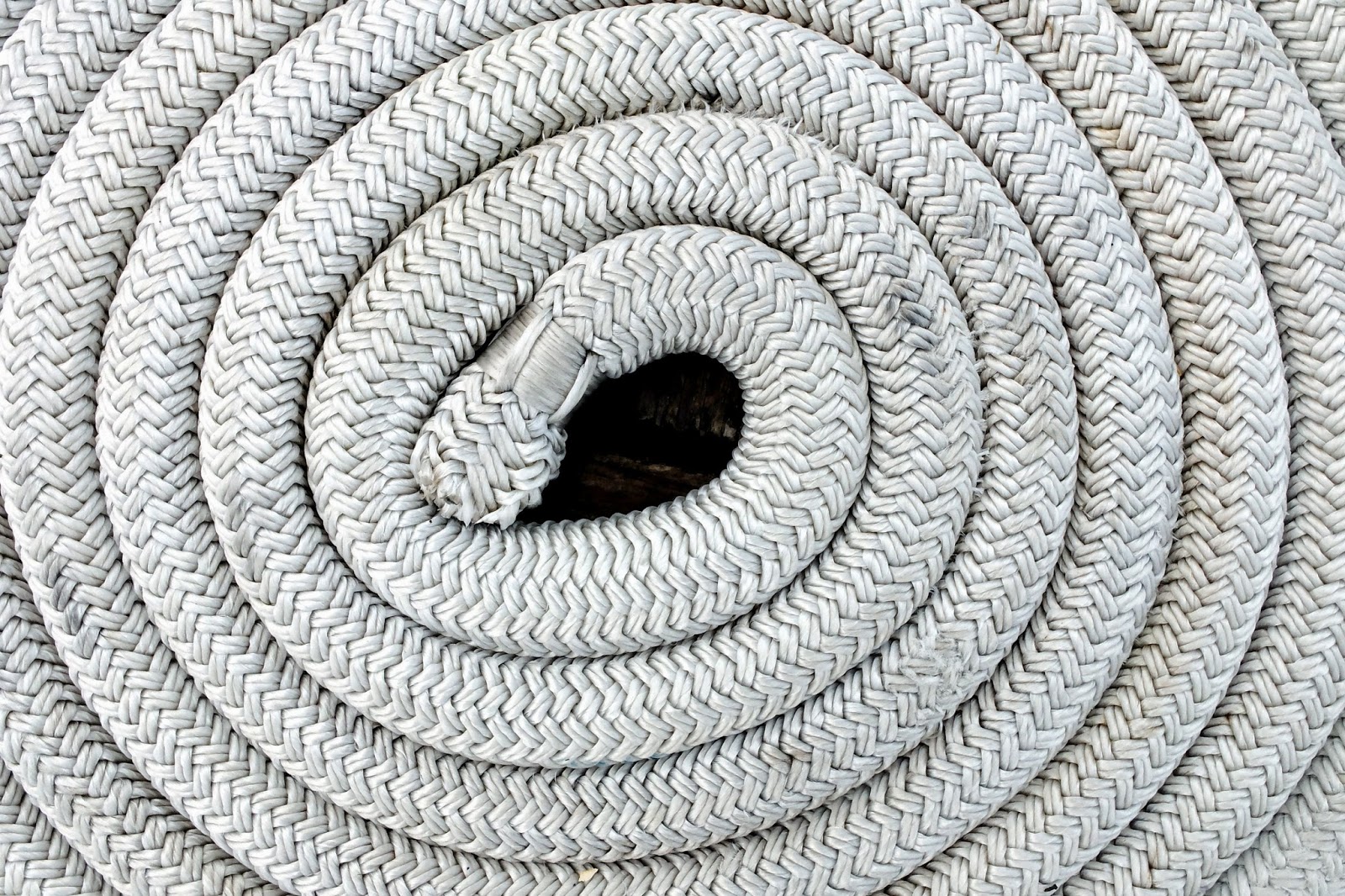 We tie up the free public docks near the lighthouse, spread out the the bivy and foul weather gear to dry as the overcast begins to lighten.  I walk up to a coffee shop to get a glass of iced tea and charge my phone battery.  There is a man sitting on the couch in the shop, head tilted forward and in a deep sleep.  I have my tea outside on the porch, send some emails and relax.  Back into the shop 30 minutes later the man is still asleep.  At least he doesn't snore.  At the Roanoke Island Maritime Museum they let me plug in my camera battery chargers.  One gentleman asks if that was a Drascombe I was sailing.  I tell him no, and I am glad when he doesn't argue with me.

A walk through town, a visit to the nice bookstore where I've bought booked for almost 30 years, and lunch at a little restaurant as the clouds give way to blue skies. 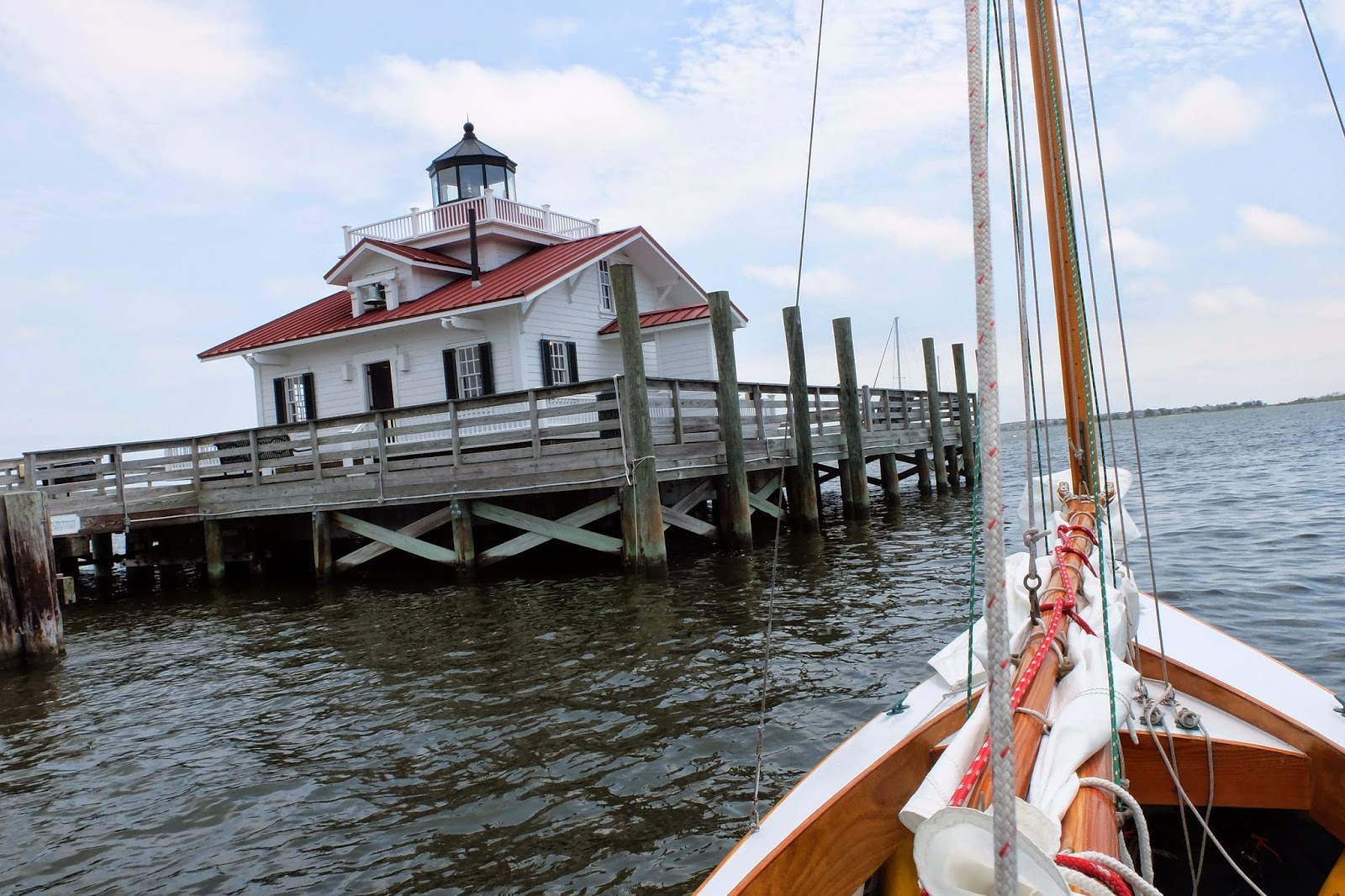 Under sail at 12:30, I look back at the waterfront to where Clara's used to be.  We first ate their twenty-some years ago, before we were married and before kids.  That was a special place for us to go, a visit to Manteo Bookseller and then lunch at Clara's where we could look out over the docks and Shallowbag Bay.  I find myself wondering if I was sitting up in that restaurant and had seen a small yawl come in on a gusty, rainy morning, sailor in foul weather gear and wearing a broad brimmed hat.....Would I have recognized myself?  I don't think so. 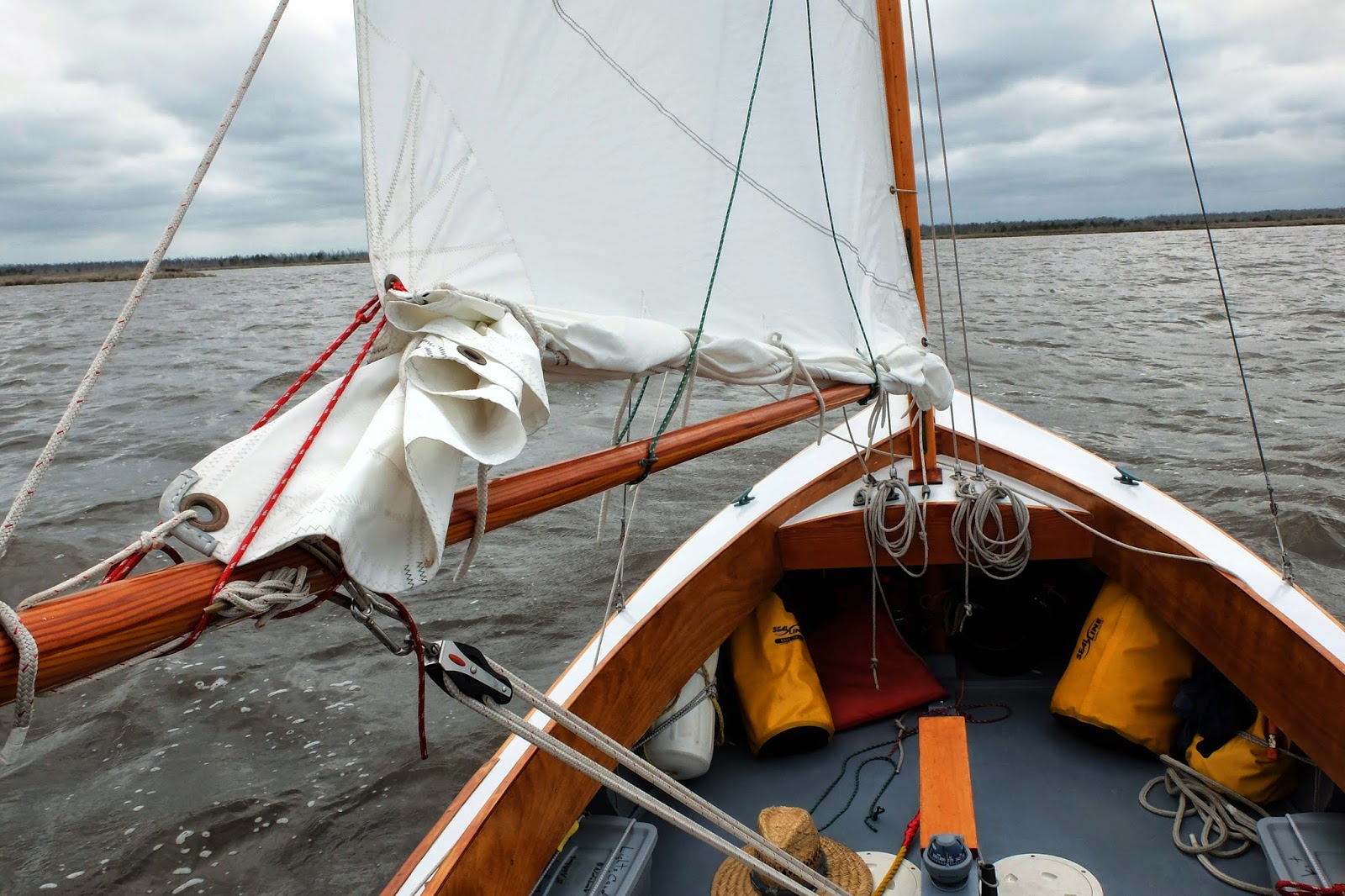 We tack out of Shallowbag Bay under mizzen, jib and still double reefed main.  I could shake out one reef, but there is no rush and I am feeling lazy.  But I do take a shortcut leaving the bay, cutting the corner to head north into Roanoke Sound.  I realize I should look closer at the charts as the cb drags along the sandy bottom.  I raise it a little, then a little more as both cb and rudder touch bottom and I look over the side to see eel grass.  I raise both some more and let the wind push us off the shallows.

We sail up along the northeast shore of Roanoke Island, past the site of the Lost Colony, then at the top of the island we turn downwind to cross Croatan Sound into Peter Mashoes Creek.  I had anchored off the creek last year on a blazingly hot day, but with a NE wind we wind our way back past the sand spits following our gps and advice from Outer Banks friend Jim.  At 3:30 we round up in a shallow bay, surrounded by beaches and marshes, drop the anchor.  I lay back in the cockpit and take a nap. 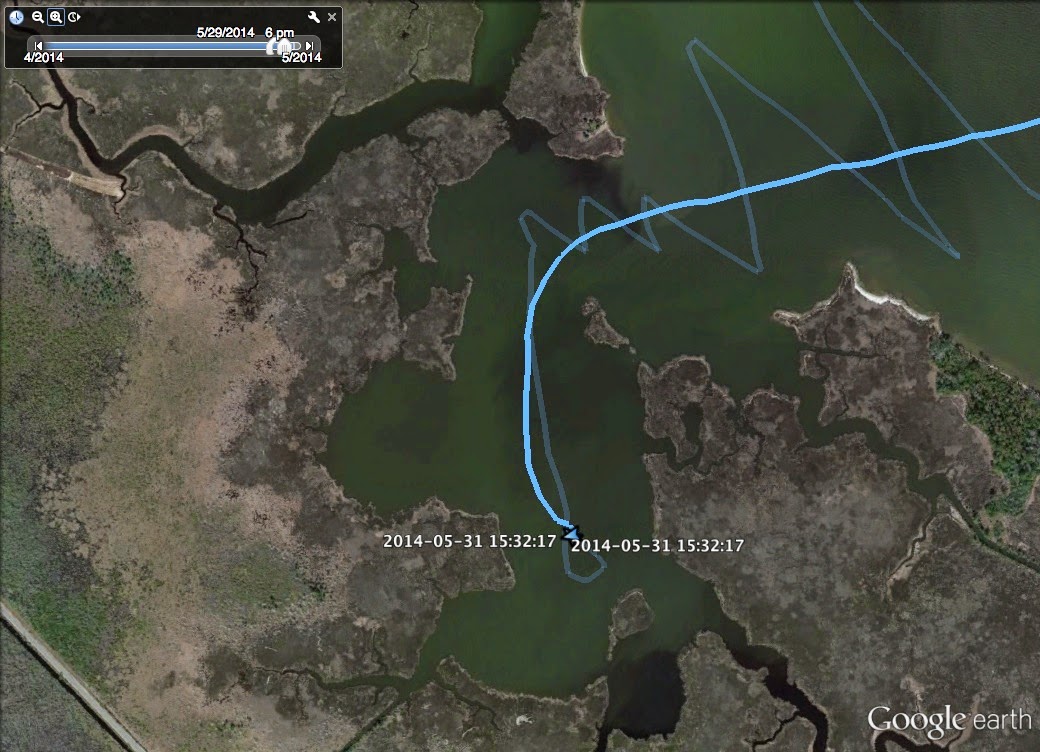 Foolishly, we let ourselves get caught between a lee shore, pound net and a shoal two weeks ago on the north headland of Peter Mashoes Creek.

The wind picked up to 25 out of the NE blowing against an incoming tide from Oregon Inlet. This created 3' waves on super short intervals.

Once outside that current hugging the shoreline, it was peaceful again.

Local sailing is so easy with no currents and tides in the areas we usually frequent. I needed that wake up call and my wife needed the experience, but we broke more stuff that day than in the last 8 years.

We really enjoy your logs and photos, it's a nice inspirational break from fixing things . . .

Strong NE wind in July, how strange is that? And those pound nets always make me a little anxious. Thanks, as always, for the tips on anchorages. I'll be back to explore Peter Mashoes Creek a little more someday.