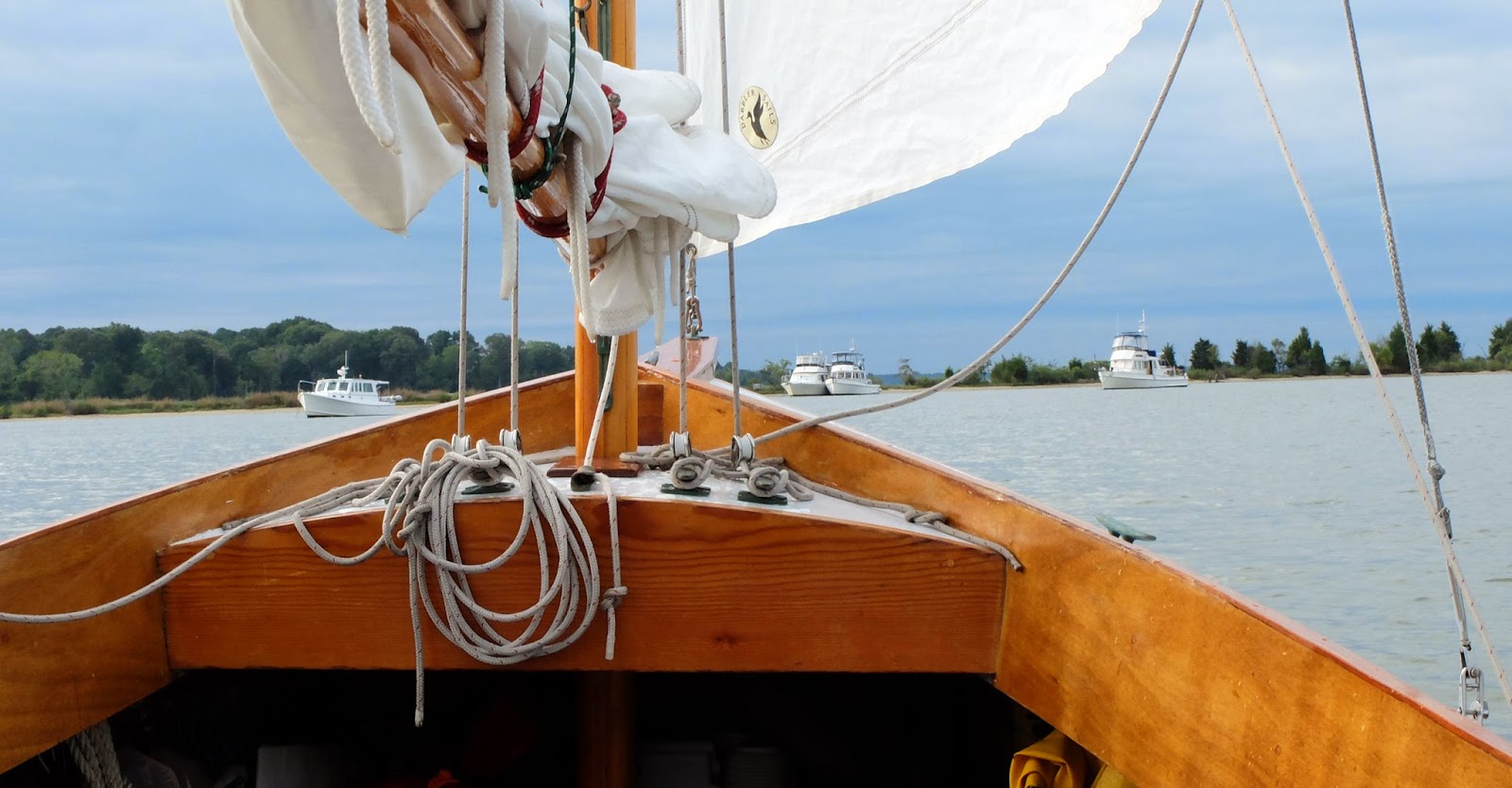 In the comfort of my sleeping bag I sleep later than usual.  I wake, lift my head to see grey skies out of the back of the boom tent.  I can hear the wind and feel the coolness of the morning.

Just after 8:00 we sail off anchor under mizzen and jib.  The main is wrapped tightly with a the boom and gaff, both sets of reef points already tied.  A steady north breeze rushes through the trees around our little cove.  I wonder what the wind will be like away from the cove and out on the creek, out on the river.  Spartina sails quietly downwind past the trawlers anchored in La Trappe Creek.  A woman watches me from the stern of an old classic power boat, craning her head as we slip out of her sight.  Past the anchorage we round the sand spit and catch the outgoing tide to the Choptank River. 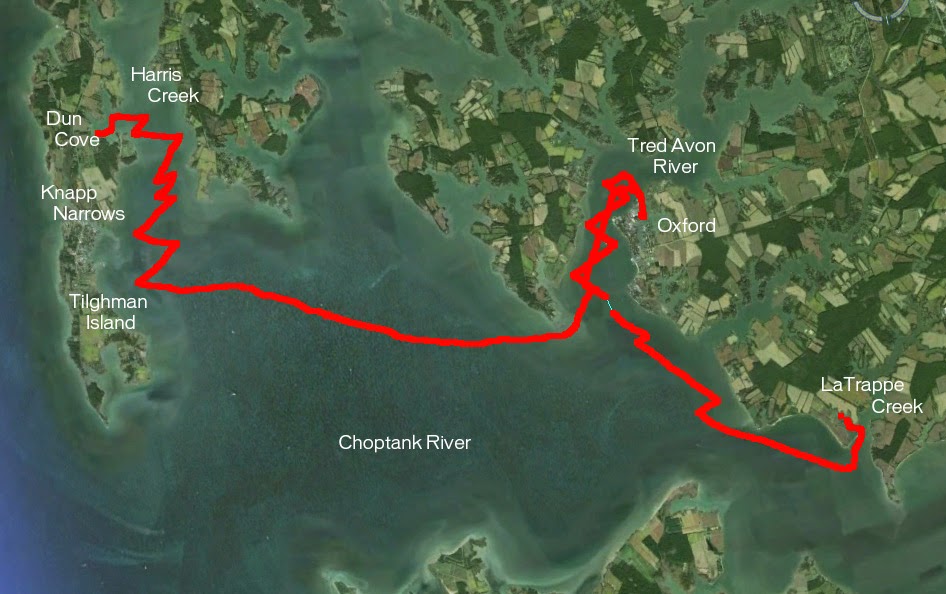 I am pleasantly surprised by the wind out on the river, it is not nearly what I had expected.  We raise a double reefed main, soon making six knots with wind just forward of the beam on our way to Oxford.  Just wonderful sailing as the low overcast gives way to blue skies.  At Chlora Point the shoreline falls away to the NE and we make a long tack in closer to shore where the waves are smaller.  In the calmer water we shake out a reef.  And again, just past Island Creek, one more tack into to smoother water, the sun catching the white spray coming from Spartina's bow.  Then a long run to the Tred Avon River, tacking inside of Benoni Point.  The waves, running down the length of the Tred Avon, are much steeper and the wind feels stronger.  I start a series of tacks up towards the entrance channel to Oxford. 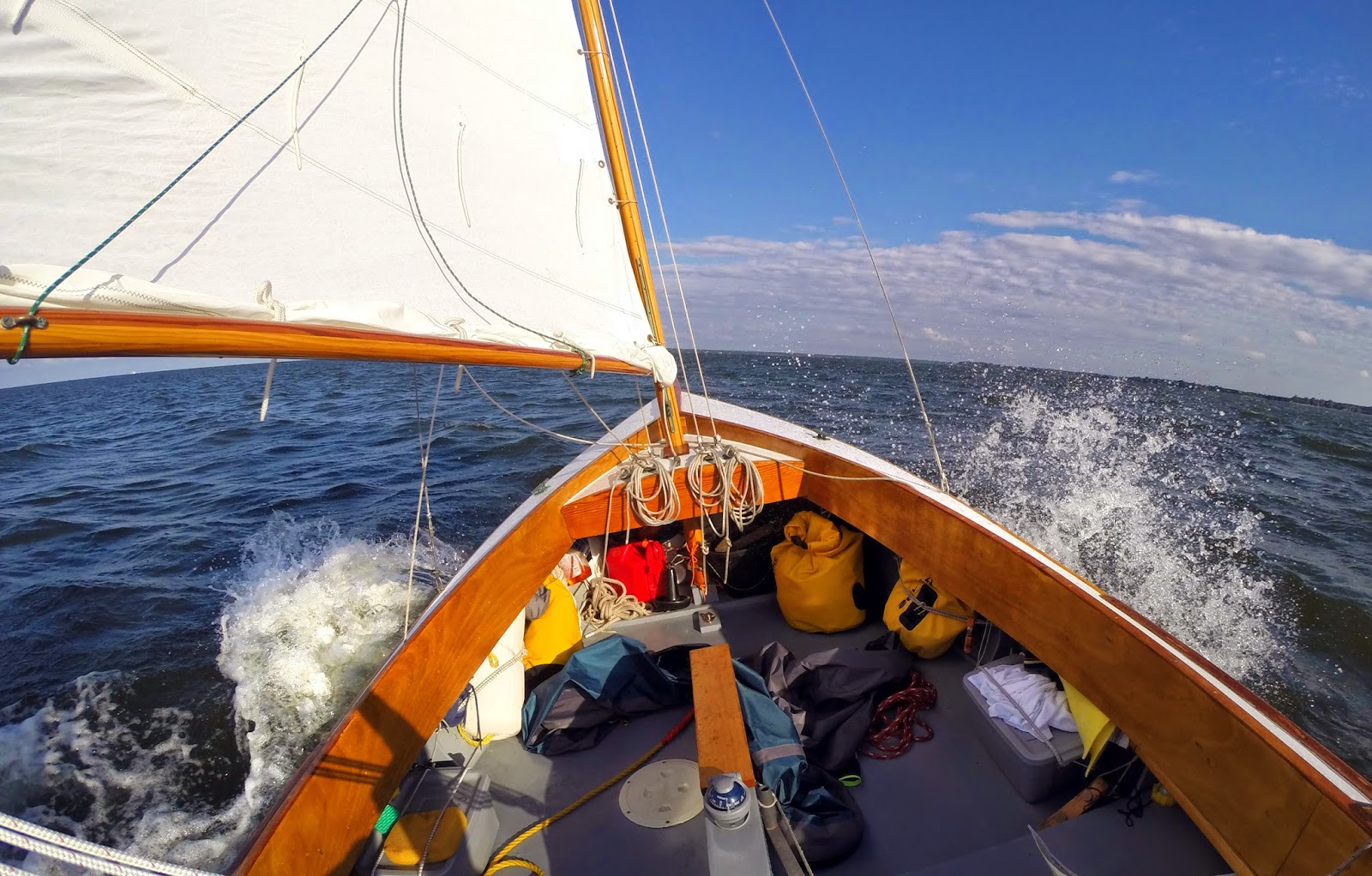 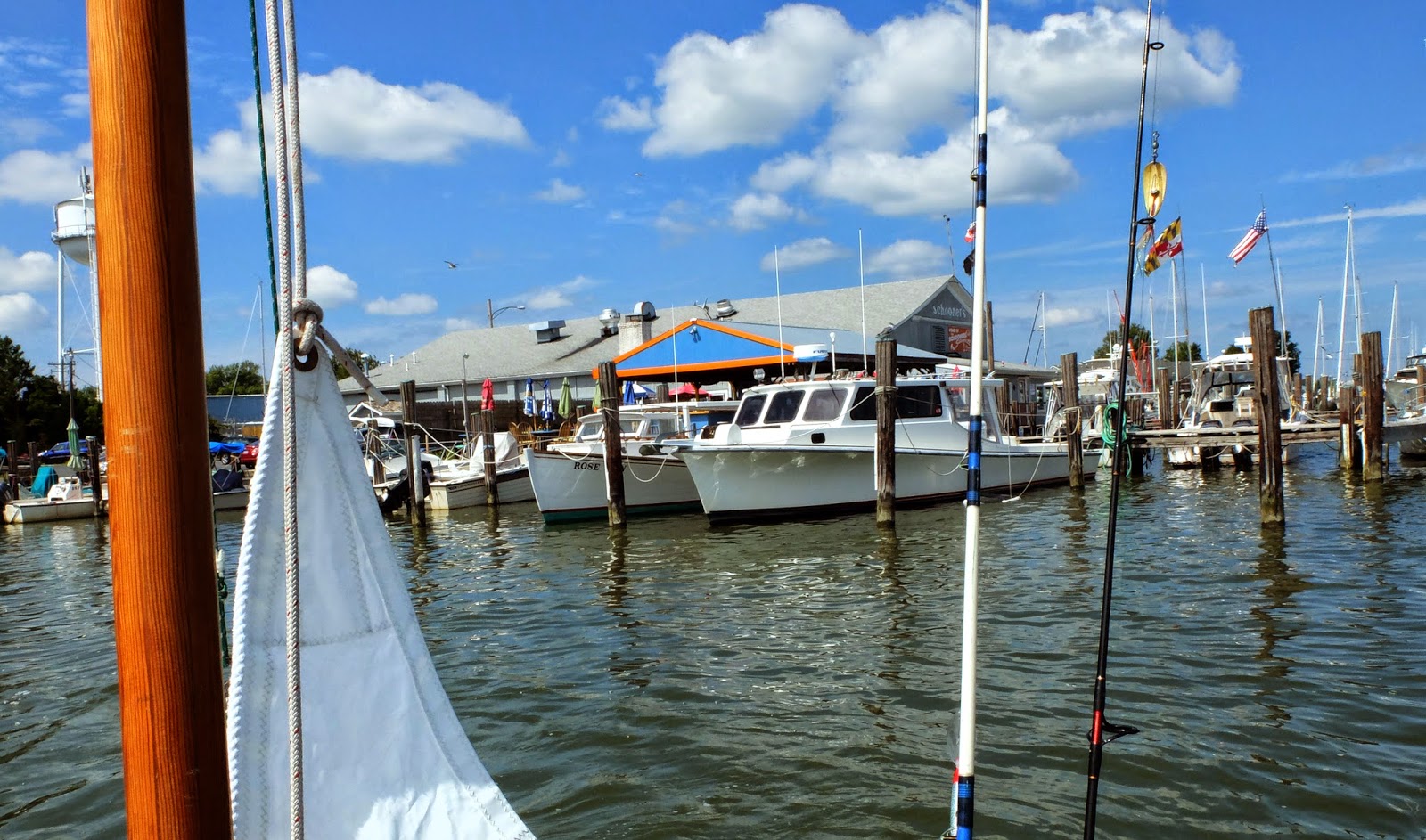 We round up outside the entrance channel to Town Creek and motor into the harbor.  At Schooners I tie up in the last slip at the end of the dock, run to check with the waitress to see if we are ok there.  She says we are fine.  Back at Spartina I spread out the sleeping bag and bivy on the deck to make sure they are dry.  I take an nice walk into town to pick up a couple gallon bottles of water and a couple of bottles of green tea - something that has become a treat for me on cruises though I don't know why, I don't drink it at any other time.  Back at Schooners it is an excellent lunch of a big burger, perfectly cooked, french fries and four glasses of iced tea. 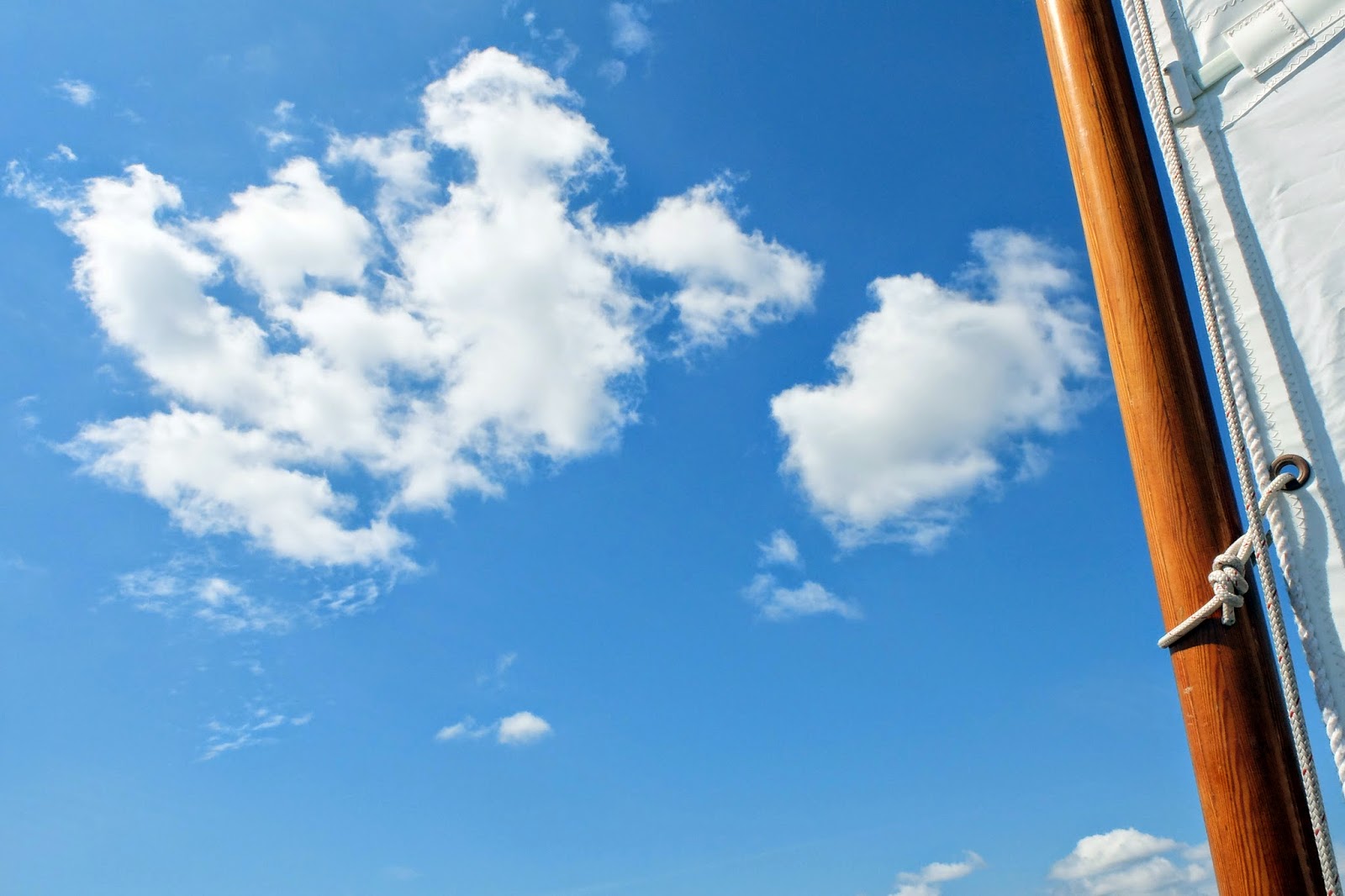 Back on the water at 1:00, the tiller looks like a clothes line draped with two buffs and a tee-shirt as we sail downwind on the Tred Avon.  Benoni Point by 2:00 and we turn west towards Tilghman Island under blue skies and white cotton ball clouds.  The wind comes and goes, much lighter than in the morning though it never completely dies as we sail west at two and a half to four knots.  In the distance I can see a skipjack sailing into Dogwood Harbor.

We are just off Dogwood Harbor by 4:00 and begin a series of tacks up Harris Creek.  A nice little cat boat slips out of Knapp Narrows ahead of us and we spend the evening sailing in her wake as she works her way into the wind and falling tide.  Eventually the cat boat turns toward the eastern shore of the creek.  We turn to the west and with one last tack slip into Dun Cove.  Three large cruisers are anchored just inside the cove, the crews sitting in the cockpits with evening cocktails.  Under full sail we sail past their sterns drawing curious looks and friendly waves.  We head to the southwest corner of the cove, round up and drop anchor.  A light dinner of tuna salad, fruit and sparkling water.  No rain in the forecast tonight, but there are a couple of houses nearby on shore.  I set up the tent for a little privacy, with the front corners vented, and slip into the bivy for the night. 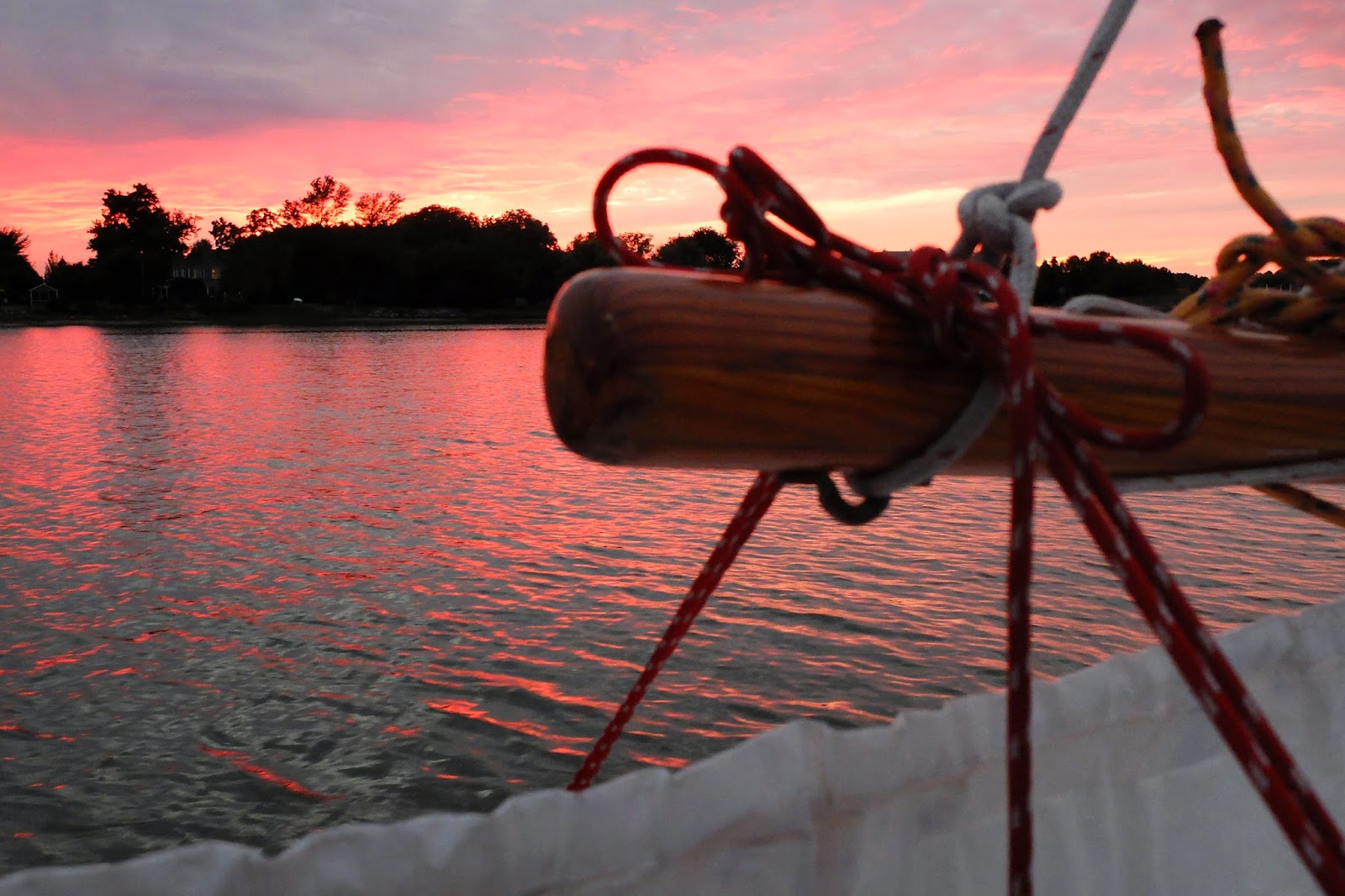