friends on the water: the Blackbeard Challenge

I received a very nice email from Paul - Dances with SandyBottom - about the Watertribe's Blackbeard Challenge on some of my favorite sailing grounds.  Paul wrote such a nice description of the race on board Dawn Patrol, a Core Sound 20, that I will post it here with photos of Alan, at top, and Paul, at the bottom.  Thanks Paul and Alan for sharing what reads to be a very exciting race. 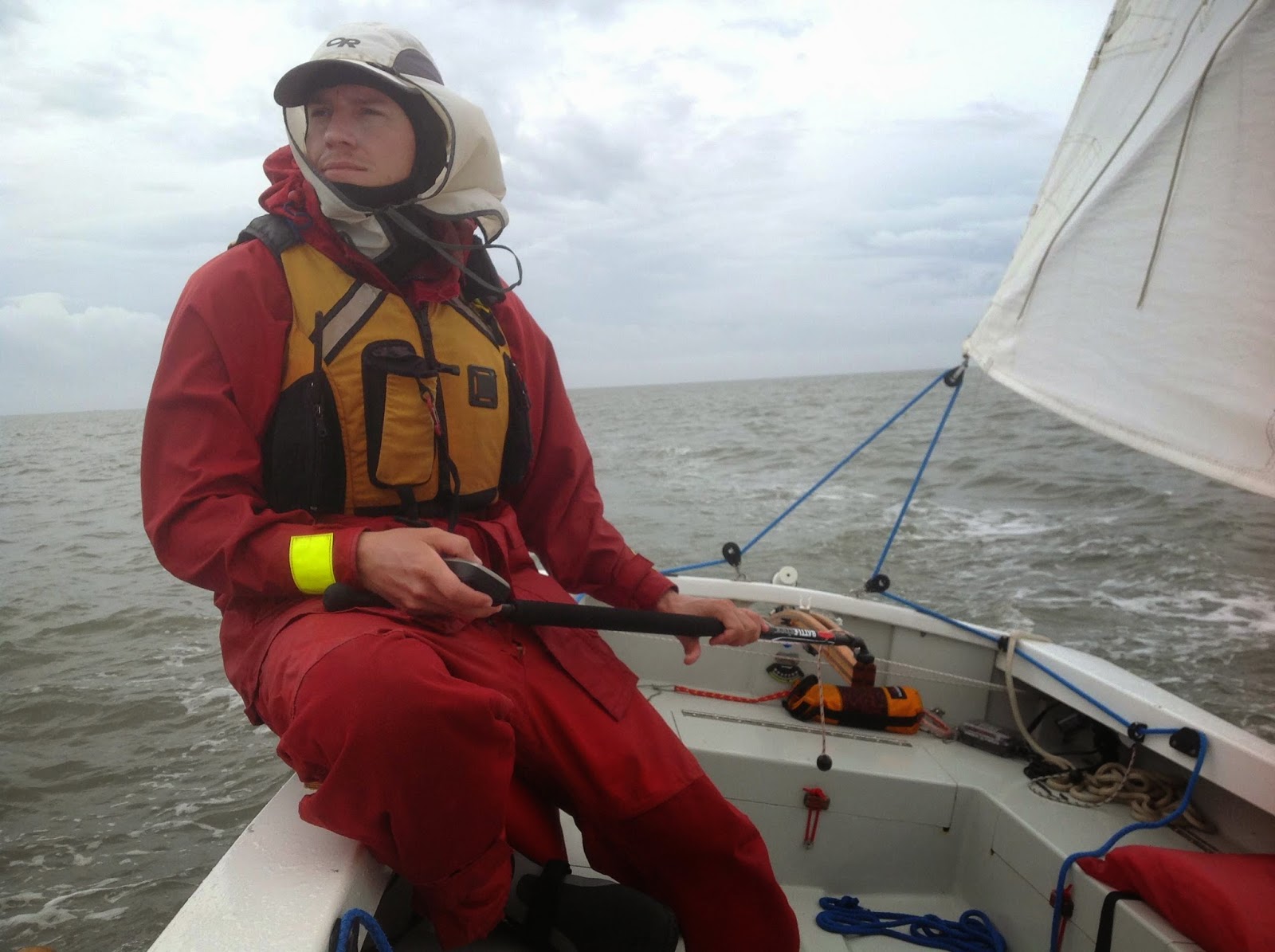 Alan and I finished the WaterTribe's 300 mile 'Blackbeard Challenge' this afternoon (9/24) closing 3.3 days of sailing adventure.  The boat and all the gear worked well.  No damage or injury.  Very high water levels everywhere we went.  (Why is that channel marker pole sooo... short?)    The Pamlico Sound was kind to us  --did not try too hard to kill us on our 47nm crossing.  Eventually the upper Pamlico and the Croatan Sound waves were only 1 foot.  Tacking in the Albemarle to Alligator River Marina in the wee hours was tough but... we caught a fish!  A 10" dinner fish (mullet?) jumped into our boat!  We let him go.  Ran through a pound net before crossing the river mouth. 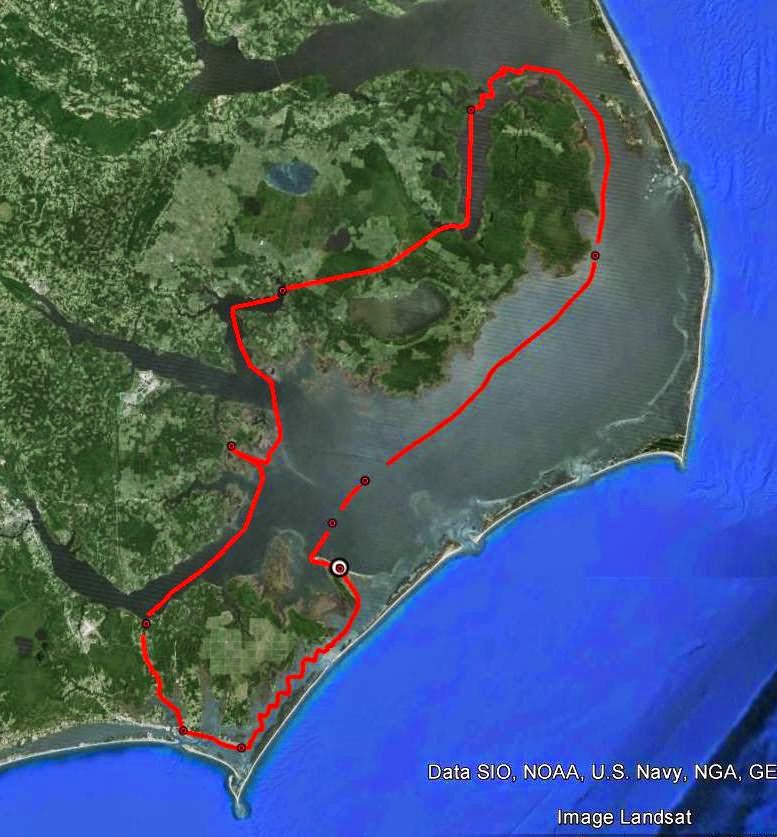 Slept for 2.5 hours and then our autohelm took us down a calm Alligator River while we sipped coffee in early morning light.  Rowed slowly down the Pungo-Alligator canal south. Was that an alligator, or a log?  The log swam away. The last half was a slog rowing.  Night sailing past Belhaven and down the Pungo
River to cross the Pamlico River to Mouse Harbor.  Sped through the bomb-range prohibited area and made it around the corner to Shawn's at Hobucken in the wee hours.  Then we headed down the Neuse for a downwind ride  --but it was blowing 25kts from the NE and the waves were huge  --typically 5-6 feet and sometimes much bigger.  With only the mizzen sail up (and reefed) we fell down the deep troughs in the dark at 9 and 10 kts.  We should not have done it but we underestimated how bad it was out there.  Luckily the Core Sound 20 is the perfect small boat for that surfing run.  The NE wind blew us all the way down Clubfoot Creek to the first bridge.  Squeezed under. 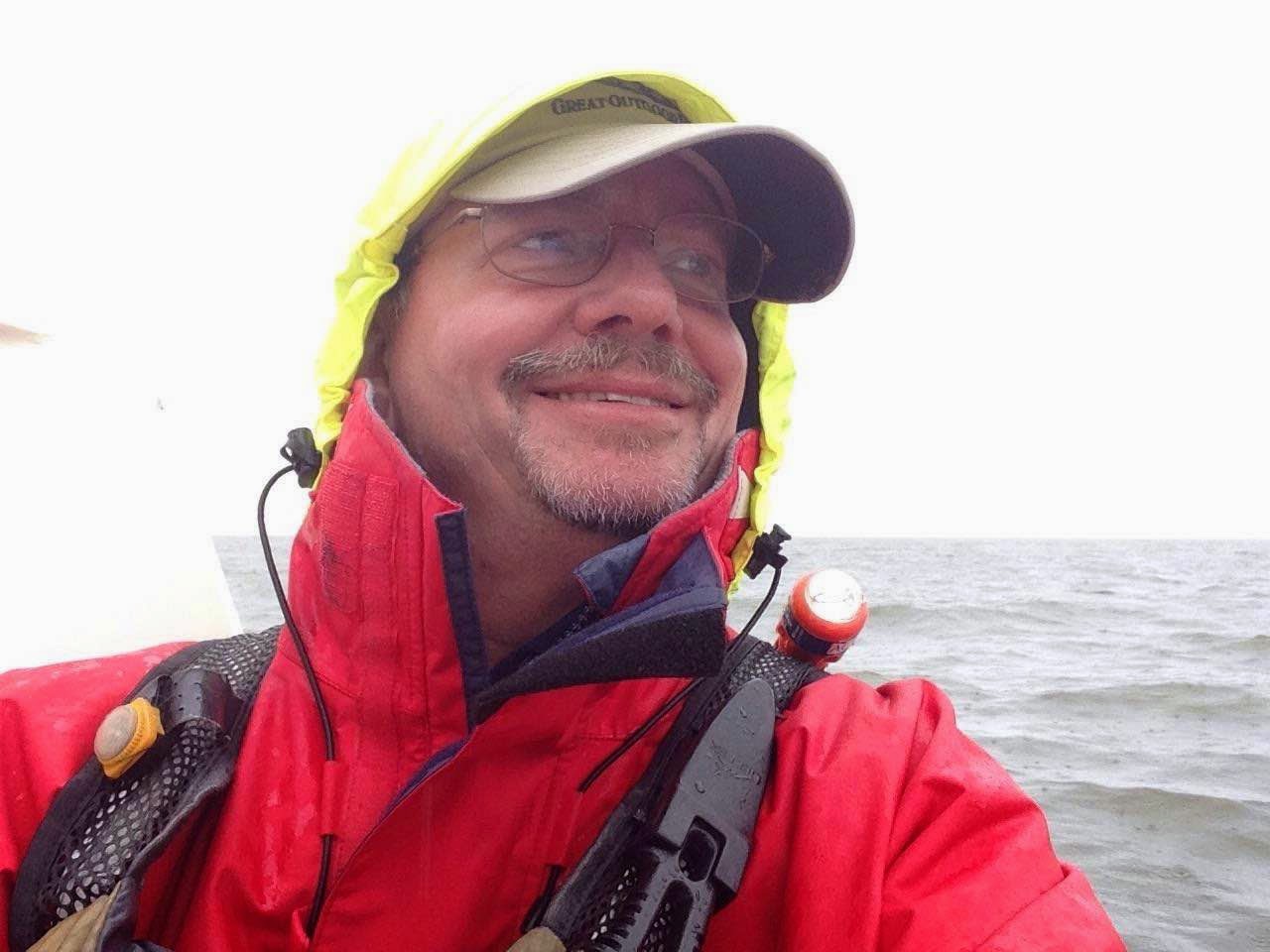 At Beaufort the drawbridge guy was very nice to us.  Did laundry and cheeseburgers while 4 hours at Beaufort Docks.  Generally, not much sleep until we anchored for the night at Shell Point of Harkers Island: slept for 10 hours.  Beating up Core Sound today from 8am to 3pm was actually pleasant in spite of the drizzle
and gray skies.  The high water levels let us take short cuts on Core Sound.  Sailed downwind up Cedar Island Bay to the finish line.  Now it's nice to be in a room at the Driftwood Restaurant/Motel.  Still have that rocking and rolling feeling.