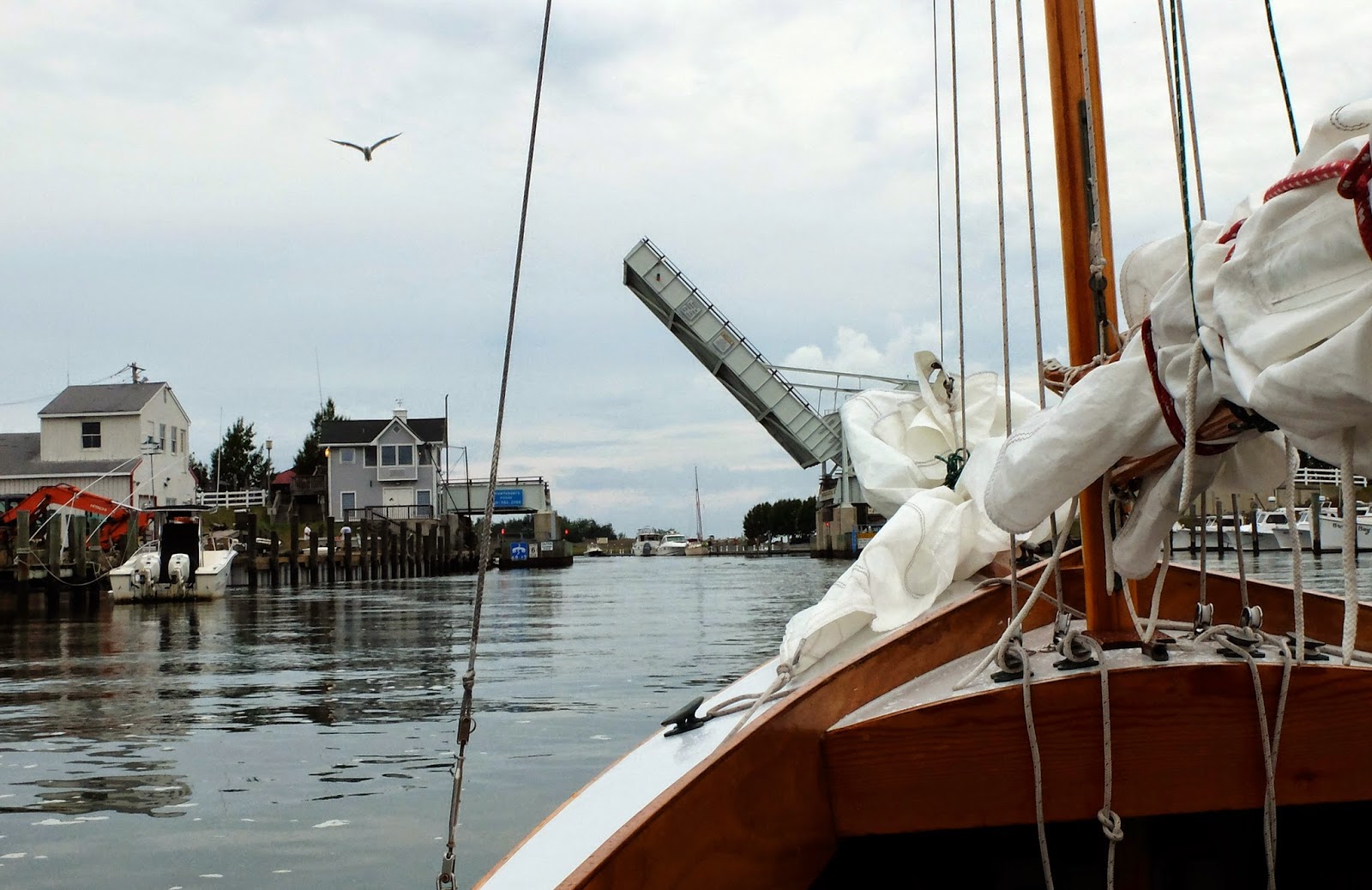 Light rain in the early morning hours.  I climb out of the bivy, close the vents and get back in the sleeping bag.  I'm very happy with the new venting system for the boom tent.

Up at 6:30 to a low overcast.  A misting rain with hints of orange sky to the east.  We sail off anchor just after 7:00 with a north wind that carries us out of the cove and down Harris Creek towards Knapp Narrows.  I see a deadrise heading in the channel and decide to follow as the markers are where I think they should be.  We enter the channel to find it looks different than I had remembered.  There are new homes to port and a little marina.  We follow the curving channel - again, not what I remembered - and see docks up ahead.  Tiller hard over as I realize I followed the deadrise into Dogwood Harbor.

Coming out of the channel I see the marker I had missed - it doesn't have the regular red marker, instead it is a pole with an orange traffic barrel on top.  Soon we are in the correct channel, the bridge up ahead and I call for a lift which happens almost immediately. 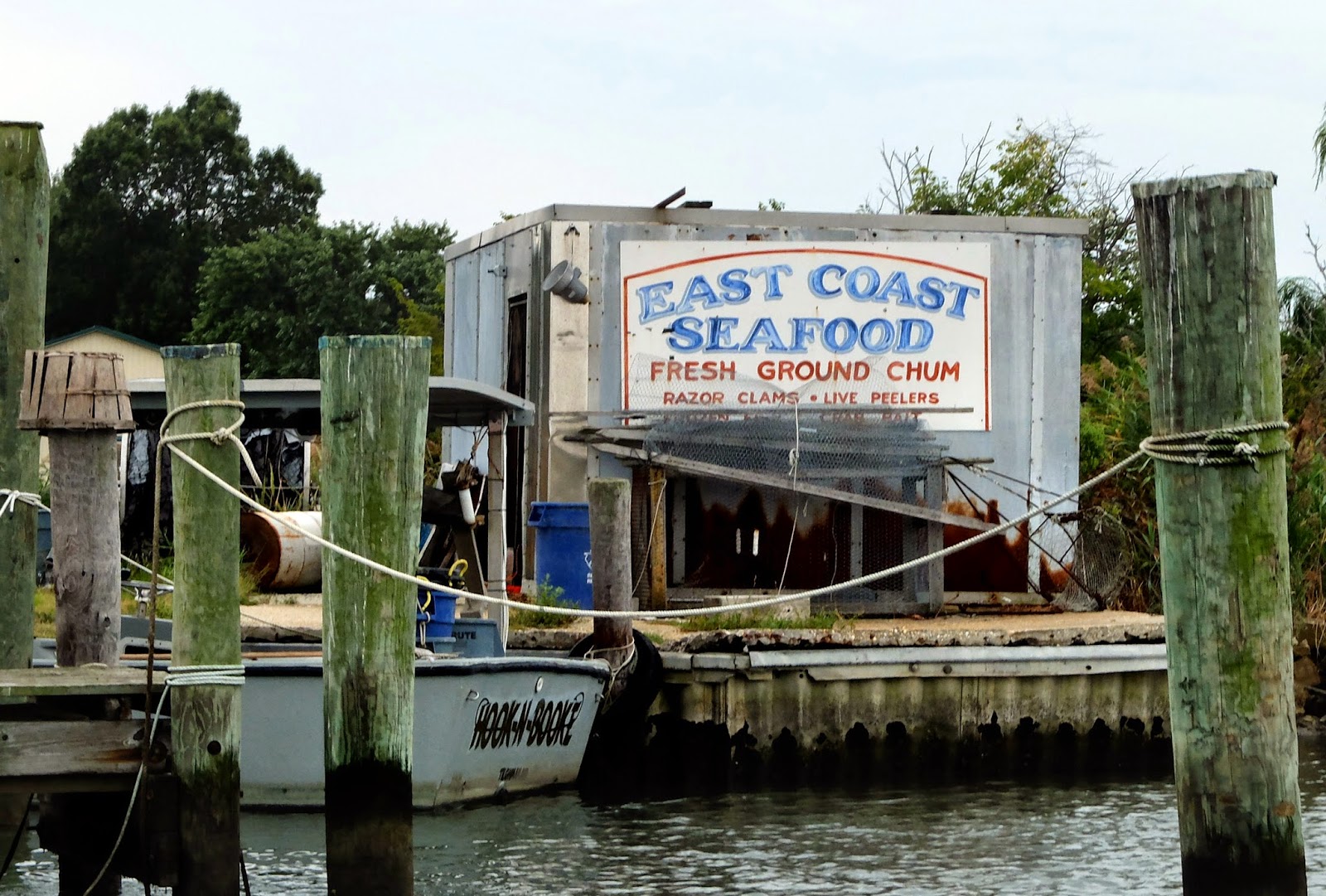 With a  east-northeast wind we are in the lee of Tilghman Island, water calm and making four knots up Poplar Island Narrows.  The wind picks up and the sun tries to break through the overcast.  Light rain comes and goes.  Deadrises are working up ahead. 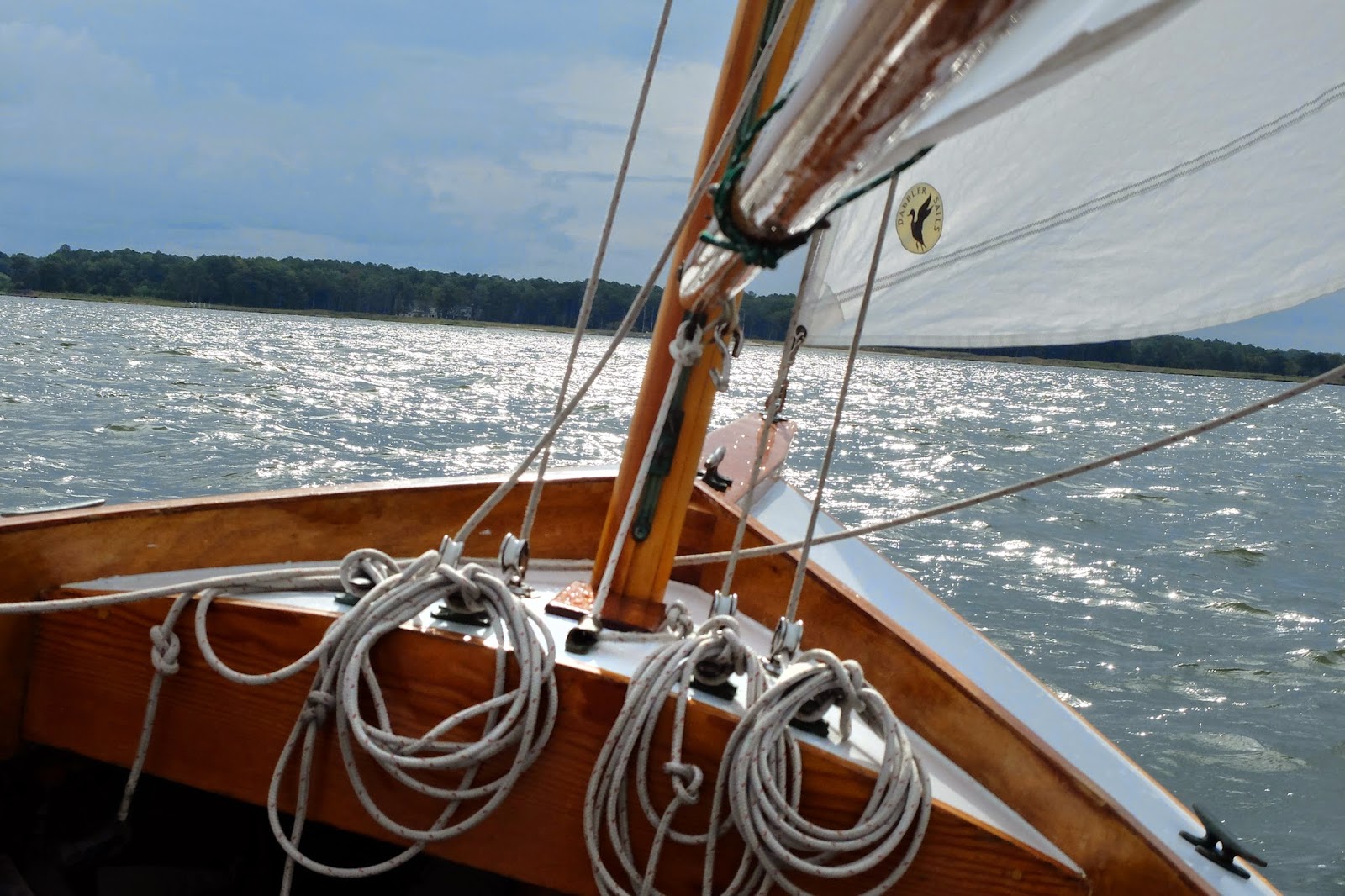 Late morning we begin to the feel the swells running down Eastern Bay as we make a long tack towards Kent Point, the southern tip of Kent Island.  We turn east towards a shallow bay and come into what once once the ferry docks at Claiborne, now a boat ramp and fishing pier.  I tie up for a few minutes to drop off trash and empty the portable head.  A local who had been watching Spartina under sail with a telescope comes down to say hello and look at the boat.  We talk for a while, he invites me over to his house for a cup of tea.  I thank him but say it is time to get back out on the water. 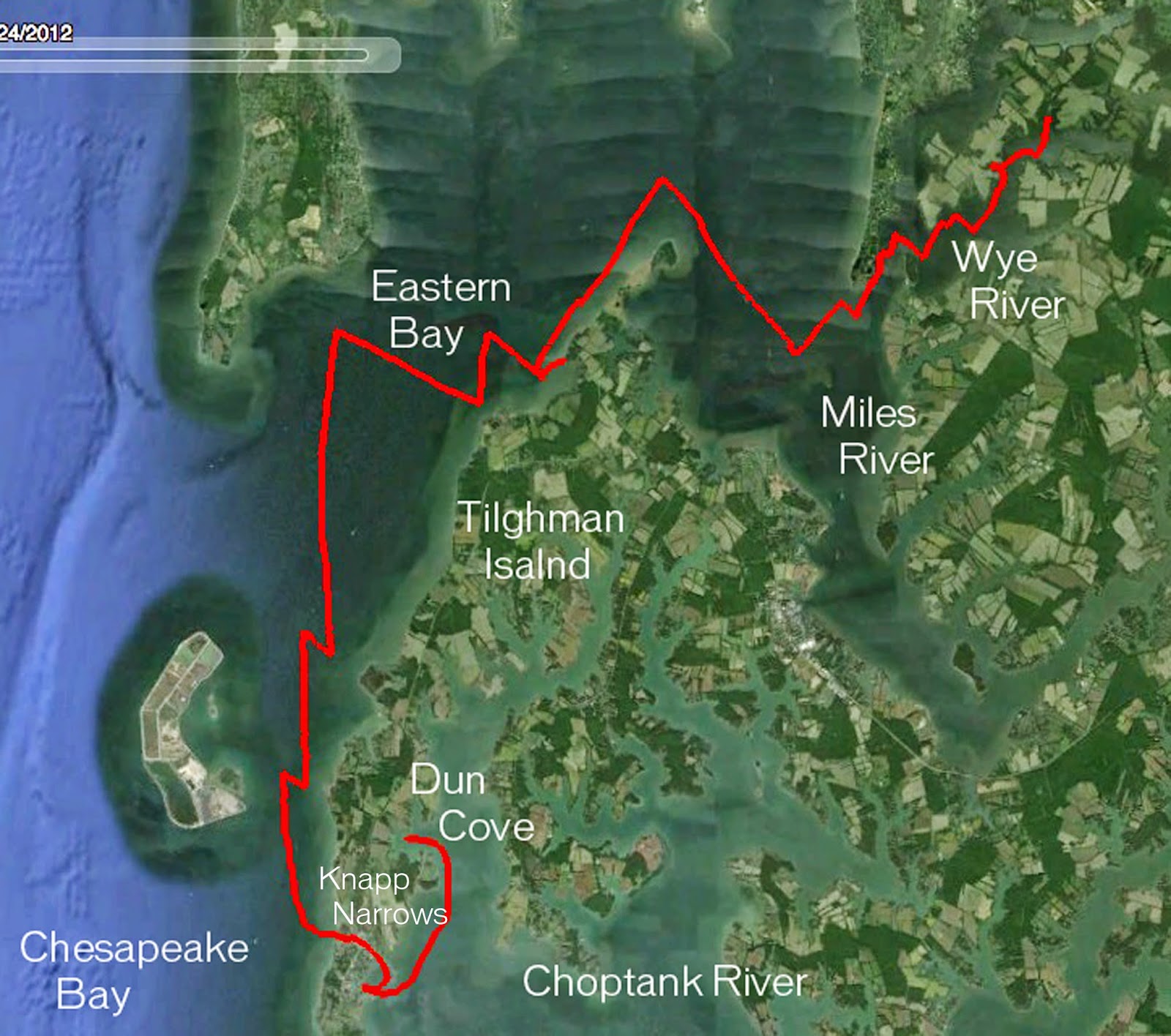 We sail north along Tilghman Island, the wind swinging to the east and getting stronger.  We round up and tie in a reef, still making over five knots with reduced sail.  Ahead is Tilghman Point and I can see the chop coming over the shallows.  A couple of hundred yards past the point the chop is steep and the wind is very strong.  We tack back on forth into the face of the chop, Tilghman Point to our starboard and seemingly getting closer.  I feel like we are not moving at all but the GPS shows we are doing five knots.  I look at the point and trees on shore and see that in fact we are moving, it is just hard going.  The waves have stirred up the shallow bottom and the water is brown. 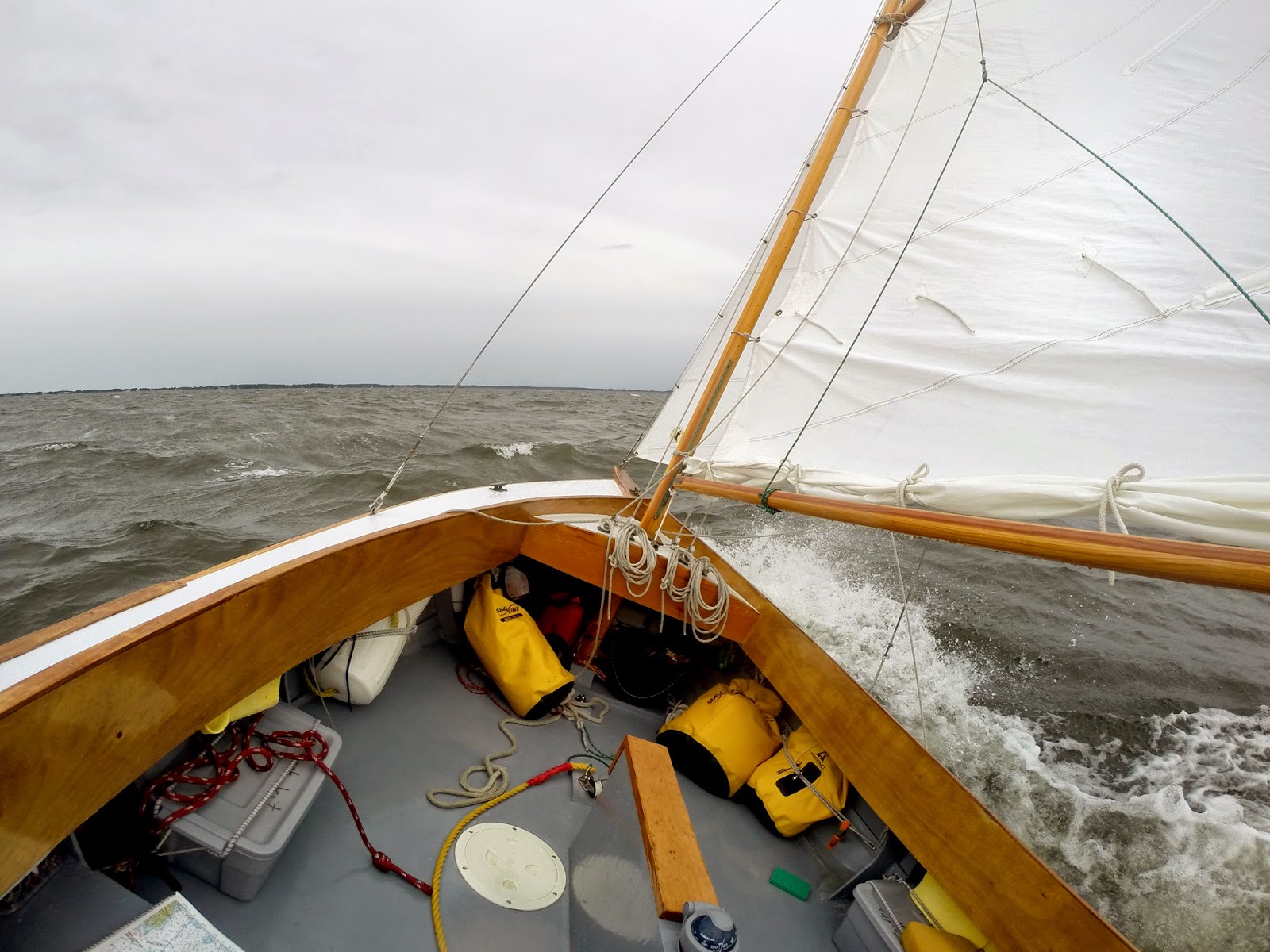 Working our way into the Miles River the water calms.  Without the chop Spartina picks up speed in the still strong wind.  A port tack carries us across the river and I see a sailboat coming out of the Wye River.  We round up to shake out the reef.  Full sail. 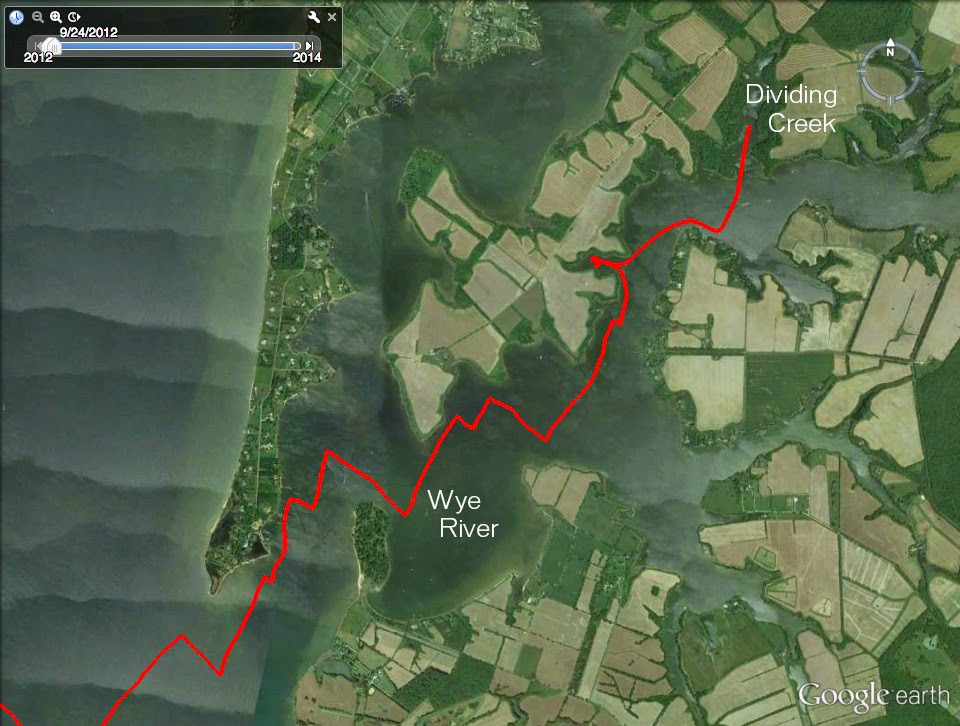 It is perfect sailing on the winding Wye River, strong wind out of the east and pleasant tacking on smooth water.  I've got my GPS next to the chart trying to find Dividing Creek, which has never been easy for me.  I think I see the creek, sail in and drop the anchor just after 3:00.  The east wind comes right into the creek, and looking at the chart I realize an east wind could not come into Dividing Creek, which runs north to south.  My second poor navigation of the day.  Anchor up, we motor around the next big curve of the Wye River and enter the real Dividing Creek.  Two eagles fly overhead. 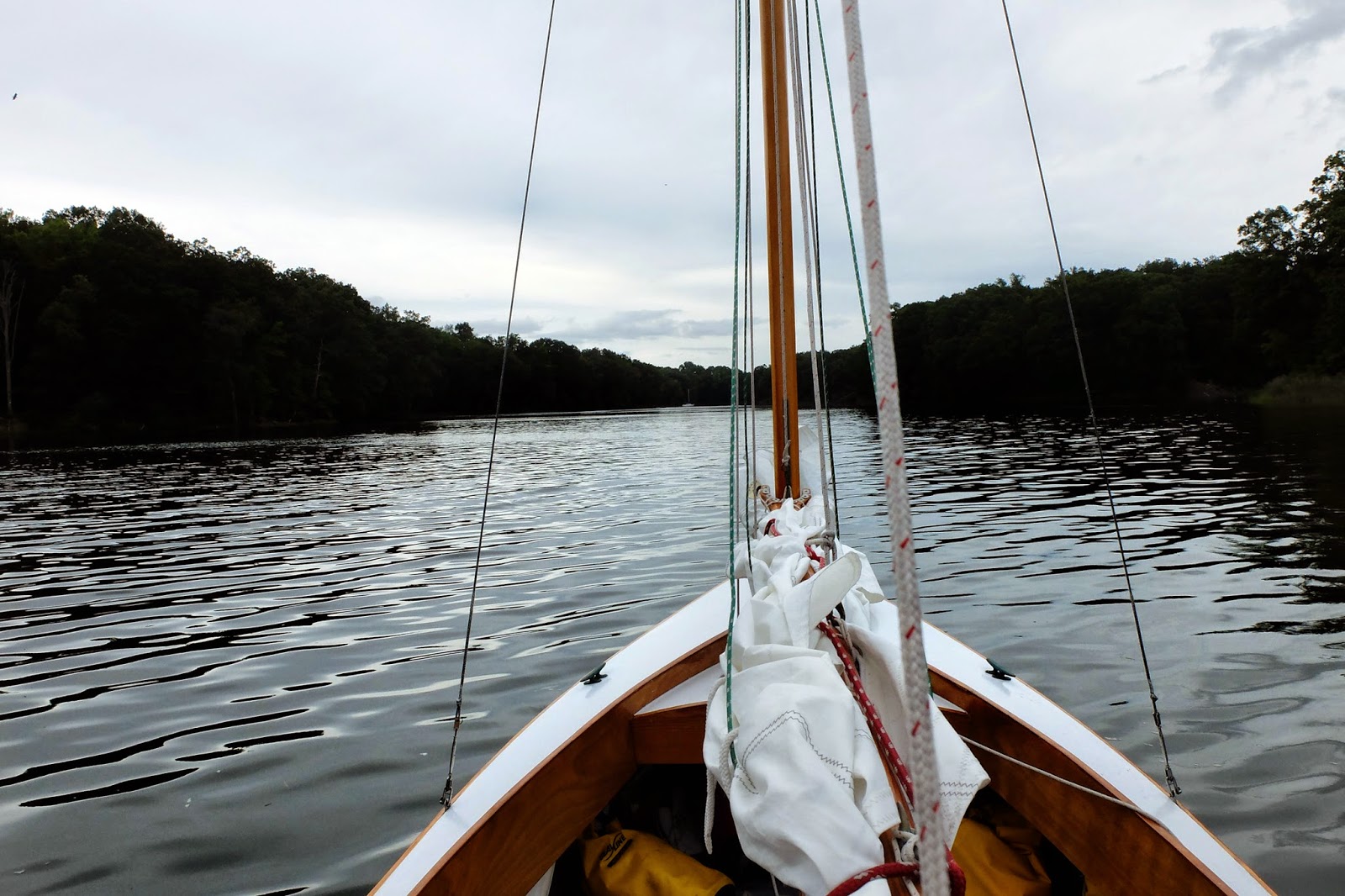 Thanks as always, Steve, for taking us along with you. I like your format of description, track, and pictures, enabling the reader to follow your sail and simultaneously poke around on GE or elsewhere for more detail.

Thanks, I appreciate that. These really are my personal logs of the trips, I do go back and read them now and then. If others find something interesting here, good for us all.