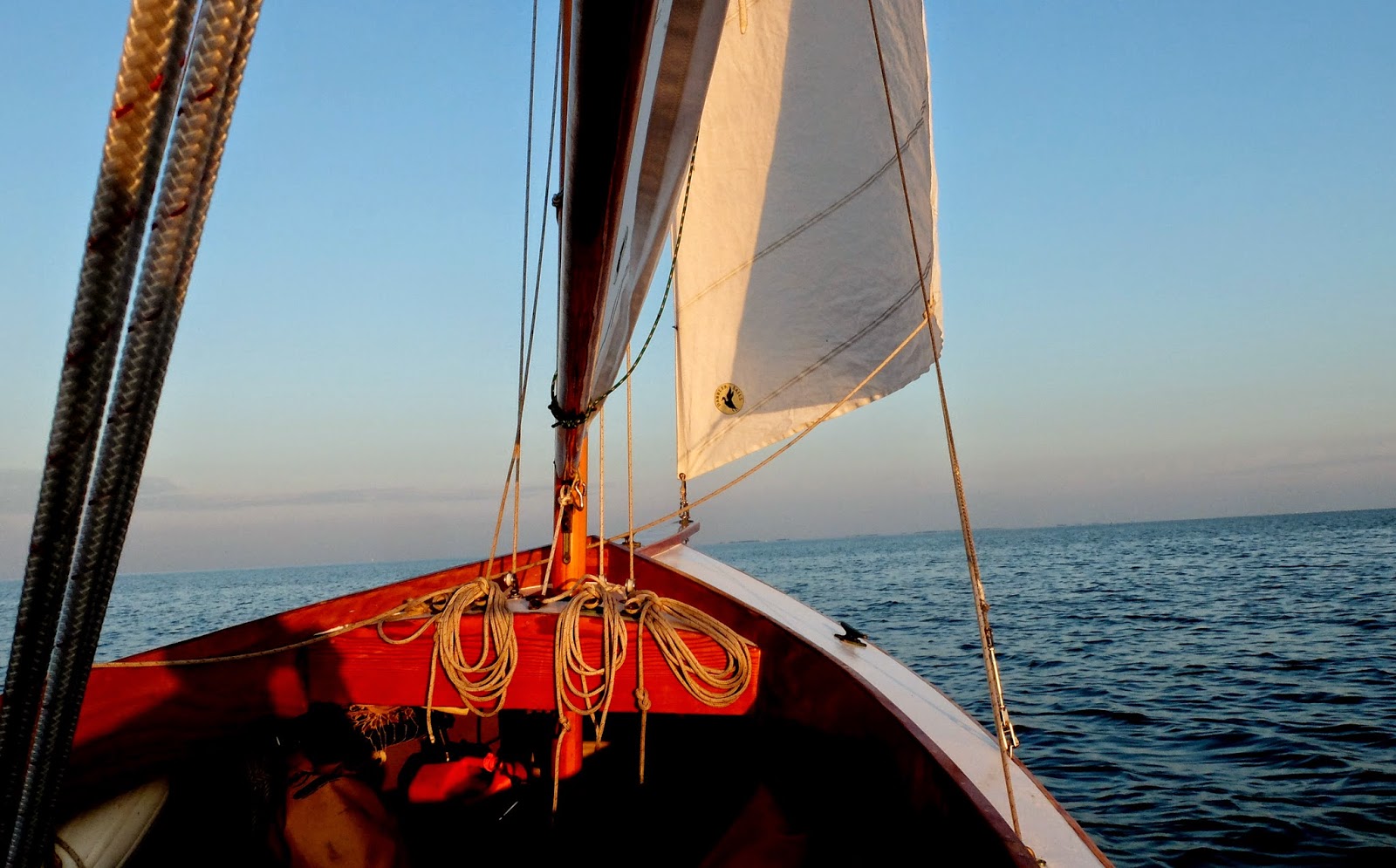 Diesels rumble before dawn and fishermen's voices, sounding harsh over the radios, reach across the water.  Up before sunrise after sleeping under brilliant starts, it is cool and comfortable with a wind out of the SSE.  Dawn finds us moving at two knots into the incoming tide, a swell wrapping around Deal Island up into the river.  We find wind as we move away from shore, 3.5 knots on a perfect morning.  I sit in the shade of the mizzen, steering with my knee on the tiller.  A granola bar and cup of chopped mango in syrup makes for a fine breakfast. 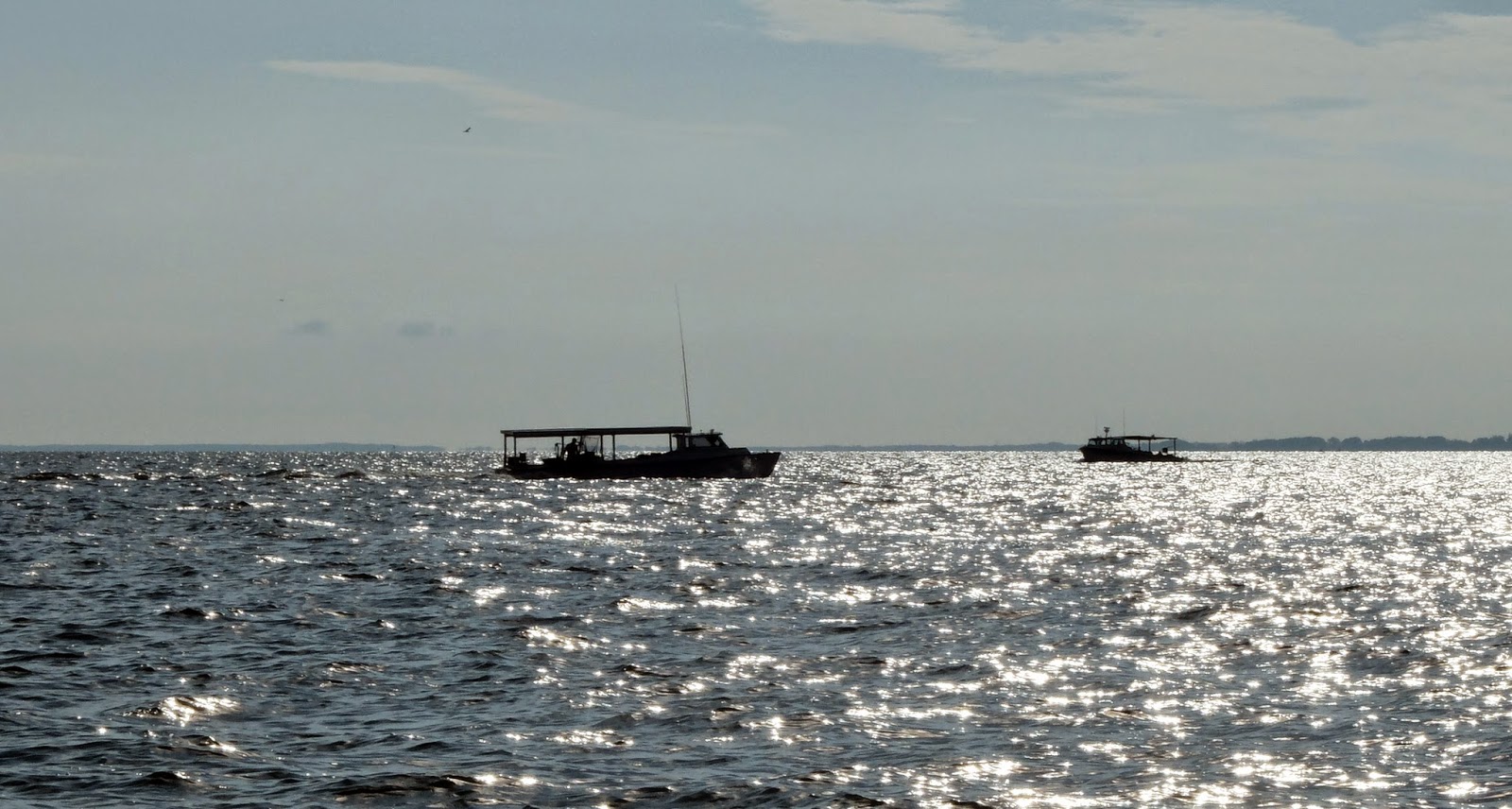 We sail west out of the Wicomico River, the north end of Tangier Sound opening wide with Bloodsworth Island low on the horizon to west southwest and Straddling Point due west.  Ahead in Hooper Strait there are about a half dozen deadrises working trot lines, long lines with floats at either end and bits of bait, often salted eel, spaced out every few feet as as the line lays on the bottom.  The crabbers hook the line and hang it over a metal arm extending from the side of the deadrise, running their boats length of the line.  Crabs hang onto the bait as the line is raised, the metal arm knocking the crabs off the bait into a basket.  The deadrises run in an oval pattern, down one line and then rounding up to run along a parallel trotline, reminding me of a stock car race.

It is hot and humid late morning as we leave Hooper Strait and turn north into the Honga River.  I feel like we are not moving at all but glancing at the GPS we are making about four knots.  The wind picks up, we round up near Bentley Point to tie in a reef. 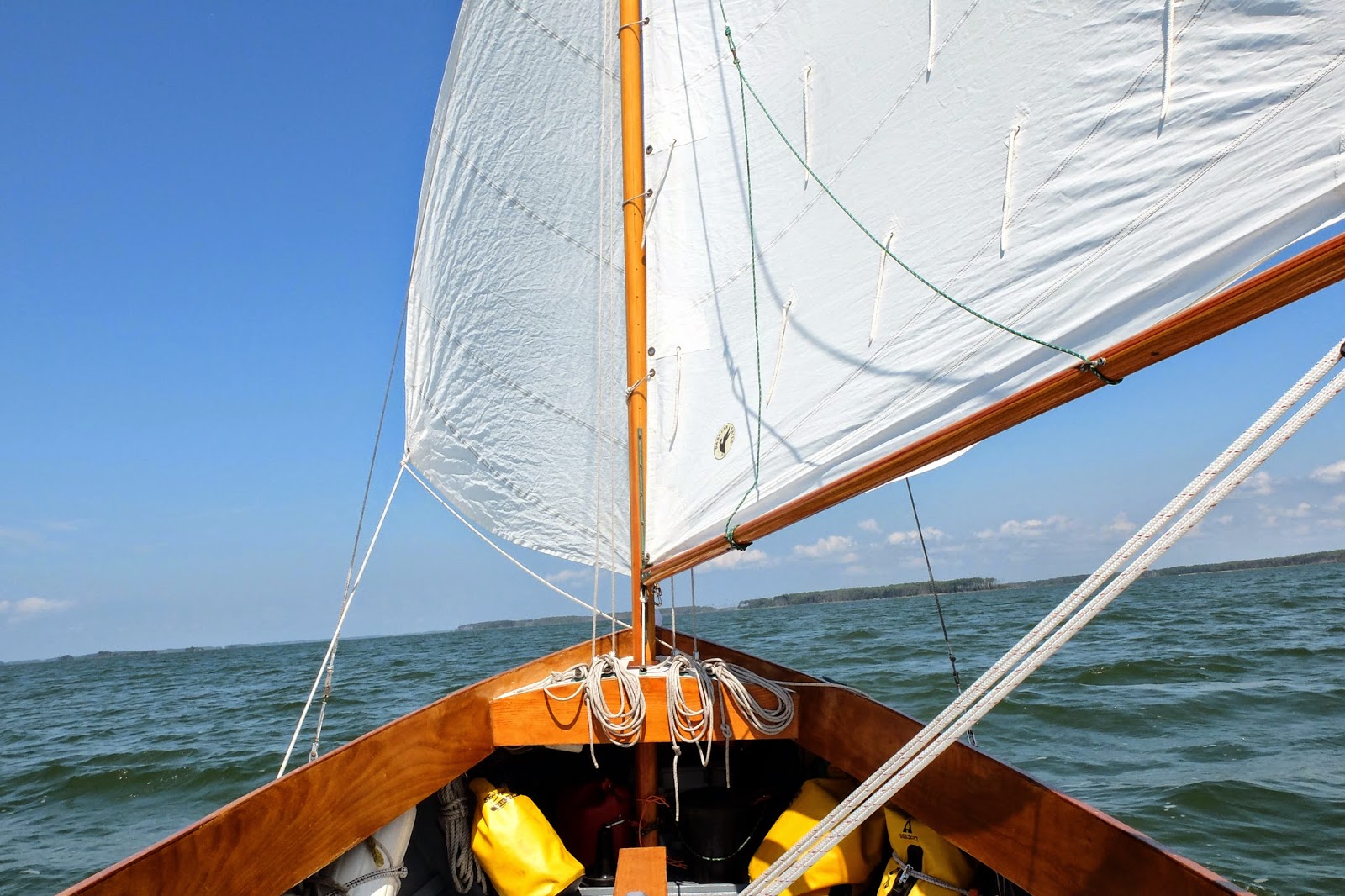 The Honga River is a favorite place on the bay, I've found nothing there but calm water to sail her gentle curves.  Deadrises run up and down the river, headed for crab houses in Hoopersville on Middle Hooper Island or to Back Creek on Upper Hooper Island.  Few other boats are to be seen.  The eastern shore is marshes and trees, eagles and ospreys, a few hunting lodges and not much more. 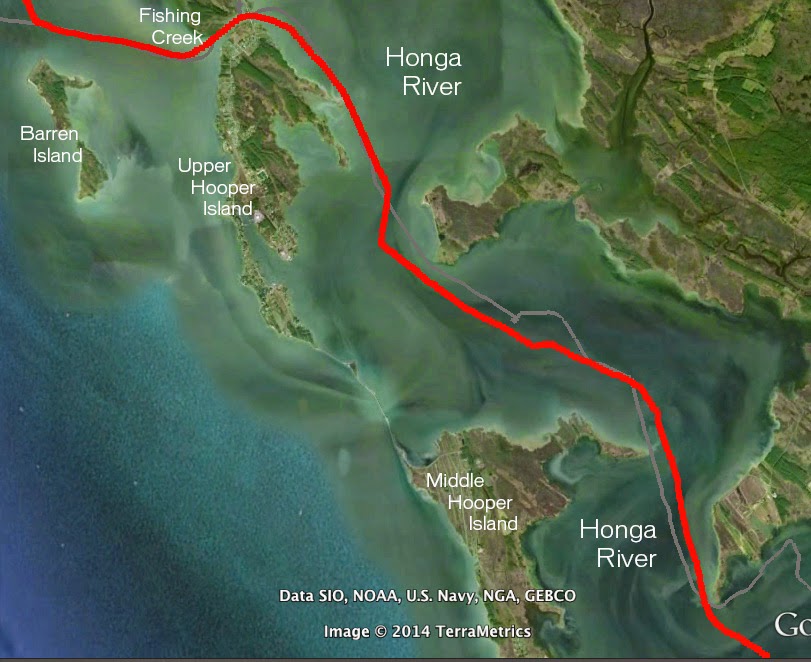 Approaching noon we have to make a decision.  Weather forecast calls for a chance of afternoon thunderstorms, not surprising on the hot humid day.  Leaving the Honga River there is little protection between there and the Little Choptank River several miles up the bay, but it feels much to early to anchor on just the chance of a storm.  Skies are still blue and we have a steady wind, I figure we can make it to the Little Choptank by late afternoon. 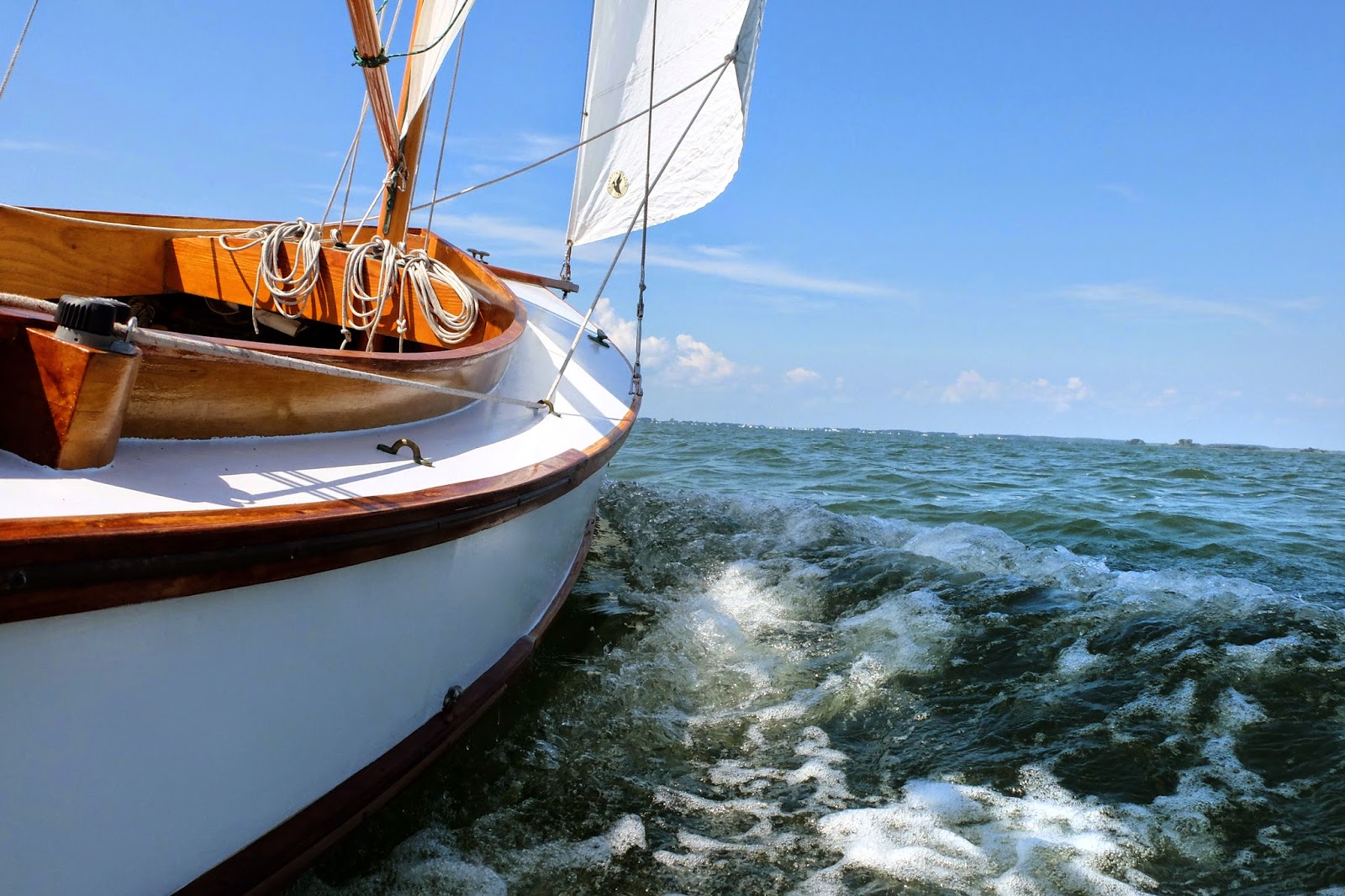 Near the top of the Honga we turn west to Fishing Creek, passing beneath a bridge and into one of the narrowest and constantly shoaling channels I've seen on the bay.  There are markers spaced out along the channel, but sticks are put in place within the channel to show that it is about one-third the width of the marked channel.  The wind is on the beam and we trace the path out to the north end of Barren Island. 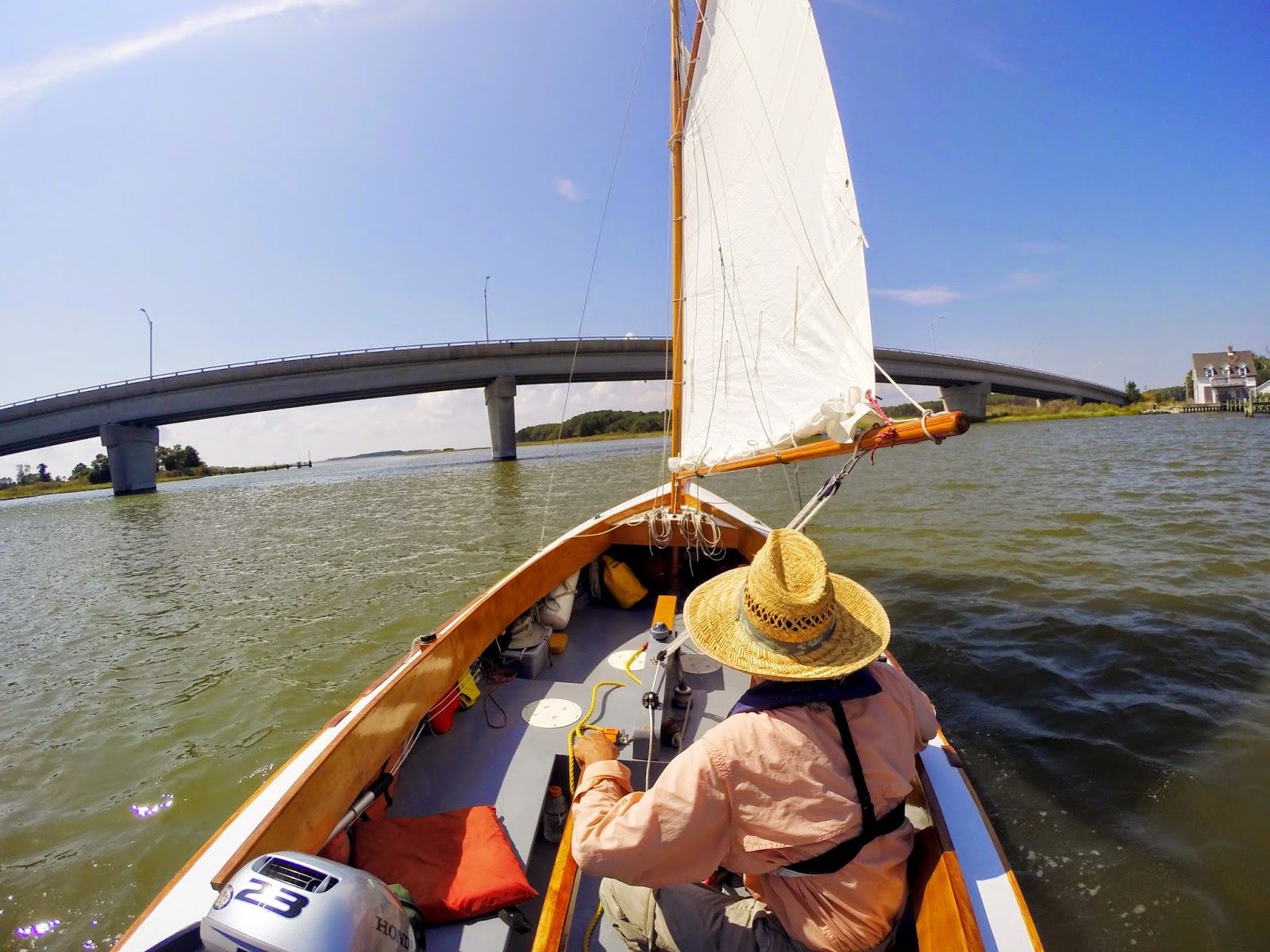 Clear of the shallows and fields of crabs pots we turn north along the The Marshes then skirt the shore, wing and wing, at 5 knots.  Waves rush up under Spartina's stern and once again I bring down the mizzen.  Around 3:00 we pass the only protection on this stretch of the bay, the shallow and winding Punch Island Creek.  Skies are still clear, we continue north. 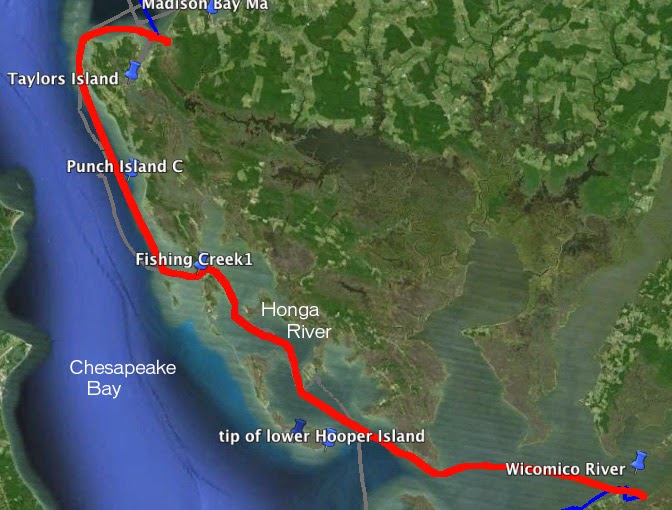 Late afternoon I begin to see eagles flying from the trees along shore, terns diving in the shallows near the beach.  Slipping between Oyster Cove and Janes Island, we raise the mizzen and turn east into the Little Choptank.  A man sits in the shade of a tarp on a 30 foot boat anchored near Cators Cove, watching as Spartina slides by.  I am hot, tired and hungry.  Crackers and cheese satisfy my hunger.  We navigate the shallows and confusing markers at the mouth of Slaughter Creek, centerboard touching the bottom once or twice, dropping anchor at 5:30 in Parsons Cove.

Thunderstorms are forecast for the night.  I put up the boom tent, which it hot at stuffy.  I experiment with folding back the corners at the forward end of the tent, finding that the opening brings a welcome cooling breeze into the cockpit.  Falling asleep in the bivy I wonder what ever happened to the storms. 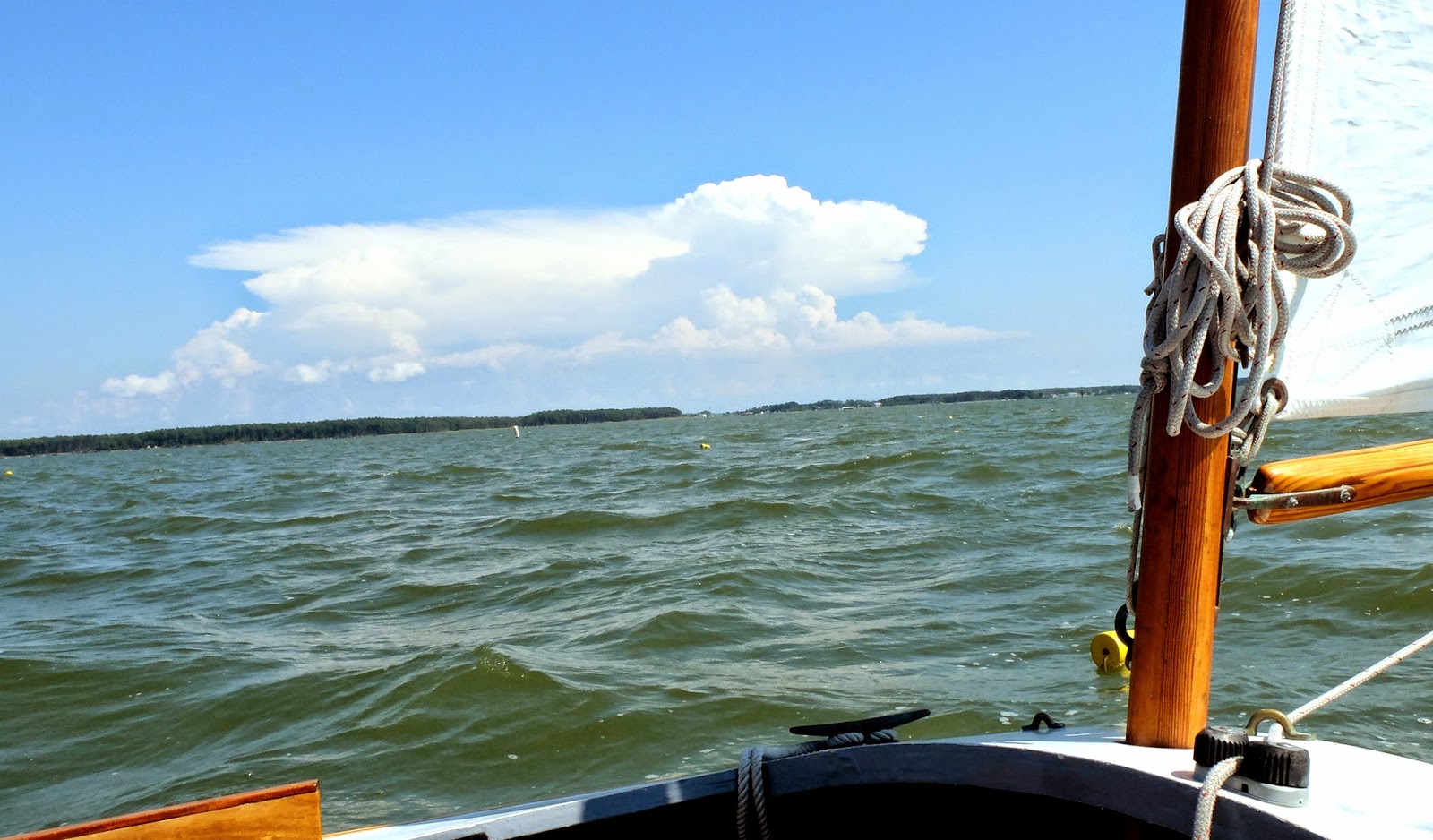 Pure poetry Steve - words and photos and even the path and rhythm of your trip. Starting with the opening between James Is. and Oyster Cove, I think you hit many of our favorite places on the Bay between the Little Choptank and St. Michaels, so many places for which we have fond memories and stories. I'll be looking forward to reading more of yours.

I suspect the weather on the Chesapeake is much the same down here in the Carolina Sounds; it changes on the half-hour. :-)

I just posted a reference link to your Blog on the Precision Forum of TrailerSailor.com website.

A sailor from CA is moving to NC and wanted to know about the experiences on the Albemarle & Pamlico Sounds. I told him to "tune in" to your blog.

Hope it increases the readership from the shoal-keel trailer sailors (like me) who envy your draft and speed.

Thanks, MaryLou and Buck.