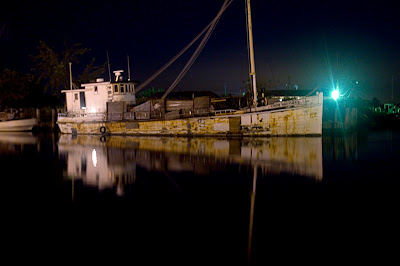 I was up before dawn, I always wake up early on the trips. Snuck out of the room with the camera and walked down to the old working harbor by the Tilghman Island bridge. That looked to me like a "buy boat" above, the kind of boat that ran around the bay and bought the catches of local waterman and carried them to market. There were lights glowing on it but I'm not sure if it was still in use or not. 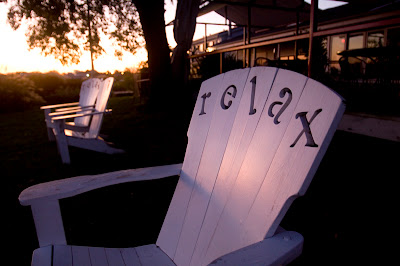 Came back to the Tilghman Island Inn just around sun up and sat out by the narrows to watch the changing light. We were in no rush to leave that morning, breakfast was to be served by the chef at 8:30.

Once the sun was up I headed up to the room where Bruce and I listened to the marine forecast and looked at the charts. In fact we listened to the forecast three different times to make sure we had it right. It was something like wind out of the south 20 to 25 mph, gusts to 30, small craft warnings (again). Our plan was to head north inside Poplar Island then go on to Chesapeake Bay to Price Creek on the west side of Kent Island. I didn't know what wind like that would do on the open bay. How rough would the water be? So we decided to keep Price Creek as a goal but if the water seemed too rough once we moved out from behind Poplar Island we would head to (what we hoped would be the better protected) east side of Kent Island. 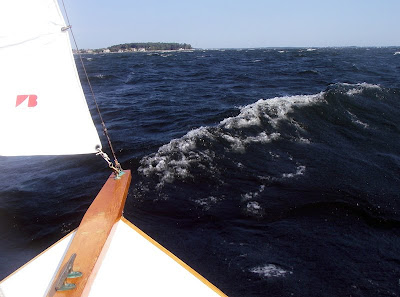 The water was very rough. Heading out of Tilghman Island we had to motor down the channel directly into the wind and waves. The bow was pounding up and down, the outboard was whining as it came out of the water going down the face of the waves. I did not have the jib tied down tight enough, the wind pulled the top few feet of it up the forestay. The wind on that little bit of sail wanted to pull the boat NW out of the channel and across the shallows. It took a few minutes to finally get out of the channel where I cut the power and we raised the jib. That was all we needed. We were racing north over the swells.

It took no time at all to realize we ought to head to the east side of Kent Island. As rough as it was behind Poplar Island I can't imagine what it was like outside. We angled east of Bloody Point, the southern tip of Kent Island and entered Eastern Bay. The wind and the waves still kept coming. Spartina behaved like a champ, surfing down the face of waves again and again. The tumble home on the aft end of the hull kept us dry and the narrow forefoot cut through the chop as we slid down the face of the waves at 6.5 to 7.4 knots. I raised the centerboard and just let the jib pull us along. I started looking at my chartbook for a protected anchorage while Bruce searched his gps up forward. (My search was made more complicated by the fact that the split in the pages of my waterproof chartbook cut right along the backside of Kent Island. ) We decided on Cox Creek and Bruce guided us in to red marker "2CC" at the mouth of the creek. 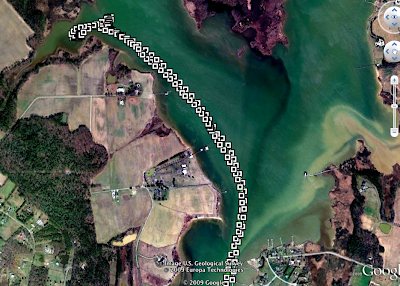 The lower part of Cox Creek ran north/south for over two miles so we still had the wind and the waves with us as we flew up the creek still under jib alone. The creek then swung to the NW for a while before it reached Warehouse Creek - a beautiful tree lined, well protected anchorage where we dropped the anchor at 12:40. We raised the anchor moments later as a waterman showed us - very politely - that we had anchored over a crab trotline he was working. We used the outboard to move about 100 yards to the southwest - an even better protected area. Nothing but trees and marshlands could be seen from that peaceful spot on Warehouse Creek.
It is interesting to me that all summer long while researching this trip I had never look at Warehouse Creek, Cox Creek or even the east side of Kent Islands. Sometimes it is the unplanned events that work out the best.

With the wind and the waves still howling out on Eastern Bay we knew we weren't going anywhere for a while. So we broke out the stove and fixed lunch.