After our day off in Rock Hall we carried our gear in the darkness back to Spartina at the marina. It was cool ( so cool that we slipped on our foul weather gear for warmth) and clear. Stiff breeze out of the north, perfect for our southbound trip. We motored away from the dock a little after 7:00, Roxy (or was it Roxanne??), who we had met on our arrival, wished us a safe journey as we passed behind the Catalina that she and her husband weekend on. 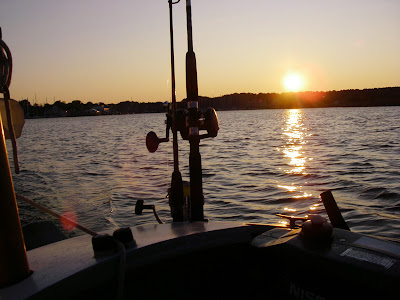 We navigated out the harbor (Rock Hall Harbor is fairly shallow but has well marked channels) and set mizzen and jib. The wind was still pretty stiff and we headed south in one to two foot chop at 4 to 4.6 knots.

That says something about the wind on this trip - we had been sailing for six days and this was only the second time we had been under full sail. We were in the Kent Narrows by 9:45 headed southbound for the bridge. We passed Harris Crab House, above, where we had been served great crab cakes a couple of days earlier. We still had about 15 minutes before the bridge opened so we circled around under power in the channel.
I learned a bit about bridge etiquette that morning. A northbound sailboat had put in the first request for a lift, I called the bridge tender with a request for the same 10 a.m. opening a few minutes later. When the bridge started to open I contacted the bridge tender on my vhf radio and asked if I should let the north bound vessel go through first. He said no, I was the south bound vessel and the current was running south at that time. The boat going with the current has the right of way in this situation. So we passed through first, giving a wave of thanks to the tender looking out from his small window above. 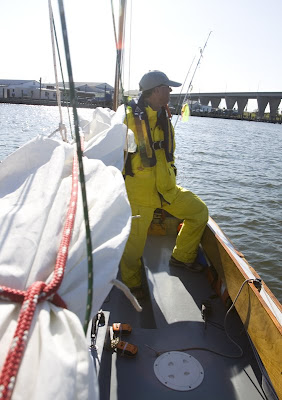 We continued south under full sail, a sunny warmish day, passing through the narrows into Prospect Bay and eventually entered Eastern Bay. It was very pleasant out there on the calm blue water (about time!). 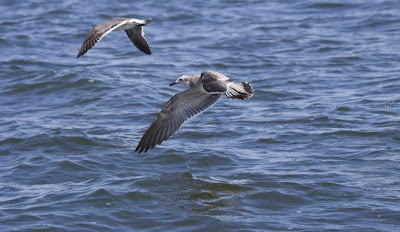 Half way across Eastern Bay we saw gulls and terns diving for the surface. I pushed the tiller over and grabbed the fishing rod. Those gulls were feeding on bait fish that were chased to the surface by schools of hungry blue fish and rockfish. Our gps track shows us chasing the school around as they popped up to the surface, disappeared and popped up again and again over the next twenty minutes. The first couple of fish I caught were too small and I threw them back. 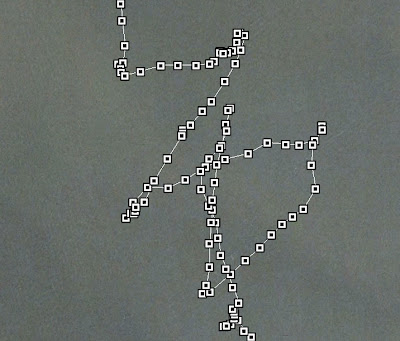 But then we got a tug on the lure we were trolling behind the boat. It was a nice taylor blue. (In blue fish terminology "taylor" blues are the smaller ones, maybe 24 inches or less, and usually the best tasting. "Chopper" blues are bigger than that - up in to the 36 inch range, they put up a great fight. But my experience is the chopper blues tend to be oily and are best eaten only when smoked and made into a blue fish pate with cream cheese, horse radish and a few other ingredients.) 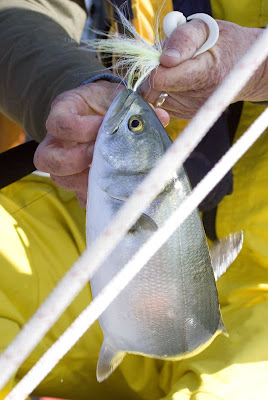 By this time Bruce had taken the tiller while I cast away. The school disappeared for a while, then popped up again where he put me in the perfect position to cast and catch a nice 22 inch rock fish.

Fresh seafood was quickly added to the menu for that night.