the marshes of Punch Island Creek


By early afternoon we were dodging fish traps off of the Big Broad marshes. We began searching the shore looking for newly installed jetties that would help us find Punch Island Creek. Bruce's Blue Water Charts gave us accurate depth readings and we paralleled the coast just outside of the five foot depth line.


It took a while before we eventually spotted the jetties and tacked back in toward the creek entrance. Just at the entrance, south of the jetties we dropped the jib and the main and motored into the shallow creek.

The first two possible anchorages - located in the marshes to the north and south of Punch Island Creek - looked too shallow. Up ahead on a dock we spotted some of the locals working on their duck blinds for the fall hunting season. We motored over to the dock and asked where we might anchor. 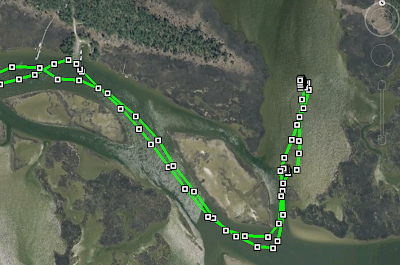 They said we were correct in that the first two marshes were too shallow. But if we continued up Punch Island Creek to the next duck blind we would find Robinson Creek (also marked Robinson Cove on some charts) to the north. We followed their instruction and there it was. After making our way through a narrow, shallow entrance we found deep water with plenty of room for Spartina to swing on her anchor. (It was a very shallow entrance. If you look close at the track you'll see we hung up on a shoal and had to raise the cb and rudder to get inside.) 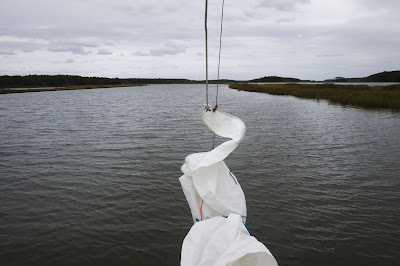 The trip up the creek, one where that few sailboats would visit, was beautiful.  That's the great thing about a small sailboat with a very shallow draft - it will take you places where most boats can't go.

Anchored in Robinson Creek we quickly set up the bivy's and boom tent, a forecast inch of rain was on its way. Instead of using the stove we broke out the heater meals, self-heating dinners that we carry on each cruise. Under the boom tent we filled out the daily log and got ready for a rainy night.

I trust you know how very much we are enjoying reading these posts! What a treat!
--Paul

I second that! Amazing blog, great pictures and a terrific story!
Bill

Thanks guys. The trip was a lot of fun and I enjoy reliving it. Glad you find it worth reading. Bruce should be chiming in with his view soon.