I received some photos of Spartina from friends we met on the trip. These are the first good quality photos I've seen of the boat under sail. My view has always been from the cockpit. It is nice to finally see what she looks like with a nice breeze. 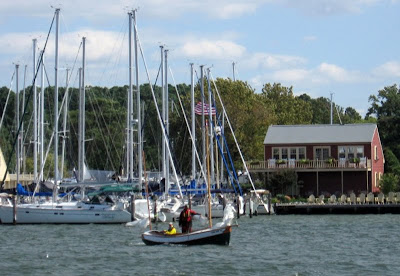 Mary Lou took the photo above as we entered the harbor at Rock Hall, our northern-most point, on a very windy day. I'm in the yellow foul weather gear, Bruce is up forward. Mary Lou and her husband Fred later showed us a wind chart for the day that reported sustained winds of 27 mph and gusts over 30. You can see the flag beyond all the tall masts standing out straight in the wind. That was quite a ride. It felt good to be in the harbor with the dock in sight.
In addition to the photo Mary Lou sent the web site with weather archives so we can look at the data. Wind speed for me has always been a guessing game. Now we'll be able to look back and get a more accurate picture of the wind. Thanks very much Mary Lou. 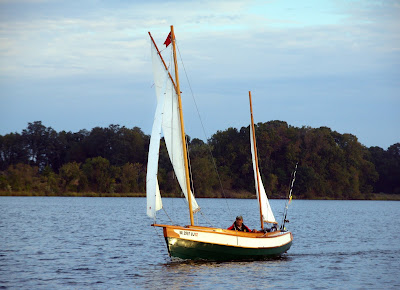 And Kevin B, owner of the Navigator Slip Jig, sent these photos of Spartina on the Wye River on the last day of the cruise. I don't know where I am in the photo above, maybe ducking down to pick up a piece of gear or something. But I was there somewhere. And below is a nice transom view of the Pathfinder. I've got to say I really like the way she looks out on the water (now that I have finally gotten to see her under sail). 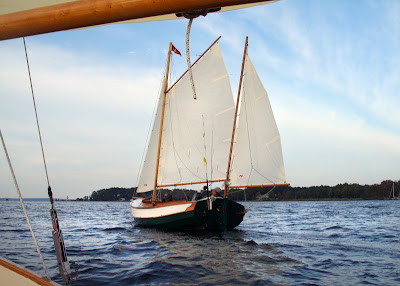 Thanks guys for the photos. I'll start organizing our photos tonight but I'm sure it will be a few days before I can post them.
steve
Posted by Steve at 8:51 PM