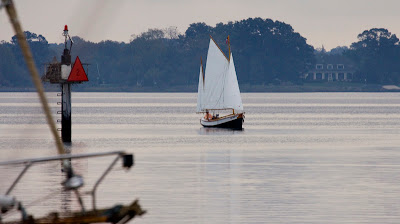 We are back safe and sound. Had a great trip. Just wanted to post a quick note to say thanks to the folks that followed the trip. We appreciate your interest. Above is Spartina on the Miles River off of St. Michael's, our final port. 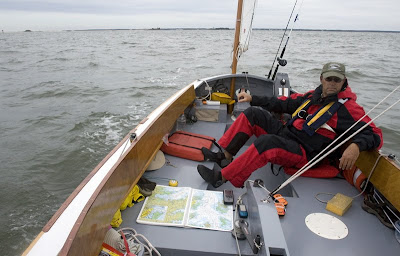 Over seven days we covered 136 nautical miles with a moving average of 3.7 knots (pretty good considering our goal on a typical trip is 3.0 knots). The wind always seemed to be in our favor. When we headed north the wind was out of the south or southwest. When we went south the wind was out of the north. It seemed like every mile sailed was a mile made good.
We visited Smith Island, Punch Island Creek, Tilghman Island, Kent Island, Rock Hall, the Wye and St. Michaels - a pretty nice way to see Chesapeake Bay.
That is Bruce, above, at the tiller crossing Tangier Sound on our way to Smith Island. We were sailing under mizzen, jib and double reefed main. The wind was so strong this trip we spent a lot of time with shortened sails. We sailed with a reefed main, under mizzen and jib only and under jib only one day (doing 7.4 knots surfing down the waves). It was all a great ride. That is Steve above motoring to a different berth behind Ruke's (a great restaurant) on Smith Island. We really enjoyed sailing through the narrow channels on Smith Island. Narrow, sweeping channels through the marsh grass with a nice breeze and calm water. ( We had sailed up the Big Thorofare earlier, at this point we were just moving from one dock in Ewell to another.) 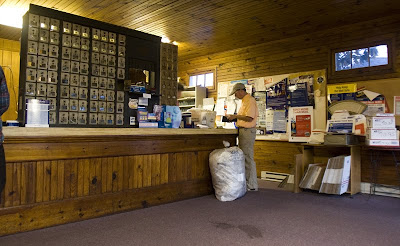 Steve stopped at the post office just after 6 a.m. on Smith Island to send a post card to his daughter at college (she later told him she never got it because she doesn't check her mail box at school! So much for snail mail.) 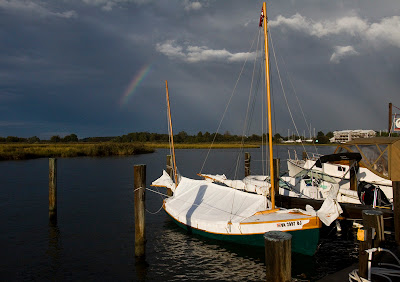 A rainbow hovered over Spartina in the evening at Tilghman Island, our third night on the trip. The night before we were anchored in a marsh off of Punch Island Creek while an inch of rain fell. We stayed dry in the bivy's under the boom tent. 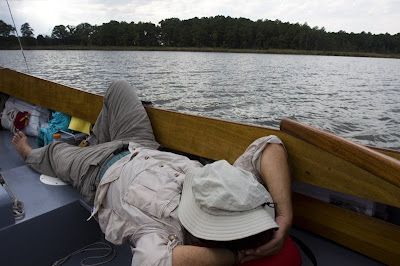 After a great downwind run to Kent Island under just the jib we anchor in tiny, protected Warehouse Creek. We never planned to stay there, never even looked at it on the charts while planning all summer long. But it was the perfect spot to spend a great fall afternoon and evening relaxing and listening to Monday night football. 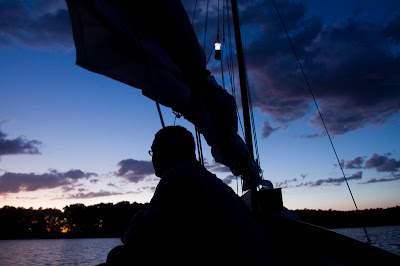 The sunset at Warehouse Creek was spectacular. 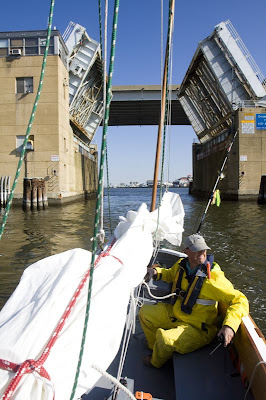 That is Steve at the tiller passing southbound through Kent Narrows. 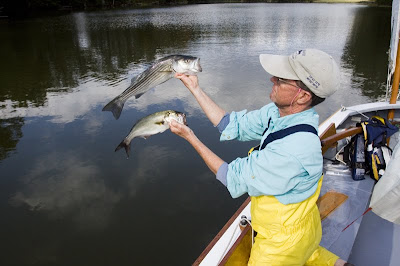 And what do you know? We got lucky and caught a nice rockfish (top) and bluefish on East Bay. We had some still frozen sirloin in the cooler so it was surf and turf for dinner that night. 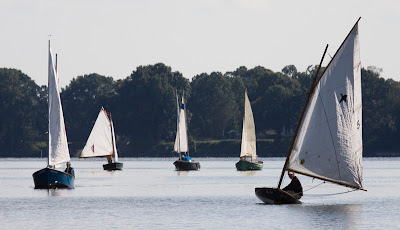 We met the gunkholing fleet from the Mid-Atlantic Small Craft Festival on Dividing Creek on the Wye River. Great boats, great people and a great night of camping. 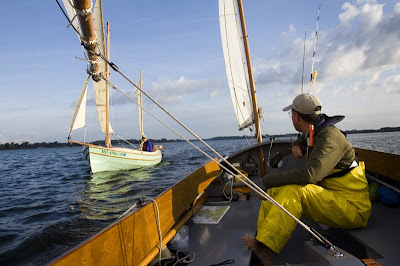 And there we are sailing with Kevin on board Slip Jig headed for St. Michaels and the festival. Both Spartina (a Pathfinder) and Slip Jig (a Navigator) are from the drawing board of John Welsford. It was great to sail along with another one of John's designs. On this trip the Pathfinder once again proved to be a wonderful cruising boat in some pretty blustery sailing conditions.
It was a great trip. Lots of fun, lots of adventure. We'll regroup, sort through the photos and start posting a daily log soon. Thanks again to all for following the blog, and special thanks to Kevin, Mary Lou and Fred, Seth and Barbara, Jim and Jim, Doug, Thomas, Dale and the good folks at the Chesapeake Bay Maritime Museum. It was good to see some old friends and make some new ones.
steve and bruce
Posted by Steve at 8:00 PM

Holy cow, I can't believe you guys are back already! Glad to hear you made it safely. And thanks Steve for the ride and good company in St. Michael's. I'm returning to building newly inspired.

I really enjoy your blog. your photography is first rate and I really like your boat. Its high on my list of designs. I sail a Sea Pearl now and I am very interested in attending the Mid-Atlantic Small Craft Festival next year. did you take more pictures?

Yes, we shot a lot more photographs (I think the count was over 1500 so there might be a good one or two in there). We'll be publishing some of them with a daily log, but that won't start for a week or so as we've got to catch up on family, work and that sort of thing. steve