It was a really great night on Warehouse Creek. A cool front had moved in on the previous afternoon and it was the clearest, coolest night ever on the boat. No need for the bug screens on the bivy's. I would wake up now and then, enjoy the stars above and curl back up in my sleeping bag. Just fantastic. 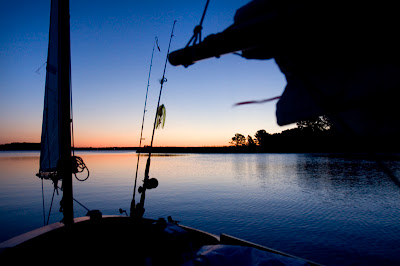 The next morning the wind, still strong, had swung to the southwest. We still had small craft warnings, in fact we had had four days of small craft warnings in five days of sailing. We raised mizzen, jib and double reefed main for the reach down Cox Creek out towards Eastern Bay. That is the mouth of Cox Creek Below. 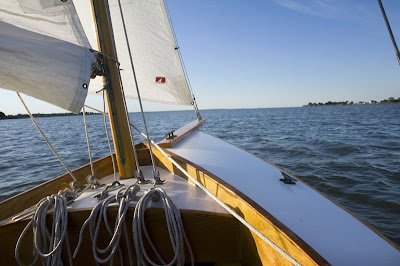 We used Bruce's gps, with the great charts that showed all the shoal depths, to sail east past the remants of Long Marsh and Bodkin Islands (and their shoal areas which were once part of the islands) and then on past Parsons Island (with a beautiful-looking farm on it) in a pretty stiff breeze. On the open water we dropped the double reefed main and sailed under mizzen and jib doing a respectable 4+ knots. The swells were still up on Eastern Bay and we spent some time trying to photograph them without much success. Below is the closest we got to a good picture, but it really doesn't convey the size, force and thrill of riding down the front of the wave. You'll just have to take our word for it. It was a great ride 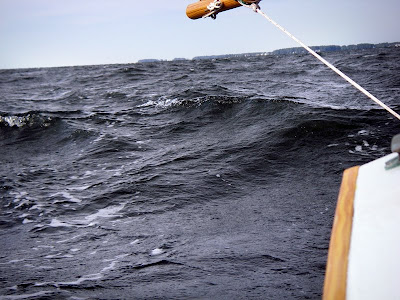 By 9:45 we could see the bridge at Kent Narrows. I had been sweating the currents in area for a long time but with some wonderful advice from our friend Mary Lou we timed it to be running north with a moderate north-bound current. Another sailboat was ahead of us and requested a lift. 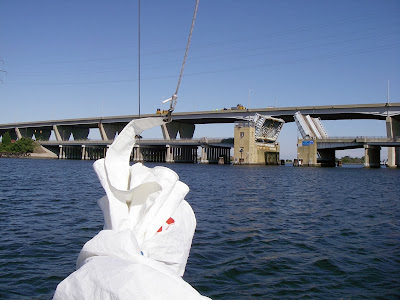 I called the bridge tender and gave him our position near red marker #6 and asked if we could make this lift or wait until the next lift 30 minutes later. He said keep on coming so we throttled up the outboard and made it through no problem at all. 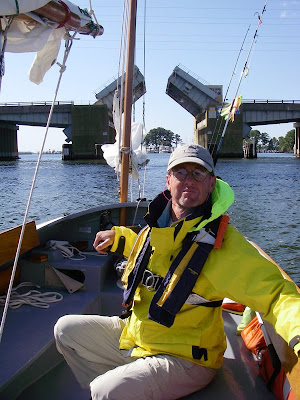 The Narrows are lined with marinas and restaurants so we decided to tie up, top off the tank, get some ice and have lunch (a good move here). We tied up at a place called Red-Eye's or something along those lines. Nice marina with a helpful attendant, but their restaurant was closed for the day. But he said we could leave Spartina tied up there and walk to a restaurant nearby. Below you see the wind tugging at the boat alongside the fuel dock, the wind was getting stronger. 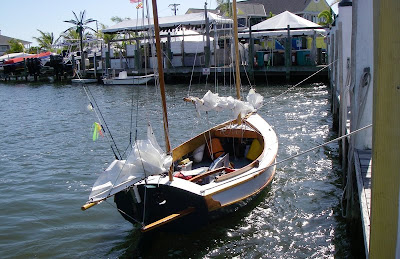 We walked next door to Harris Crab House, an old family restaurant and had a great lunch - crabcakes - looking out over the Narrows. From my notes......

It was an unplanned stop that worked out very well. By the time we fueled up and packed the ice it was just after noon. We still had a long way to go that day.