DAY TWO - up the bay 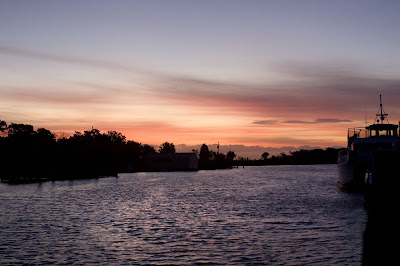 The skies were clear and the winds had swung from NNE to E the next morning. The forecast called for sustained winds to 20 mph and gusts to 25, waves two to three feet, our second day of sailing in small craft warnings. We would be sailing north in the lee of a series of islands - Smith, South Marsh, Bloodsworth, the Hooper Islands (Hooper, Middle Hooper and Lower Hooper) Island. I figured we could sail comfortably in the lee and still have the option to duck into protection if things were too rough. There were three possible anchorages for that evening - Barren Island, the Big Broads and Punch Island Creek. 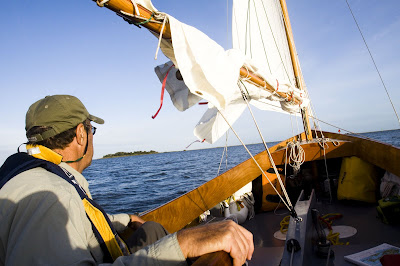 We left the dock at 7:30 and motored west along the Ewell waterfront and then raised mizzen and jib where the channel opened up a bit. At 8 a.m. we passed between the rock jetties on the west side of Smith Island where the Big Thorofare opened up on Chesapeake Bay. 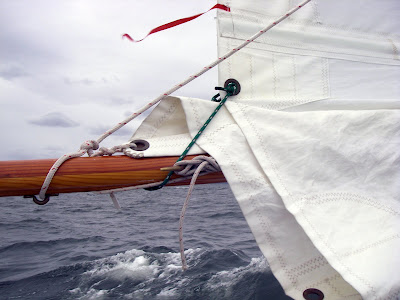 We turned north under mizzen and jib making a comfortable 4.3 knots. We waited a while to get the feel of the wind and water before putting up more sail. Once we raised the double reefed main we pushed through the chop and waves at 4.5 to 6 knots. 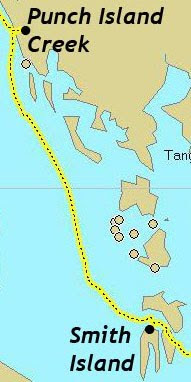 This would be our longest passage on "open water." We were used to sailing in the sounds of North Carolina where navigation is mostly line of sight. Here on the bay we could barely make out land on either side and the markers were few and far between. 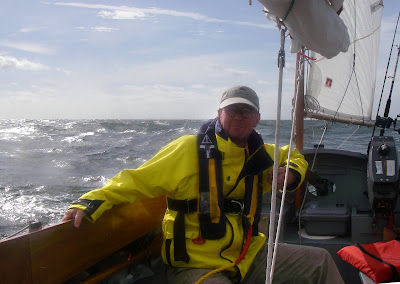 Waves, forecast for two to three feet, rolled out of the east. From our vantage point the waves were impressive but not threatening. We spent a lot of time trying to photograph the waves but with little success. But if you look at the sun on the water aft of Spartina in the photo above you'll see that it was pretty bouncy out there.

(Bouncy! Please. It was rockin and rollin like a thousand stoned hippies at a Rolling Stones concert. Where were the riot police? Steve just smiled as we clicked off mile after mile. We were making great time and all of it "distance made good". I was just glad we weren't headed into the wind like we were on the Pamlico River on our last cruise. Spartina handled the conditions with no problems, she was made for this day.) 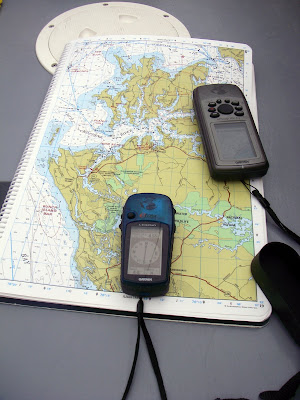 We used both of our gps's throughout the trip. Mine is older and the image on the screen is very simple. That gave us a general idea of the geography as we went. We had Bruce's much higher quality gps zoomed in on his Blue Water charts to give us a more precise view of the local navigation, markers, depth, etc.

We spotted the American Navigator, a target ship out on the bay, and soon saw a Navy war ship on the other side. After we sailed beyond the target ship we could hear the metallic echo of rounds from the Navy ship hit the rusty old tanker (I had thought they would let us get a little farther away before opening fire). Further north we spotted the Holland Island Bar marker (37 feet tall) in the distance, Bloodworth Island and Lower Hooper Island. Somewhere along in that stretch, most likely surfing down the face of a wave, we hit our highest speed of the trip, 8.6 knots. We were making such good speed it became clear that we would easily pass our first two possible anchorages, Barren Island and the Big Broads, and make it all the way to Punch Island Creek.
steve
Posted by Steve at 12:00 PM