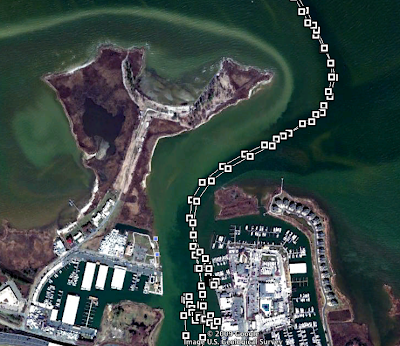 Bruce and I had a long discussion about our goals for the afternoon before leaving Kent Narrows (above). The wind had picked up with sustained wind in the mid to high 20's and gusts to 30 mph. Rock Hall was almost due north, we agreed to give it a try and see how Spartina handled on a beam reach in the wind and waves. Our fallback, if we weren't comfortable, would be to head back in to the Chester River and go to either Queenstown or one of the creeks along the way. 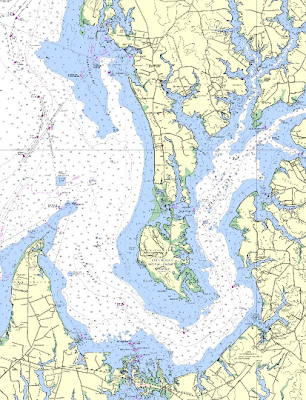 We don't have any photographs from that sail. It was just too rough to mess with the camera. The wind was now out of the west and the waves built with a fetch of about eight miles across the bay.


We made it out of the winding channel north of Kent Narrows under power, then raised mizzen and jib - plenty of sail with all that wind on the port beam. For a while were in the protection of Kent Island. But as we passed Love Point, the northern tip of the island, we got the full force of the wind and waves. And we kept on going. The boat handled fine. It was an eerie feeling being surrounded by the tall waves, many of them three feet tall and often breaking as they approached the shallows on the eastern side of Chesapeake Bay. The waves seemed to come in groups of three. Sometimes I tried to turn in to them and cross them at 90 degrees, but if I angled properly in to the first two waves I would be out of position for the third wave. Sometimes I tried to take them on the beam and worked fine for the smaller ones, but I thought it best to turn directly into the big ones. It just depended on the size of the wave and our speed at any given time. We did pretty good for the most part with one notable exception. I'll let Bruce explain that. But all I'll say from my point of view is that it was only for a brief moment that I lost sight of Bruce in a wall of white water.

We hung in there sailing north with the feeling that the boat could handle it. I stayed at the tiller and Bruce sponged the spray out of the boat. One thing that helped was that we could see the water tower in Rock Hall for most of the trip - being able to see our destination seemed to make the trip do-able. My biggest concern was that if we had a problem we could be blown towards the beach a mile and a quarter to the east. If we got closer to the beach the waves would be bigger. So I focused on keeping us on a due north heading.

Along the way we had to dodge of series of fish traps and what I thought at the time were gill nets (we later found out they were strings of crab pots placed out over the bottom of the bay with flag markers at either end). It was too hard to turn into the wind to pass the obstacles on the windward side, so we ducked between them and the shore with Bruce tracking the depths on his gps. 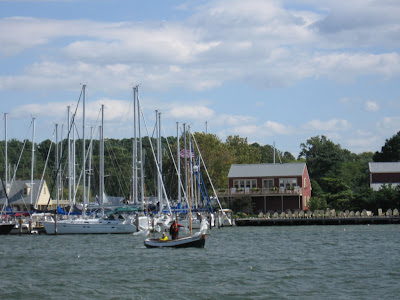 By this time on a typical day of sailing Bruce would be at the tiller and I would be looking at my notes on the harbor, marina, etc so I would know exactly where to go. But we were so busy throughout the afternoon that I had not even glanced at my notes. You can see us above in the harbor, a nice photo from Mary Lou (thank you) trying to find our marina (I just could not remember the name). Below you'll see our gps track as we wondered about the harbor finally finding the right marina by chance. 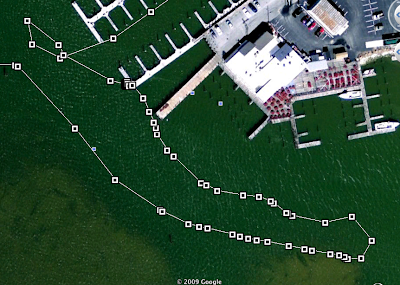 And there at the dock were two folks waiting for us, Mary Lou and Fred. They had watched our SpotTrack during the day and came down to the harbor to welcome us. Boy it was a great feeling, after such a long afternoon, to be greeted by friendly smiles. I had never met Mary Lou in person before, but she had been in touch with me during the summer passing along helpful information. It was a pleasure to meet them in person. Below is a photo of them when they dropped by at St. Michaels to say hello. 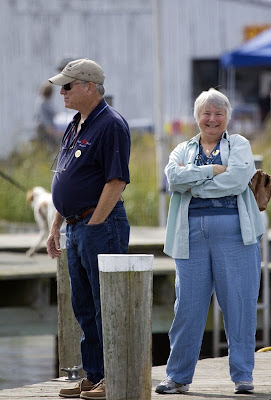 They helped us get tied up at the marina and then joined us later for a great dinner at Waterman's Crab House. And that was just the beginning of their hospitality.

Looking back I've got to say that the twenty four hours, from 3 pm the previous day until we tied up in Rock Hall just after 3 pm, were the most pleasant, interesting and exciting days I have spent on Spartina. A great afternoon anchored on Warehouse Creek, a beautiful evening under the stars and a wild ride to Rock Hall. Can't beat that.