Bruce got up in the middle of the night and mentioned there was some water in the aft cockpit and also dripping off the foredeck onto the bivys. I tucked myself a little bit tighter into the sleeping bag and went back to sleep.

Usually I do a better job of setting up the boom tent. But this time we had done it incrementally. We had been monitoring the weather on the radio and knew we were in for some rain over night. I hung the tent from the boom while we had dinner in case the rain arrived earlier than we expected, then opened up the forward area but not the back when a light mist showed up, then later put the rest of the tent up.

Because I had done it piecemeal I don't think I had tensioned the lines right. But when you consider the amount of rain that fell that night - the forecast was for an inch of rain - I thought it did pretty good. 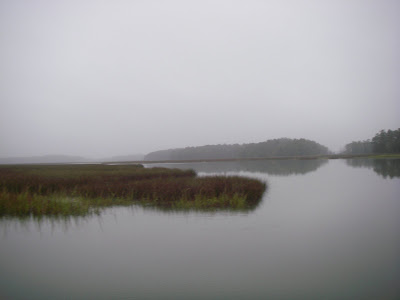 Waking up the next morning was like waking up in all those beautiful paintings you see of the marshes of Chesapeake Bay. A gray mist, marsh grass reaching out of glassy calm water, the muted fall colors on trees in the distance. It was beautiful.


A southwest wind out on the bay was pushing the water up in to the marsh. Add to that all the water from the rainfall and the marsh was flooded. Shallow water now had a foot or two more of depth. Narrow openings were much wider. It was a different marsh than the one we had anchored in the night before.

We took some photos with the waterproof camera, even broke out Bruce's nice Canon before the mist got too heavy, but never really got a photo that captured the scene. That's ok, sometimes things are meant to be photographed, sometimes they are there just meant to be enjoyed. 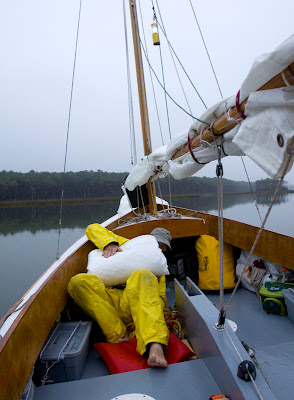 It took about 45 minutes to get the boat dried out (or as dry as it would get in the mist) and everything tucked away. That is me above getting ready to put the boom tent under the foredeck. The boat looks nice and organized in the photo, I'm happy to see it that way. Organization helps a lot when a small boat has gear for three different configurations - sailing, cooking/eating and sleeping. I think we are getting the hang of it. 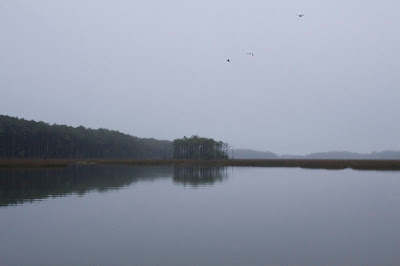 We motored out of Robinson Creek, no need to worry about the shoal in the flooded marsh, and headed west on Punch Island Creek towards the bay. Taylors Island is the land to the right in the photo below, to the left is the northernmost edge of Hooper Island. 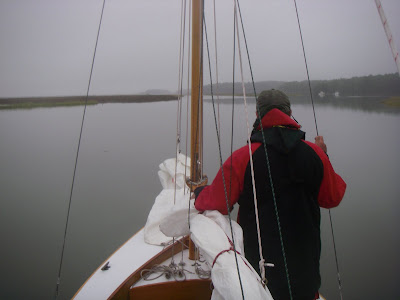 We got out on the bay, motored past some fish traps and then raised the sail. And it rained some more. No big deal in foul weather gear. What was interesting to me is that it was the third day of our trip and this was the first time we raised full sail. That says something about how breezy the trip had been. 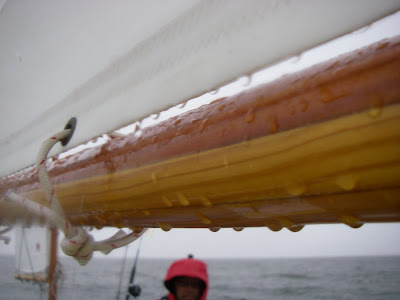 We were sailing about a mile or so off of Taylors with a nice breeze. The night before we had looked at the charts and found that with decent wind our next two possible stopping places, Oyster Cove and Trippe Bay, could be reached in just a few hours. We decided to bypass those places and head for Tilghman Island.

By 10 a.m. we could see blue skies coming our way. We were just off James Island moving at 4.6 knots. 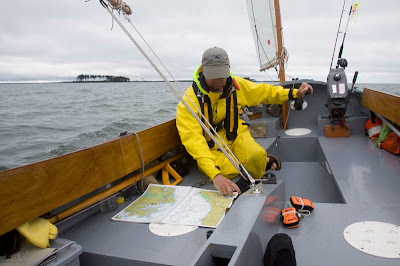 Approaching Black Walnut Point, the very southern tip of Tilghman Island, the skies cleared and wind fell off. All of a sudden it was hot and sunny. We got out of the foul weather gear, spread it out to dry and and enjoyed the sunshine. 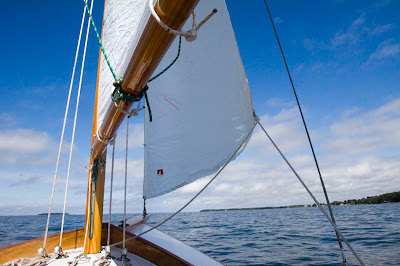