Under single reefed main, jib and mizzen, hauling anchor pulls us up right next to the marsh.  A wave from Chip aboard his Pilgrim to the east, to the west beyond Rick's quiet Wharram the chop rolling down Turnagain is smaller and not as steep as yesterday. 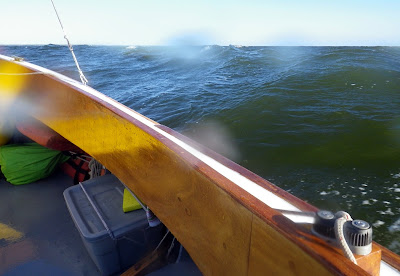 Heading north on on Turnagain Bay we pass the entrance to Broad Creek.  From there the bay angles to the northwest and we make over five knots into the wind.  Blue skies, a cool and strong wind that comes with small craft warnings.

Out of the mouth of the bay onto the Neuse River, rolling mounds of water push down from Pamlico Sound, ruffled patches on the surface showing the gusts buried into the breeze.  I shake out the reef and think about reaching Rockhole Bay just inside the entrance to the Bay River.  I point up into the gusts and Spartina shudders and loses momentum.  Up hill into the waves and into the wind, I decide Broad Creek to the north-northwest might be a better destination with a chance for lunch and a chance to wait out the winds. 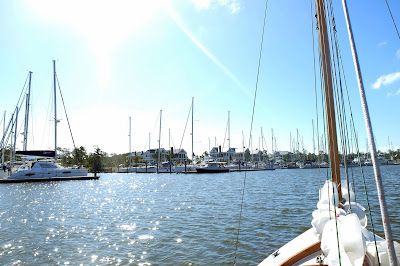 The main comes down entering the channel into Broad Creek.  Wind on the beam we sail west up the creek, turning south into a narrow channel that leads to new upscale homes and a marina filled with high-end boats.  The jib comes down and we motor along the marina looking for a place to eat.  A father and son out on a laser make a close pass and I ask them about a store or a restaurant.  They mention a little shop at the fuel dock, nothing more. 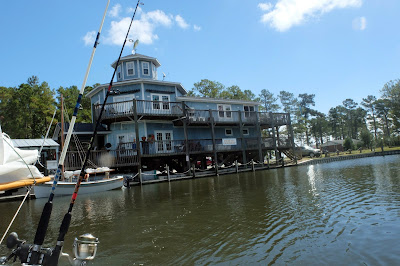 Back on Broad Creek I see Chip in his Welsford Pilgrim circling at the mouth of Burton Creek in search of Paradise Marina, tucked back in the canals, where he had launched days earlier.  We each make a wrong turn in the winding passages between houses, docks and small shrimp boats.  On a second look at a blind corner I find a narrow entrance that leads back to the marina.  I tie up for gas, Chip follows in to haul out at the ramp.

In the little store I grab some cold drinks and talk with Debbie, who recently, along with her husband Scott, bought the marina.  I tell her about trying to find a restaurant across the creek at the fancy marina.  There is a restaurant there, she tells me, but you can only get in if you are dressed "right."  Looking at my salt-stained hat, wrinkled shirt and baggy pants, she smiles.  "We've both been thrown out of better places." 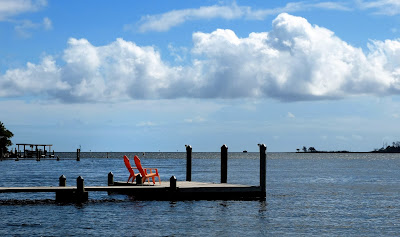 Debbie invites me to a pot luck dinner for sailors at the marina that night, but a quiet cove calls instead.  East on Cedar Creek, turning north on Green Creek I drop the anchor too close to the shore.  Tall trees block the wind - all of the wind - and the heat of the day settles down on Spartina.  I drift back from shore to where I see a light breeze caressing the water, dropping the anchor a second time on a perfect fall afternoon. 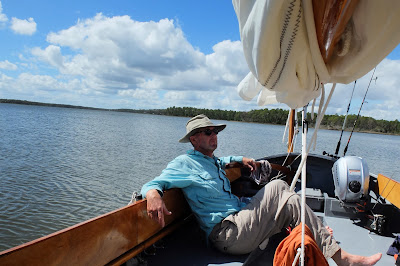 It's an afternoon of leisure, one of relaxing and listening to a college football game, an in-state David vs. Goliath struggle with the smaller school walking away with an enjoyable victory. 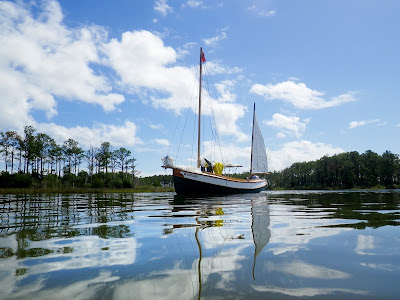 It is an afternoon of wading in the cool water, exploring along the marsh grass with blue crabs clinging to the stalks, making casts up along shore in search of fish that - at least for me - are not there to be found. 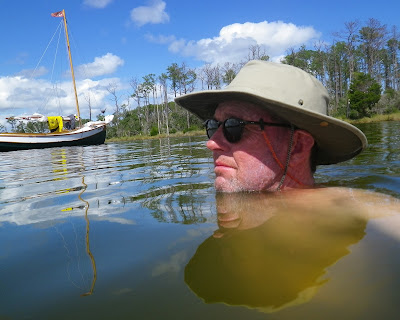 It's an evening of cleaning the boat and reading, and wondering why on a sailing trip I spend so much time sailing and not enough time anchored in peaceful coves. 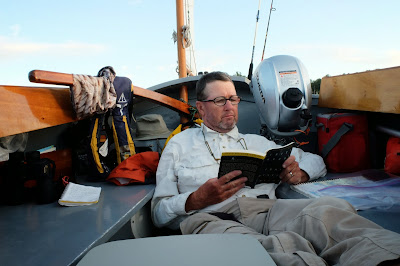