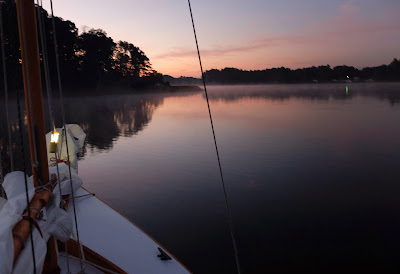 I wake in the calm night to the low rumbling of a tug's diesel as it passes by on the ICW.  I fall asleep looking at the Milky Way, then wake to the bright moon.

Up after 6:00, a heavy coating of dew on Spartina and patches of fog on the river.  I look north to see the sloop anchored last night has already left.  Or maybe it is hidden in the mist. 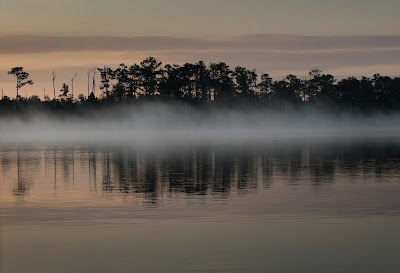 Finally getting the morning routine down - roll up and stow the sleeping gear, bring in the anchor light, tie the kit boxes in place, sponge off the dew.  Get out the chart book, jot memories from the night in the notebook, put on the sun block and set out the cup of fruit and breakfast bar.  I find comfort in the routine.

Raising anchor and under power on a windless morning, we turn back into Cedar Creek by the old fish house with its noisy chiller and old shrimp boats tied to old wooden docks.  I take too many photographs, but the shrimp boat and bent trees with spanish moss reminds me of a time I thought was lost.  But it's not lost, I just had to look harder to find it.

Turning west towards Adams Creek the fog lifts and I see my anchorage neighbors were there all along. 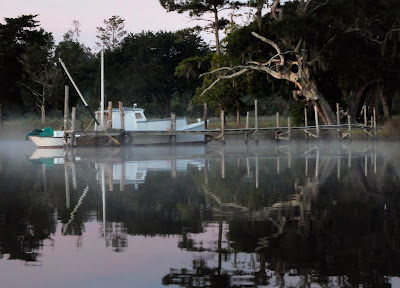 An eagle flies overhead.  Fog comes and goes, and I can't figure out which side of the markers I should be on.  I have to open my notebook to figure out what day it is...Wednesday.  It is chilly in the shade of of the trees on the east bank, I'm glad I layered on a couple of tee shirts. 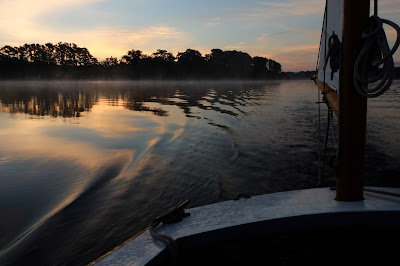 Drifting in the canal at 8:00 I top off the outboard's fuel tank, smoke from a fire somewhere on shore giving a rich sweet smell to the light fog.  Blue skies above and warmth when we leave the shadows.  A barge out of Aurora passes underneath the bridge ahead of me, maybe the same barge I saw a few days earlier on the Alligator River. 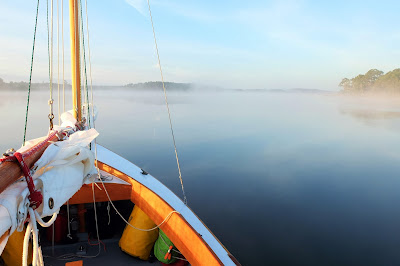 A tiny rainstorm passes overhead as we raise full sail where the canal opens into the Newport River.  Out of the fog, out of the canal, we find wind and make 4.5 knots passing the ICW 200 mile marker.  Heading into an incoming tide the wind swings east, gps shows we are making three knots or better. The channels of the Newport River confuse me. They always do.  Two parallel canals, one with reaches that are straight, is to the west.  I follow the channel to the east with its curves and marshes, prettier and less commercial traffic.  But the channels cross at two points, red and green markers on the same piling leaving me with questions.

We cling to the east shoreline, then round the point in time to call for a 10:00 a.m. lift at the bridge.  The bridge tender wants the sails down and I am happy to comply, the tide swirls under the spans and we go through under power.  Seagoing fishing boats are tied alongshore at the end of the old causeway.   Passing the research boats and labs of Pivers Island we turn east to the beautiful Beaufort waterfront. 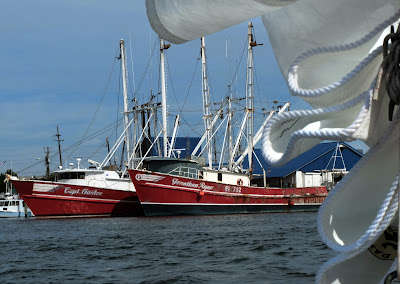 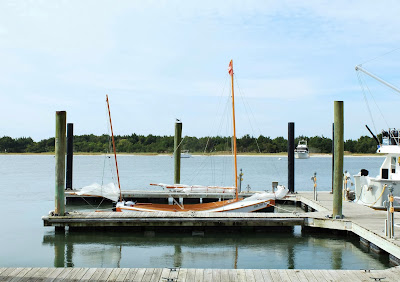 Keep it rollin'. I'm right with you. Vicariously that is. Oh, I still have one of those wooden nickels...

Great photos, Steve. Wise to linger for them.

Curt,
you are a better man that I if you were able to keep a wooden nickel.

Barry,
thanks. can anybody to too far wrong with mist and dawn and water?