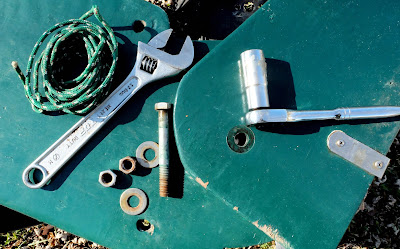 On the early morning walk with the daughter the clouds and morning chill convinced me that the day would never warm.  That is the the way late fall and winter are for me, a feeling that warmth - never mind hot days - will never return.  I'm fooled each winter, and I was fooled again today.  By late morning there were blue skies and, yes, warm temperatures.

But the early morning convinced me that I should start Spartina's off season work, start thinking about being ready for next year's first sail.  Instead of hooking up the trailer, it was a trip to the hardware store for sandpaper, heavy gloves and plastic sheeting. 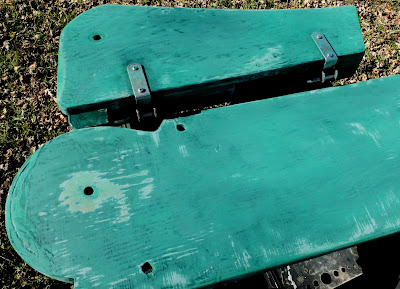 Repainting the dark green hull is at the top of my to-do list.  Spartina has had only touch-up paint since her original launching, she deserves a good coat of paint.  Today I sanded down the rudder, the stock and the blade which you see above, experimenting with different grit sandpapers.  Using the 27-year-old Makita finish sander that made Dad gave to me when we worked on our first boat building project together in Texas, the 150 grit paper seemed to work the best.  I do not want to strip down to bare wood, or even the primer.  As Mary Hadley at the old Elizabeth City Shipyard told me years ago, I just need to get the "diamond" off the paint.

I had no doubts, when discussing the end of season sailing with others, that I had sailed in early December.  Certainly last year.  If not then, well, it had to be the year before.  So much for my memory.......I was never good at dates anyway.  Fortunately I have my notes on this blog to set me straight.  I'm not happy about being wrong, but I did enjoy going back and recalling the last sail for the last few years. 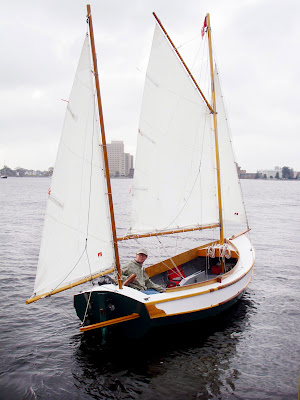 The forecast was for rain on November 21, 2009, but the day brought blue skies and a nice breeze.  I sailed that day with the USS Bainbridge, with her markings of a skull and crossed swords from the "Captain Phillips" rescue, some Canadian snowbirds, the tall ship Amistad and my oldest daughter, who took the photo above as I dropped her off.  After a sunny morning the promised clouds rolled in as I headed to the ramp. 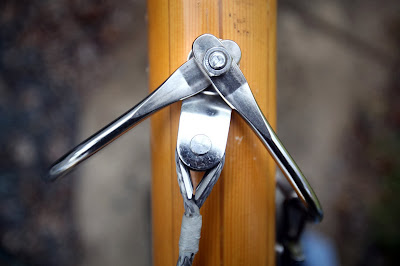 I did not record the last sail in 2010, but it was over by November 7 when I started taking the hardware off main and mizzen masts.  Stripping down the masts to bare wood, coating with epoxy and layering on seven coats of varnish with sanding in between each coat kept me busy that winter. 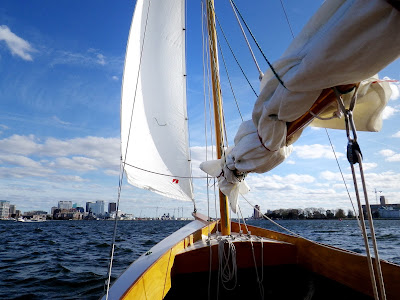 A blustery sail concluded the sailing season on November 28 in 2011, what I realize now as in fact being the latest sail in a calendar year for Spartina.  Just a few boats, including a budget cruiser out of Baltimore called Wayward Wind, were on the Elizabeth River that morning.  Later I picked up my friend Paul on the water front, sailing under mizzen and jib in the warm southerly wind. 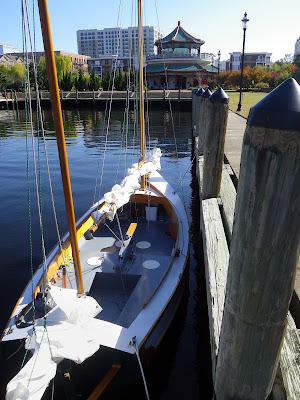 We had blue skies and a warm wind out of the SSE for the last sail for Spartina on November 12, 2012.    Lots of cruisers headed south on the Elizabeth, most likely delayed by Hurricane Sandy which had passed by just a couple of weeks earlier.  I had hoped to sail Spartina at Ocracoke over the coming Thanksgiving weekend, but Sandy had washed out the road on Hatteras Island and trailering the boat was impossible. 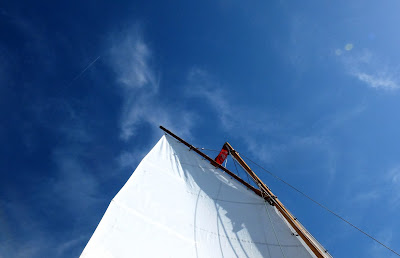 My last sail this year, I now know, was November 22.  A great sail with the warmest weather that I can remember late in the year.   I had hoped to get in one more sail, and I could have done it today (and I could have made good on my claims to a December sail!).  But it feels good to get a start on the off season work.  No complaints here.

We sailed to Manteo for their "Christmas by the Sea" weekend a couple of years ago. It was warm and turned into one of the most enjoyable weekends.

The streets are full of people milling around a large bonfire and entertainment on the Old Court House steps. On either side of the "stage", large movie screens show movies and slide shows of old Manteo. Lots of blowing (fake - bubbles/suds) snow and laughter in the air as well as singing and caroling.

I got orders from the Admiral today to put Papoose away for the winter. It broke my heart to think about it. I started on my winter list too.