Green Creek at dawn.  Overcast.  A dirty yellow glow behind the trees to the east brightens the morning.  Cool.   I turn on sports talk radio and get religion instead, it is Sunday morning. 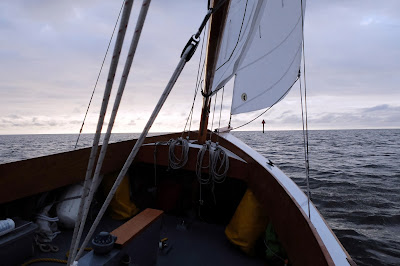 Rounding the shoal at Piney Point at 8:00 a.m., five knots with winds gusting to 18.  Broken clouds overhead, markers on the horizon appear and disappear with the changing light.  Looking at the luff on Spartina's gaff-rigged main I realize Stuart, my sailmaker, was right - I do need a downhaul. 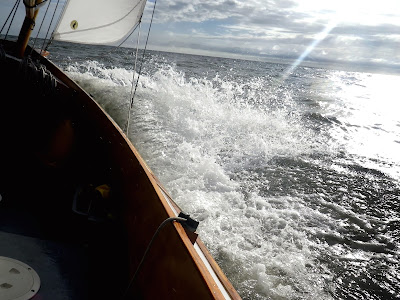 A little after 9:00, Maw Point and Pamlico Sound, sailing NE at 4.3.  Across the mouth of the Bay River, Sound Bay and Jones Bay.  Sow Point at 11:30 and we feel a change in the wind.  The trolling line goes out at noon.  I think about it being Sunday again, and I think about last Sunday with the rain, mist and fog of the Alligator River. 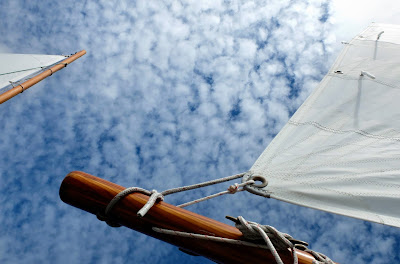 Just after noon I see a marker I did not expect.  I look at the charts, pass close to the marker and realize I've crossed into a prohibited range around a bombing target.  A Sunday cease-fire and no harm done.  The clicker on the drag goes off, a brief fight and we reel in a lure bitten in half. 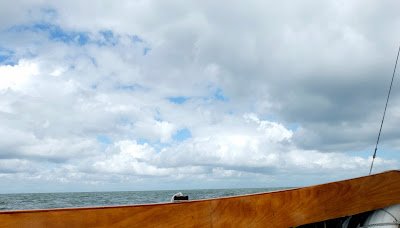 Waves out of the west crossing the Pamlico River.  The wind falls off, the boat rolls, rigging rattles and the centerboard bangs.  Wind fills in as we see the Swan Quarter to Ocracoke Ferry in the distance to the NE.  Wind swings NE, fails and we are under power.  Lose a small bluefish on the trolling line, then something larger bites another lure in half.  Wind returns, making 4.5 towards Great Island. 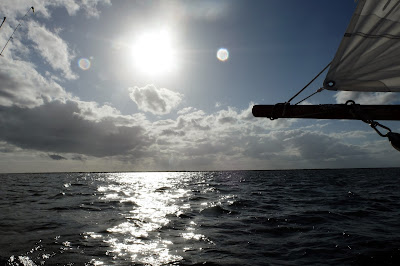 Wind falls off, under power on choppy water over a shoal.  I think the cb touched bottom, but maybe not.  The chart shows deep water but there was a definite bump.  Overcast.  Wind comes back out of SE, waves rolling out of the east coming down around the curve of Bluff Point to Swan Quarter Bay.  Dark, confused water that I share with a shrimp boat and a ferry bound for Ocracoke. 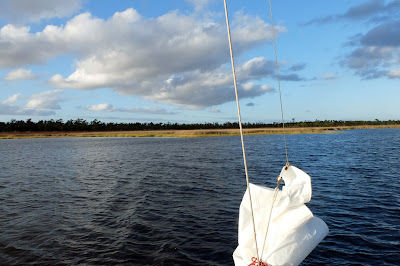 Juniper Bay.  Skies lighten.  A tiny cove on the NE side of the bay, shallow, with dolphins swimming nearby.  Anchor down at 5:30. 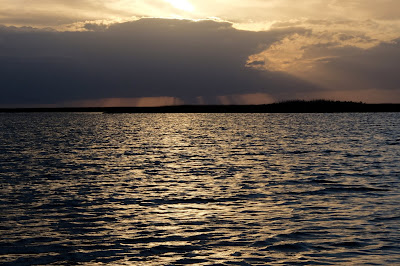 Lying in the sleeping bag at sunset I look up to see a cormorant come in for a landing in the cove.  Coming in between the main and the mizzen, the cormorant doesn't see the topping lift - the line that goes from the top of the main mast to the end of the boom - until the last second and makes an awkward flare of the wings to avoid the line.  A minute later another cormorant does the same thing, or maybe it was the same bird.  And then a third time, wings splayed, feathers fluttering, feet spread awkwardly and a final near miss.  I fall asleep.

Steve, I love the post! Could you please give us the low down on the new outboard. I am looking to put one on my Tread Lightly this spring? Thanks