I'm very happy to see Spartina has made her second magazine cover, this time the No. 85 edition of Small Craft Advisor.  I was unaware that it was published until I heard from Rik, who is building a Pathfinder in Aruba (plenty of wind down there for sailing a Pathfinder I hear.)  Josh, the magazine's editor, had emailed me a while back asking for some photographs.  He said they had plenty of West Coast boat photos in hand but were in search of some images of an East Coast boat. 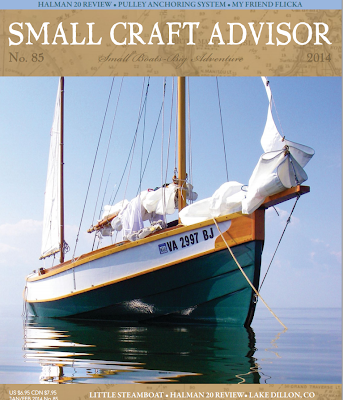 I will have to drop by Barnes and Noble to see if I can pick up some copies of magazine, I would like one for a keepsake.  (All of our magazine subscriptions had to go during budget adjustments as the girls went off to college.)  Small Craft Advisor is an excellent magazine.  It is what I think of as the modern version of the old Small Craft Journal, the magazine that led me to building a kit boat and then the original Spartina, a Devlin-designed Nancy's China, back in the 1980s.  SCA has the same feel as Small Boat Journal -  small boats, affordable budgets and great sailing stories.

The photograph was taken on one of the early cruises, maybe six year ago, on a very calm day on Pamlico Sound not too far from Cedar Island.  There are not many days when it glassy like that on the Sound.  I've anchored in several coves, creeks and bays for a swim, this was the only time I've anchored on a Sound and jumped in the water.

Thanks, Rik, for the heads up.  And thanks, Josh, for using the photograph.

Thanks you, everyone. I appreciate it. Just need to wait until next season to get some new photographs.

Congrats Steve! Very well deserved! You exemplify what this magazine is all about!

If She appears on another magazine cover, you will definitely have to consider hiring a press agent.

Got my subscription copy today, and cover is outstanding.

I can't remember if one of your travel trips is amongst my back issues dating back to 2005.

One of your trips should be a future feature article.

somewhere in those back issues should be at least one, if not two Spartina stories. I'll have to do another one when Josh gives me the ok.

Unfortunately, SCA decided to make her a Navigator in their acknowledgment on the inside cover. LOL

Yes, Jim, I've heard that. I think the Navigator, because it was first, gets the name recognition. I don't mind, it's a nice boat too.