day two - waiting for the sun

The tap-tap-tap of light rain on the boom tent in the middle of the night.  Then the steady drumming of a heavy shower.  Warm in the sleeping bag, I reach my hand out of the bivy and touch the spot on the bunk flat where water collects when it gets inside the tent.  There is no water.  I smile and slide back down into the comfort of the sleeping bag. 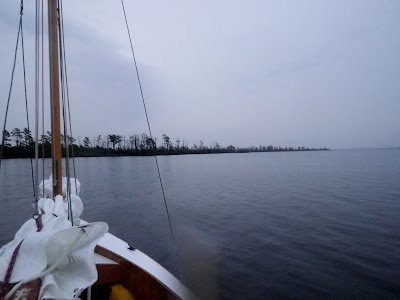 More rain, mostly heavy rain.  I wake in the morning to find everything damp.  Under the boom tent I slip on my clothes and then foul weather gear, loosely roll the damp sleeping gear and tuck it beneath the foredeck.  I bring down the boom tent, pleased to find a brief break in the rain.  The main and jib go up, spilling both water and dead mosquitos that had sought refuge from the rain.  We motor out of the Little Alligator river, past the stilt house of yesterday's musical interlude that I now see is called the "Alligator Hilton Sporting Club." 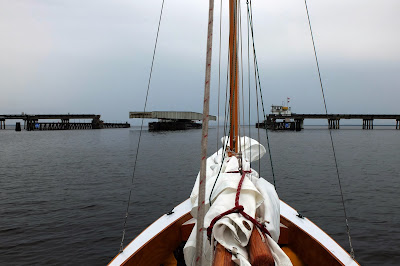 Past the duck blinds and crab pots we catch a breeze, making just two knots towards the Alligator River bridge.  I see the mast of a sailboat, thinking it is on the far side of the bridge waiting for an opening.  We go back under power, hoping to get through on the same opening.  But the distance has deceived me, the boat has already passed through the bridge.  We continue on under power, using the vhf to request an opening.  The bridge tender tells me to keep coming, he'll open when I a few hundred yards away.  We pass through at 8:25. 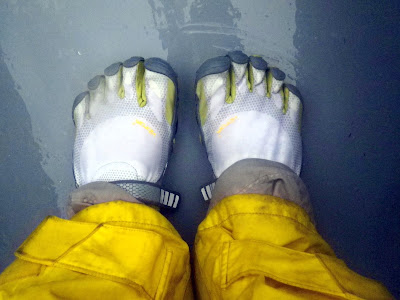 Where is the promised wind?  The forecast calls for a west wind, swinging to north.  All we find is a barely noticeable southwest breeze.  We sail in the light air, the water calm and I hear the bow gurgling and the traffic on the bridge.  There is rain and mist and fog, soon we are under power again. 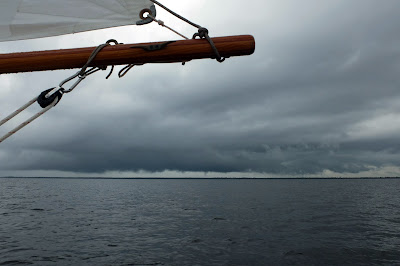 A hint of light skies to the northwest, no wind.  At marker "16" I look to the east where there is a small creek that leads to Buffalo City, a logging town buried deep in the swamp that no long exists save for rusting machinery and rail tracks.  All I see is a tree line in the haze.  Marker "20" comes with a light breeze out of the east, which adds .3 knots to our speed.  Rain on and off, the low overcast is gloomy.  A sign indicates "Mile 95" on the ICW.  I check my charts to see it is 30 miles to Belhaven.  I remember it is Sunday and I could be at home getting ready to watch football games. 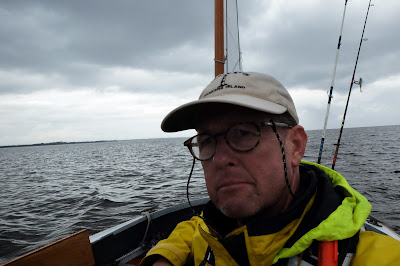 With rain, fog and - finally - some wind, we round Newport News Point to enter the Alligator River-Pungo River Canal, making three knots.  A large sailboat passes by in the mist, a quick wave from the man at the wheel and I envy him for the dry cabin on his boat.  After a couple of bends at the canal entrance, the waterway straightens out and is lined by tall, wind-blocking trees on both sides.  Under power again, but with a helping tide that carries us at 4.5 knots.  I look at the chart and I look at my gas can, wondering if I have enough fuel to motor the entire distance.  A barge passes by, then a trawler out of Rhode Island. 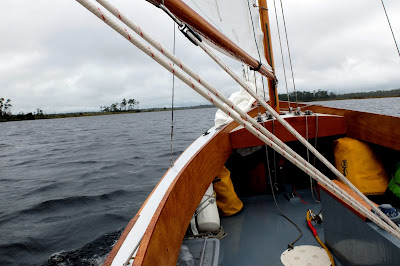 Early afternoon the canal crosses the path of the narrow, winding beginnings of the Alligator River.  It is a flat marshy area with no tall trees.  I put up the main to catch the breeze, enjoying the peaceful sounds of wind and water.  Soon the trees are back and the outboard is running again. 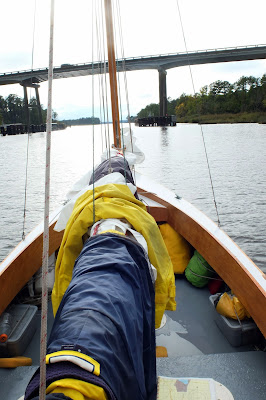 Weather radio gives local observations and use the word "clearing" or the even better phrase "blue skies."  In the early afternoon I mentally track the clearing, which starts to the north and west of us.  Elizabeth City, clearing.  Edenton, clearing.  Washington, blue skies.  A patch of blue mixes in with the dark clouds above Spartina, then shafts of sunlight.  I take off the foul weather gear, spread it out to dry on the main boom.  The bridge up ahead tells me we are close to Wilkerson Creek, the western end of the canal.  There is gas in the can to spare. 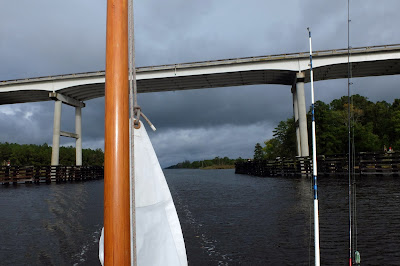 Passing beneath the bridge the canal opens to Wilkerson Creek which leads to the Pungo River.  We turn north on to tiny Rutman Creek, dropping anchor under blue skies at 5 p.m.  I spread out the sleeping gear to dry in the light north wind.  North wind, finally. 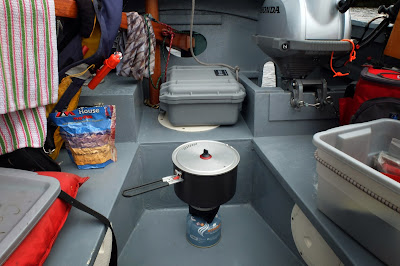 Freeze dried lasagna for dinner, then Sunday night football on the radio as I drift off to sleep.

The Alligator River trip is definitely on my bucket list for 2014.

My route will be about 220 miles, starting at my marina at Matthews Point off the Neuse River.

Now I can follow your stops and anchorages as I'm reading. Use the "Nautical" Map Mode.

Guidebook is so helpful on and off the water @ www.activecaptain.com/