anybody ever seen the shellfish guy and santa in the same room at the same time?

Picked up some Christmas supplies at Uncle Chuck's, my shellfish guy.  Below is a Caison's Sandy Points "Rock Piles" oyster from Cherrystone Inlet, just north of Cape Charles on the Eastern Shore's bayside.  I ordered 25 of those, with an earthy and subtle bayside flavor, for Christmas evening, to be served on the half-shell with cocktail sauce and slices of lemon, accompanying a big bowl of chili with a dollop of sour cream on top. 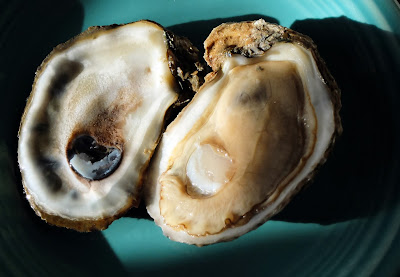 I say I "ordered 25" because there is no telling me how many he put in the bag.  Chuck tells me he is a product of the Baltimore area schools where, apparently, math is an optional class.  I ask for six oysters, I get home to find 10 in the bag.  I ask for 10, I might get a dozen.  I mention math to Chuck and he tells me its his gd business and not to worry about it.  So I don't. 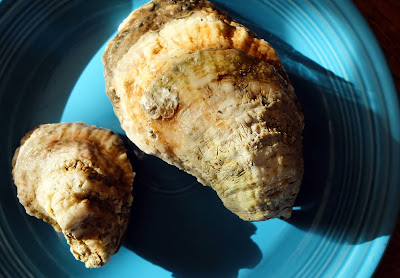 I did order six of Mark Sanford's Church Point counts from just inside the mouth of the Lynnhaven River.  These are huge, wild caught oysters, one of which you see at the right above (the other being a Rock Pile).  So you get an idea of how big they can be - and that is not even the biggest one.  I will serve those Christmas day with my poor man's Oyster's Rockefeller recipe, though "poor man's" is probably not a good description when it involves garlic butter, panko, proscuitto and basil.  Broiled in the deep dish of the shell, they become individual servings of a simple oyster loaf.

As I said, I ordered six of them.  Just looked in the bag now to find seven.  Maybe its the math, maybe generosity, or maybe the holiday spirit.  Thanks, Chuck, and merry Christmas.