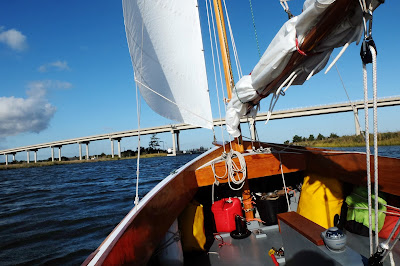 A late morning, no rush as we won't be going far.  Tucked up in the tiny cove we tie in a reef, a second reef, then tightly wrap the main to the boom with no expectation of raising the sail on a windy day.  Small craft warnings, winds 20 to 25 mph out of the north.  Anchor up, sailing mizzen and jib across Thorofare Bay just after 8:00.

Sailing south of Cedar Island we are protected from the waves, but I wonder about my friends, expedition racers staged six miles away on the north facing beach of Cedar Island and wonder what the waves must be like pounding in from Pamlico Sound.  Three hundred miles of racing ahead of them, small craft warnings for the next four days. 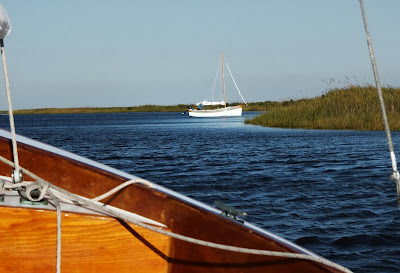 The strong winds carry us southwest to the curving entrance to Thorofare Canal, under the bridge and west northwest through the canal.  Ahead is a sloop tied to shore, the water calm but wind whistling through the cord grass.  It's Chip in his Welsford-designed sloop, a friend who I had met only through emails. Out for a few days sailing, he has sought refuge in the canal.  Mizzen and jib with wind on the beam, I tack back and forth as we talk about the wind and the forecast of continued winds for the next few days.  A brief meeting, then goodbye as I turn back west on the canal. 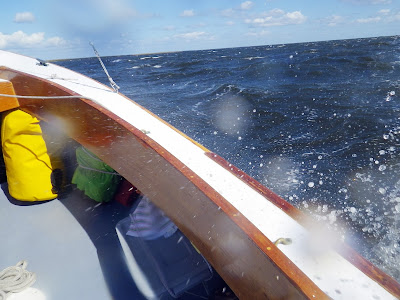 A battering sail up West Thorfare Bay, exposed to the wind and waves and spray rolling down from the Sound, rounding Long Bay Point and west again towards Old Canal, Spartina's starboard side slapped by waves and salt spray.  Calm in the old canal, the wind hisses across the marsh. 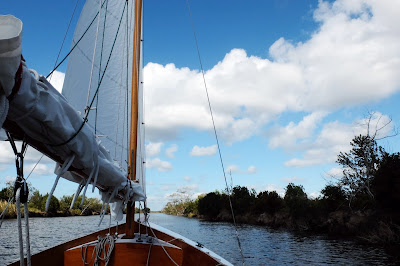 At the west end of the canal we turn north on Turnagain Bay.  Steep, steep chop and wind on the nose.  The sky is blue and the white puffy clouds fly over us.  I start the outboard to push through the waves.  The jib, flapping loosely, is not helping, so I run up forward to bring her down.  The bow is bouncing up and down, the steep-faced waves casting spray and the jib snapping back and forth.  Kneeling on the foredeck, I look up to grab the head of the sail, the wind catches the broad brim of my Harker's Island hat.  I look back to see the hat falling into the cockpit.  I step back down, put the hat back on, climb back up on the foredeck and look up once again, the hat flying off and this time into the water.  And I question, but only briefly, my IQ. 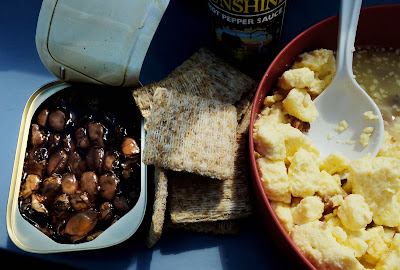 Anchor down not yet late morning in a tiny creek off the bottom of Turnagain Bay.  A different world hidden behind a stand of trees - calm water, quiet and warm sunshine.  Brunch of eggs from a freeze dried pouch and smoked oysters on crackers, plenty of protein to make up for the long pounding up Core Sound.

A text from my friend Paul on the beach at Cedar Island: start of race delayed.  Another text over the cell: race cancelled.  The organized event won't happen, competitors can launch at their own risk.  Knowing Paul, his family and friends, they will launch, it is just a question of when.

Hat - my other hat - tilted over my eyes, I fall asleep. 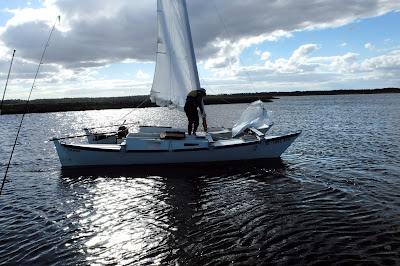 Shouting wakens me, worries me.  Up with a start, I see a man on a catamaran.  He waves, asks if he can can tie alongside.  Slightly confused, I say yes, wondering if something is wrong.  His name is Rick and he is from Raleigh.  The boat is a Wharram, a polynesian style catamaran that he built and now sails on the coastal waters.  The SPOT tracking device on Spartina was sending signals to a satellite thousands of miles out in space, the satellite receiving the signals, sending them back down to earth where each signal is translated to location on a web page.  From the Sounds Rick had used a cell phone to call his wife in Raleigh, asked her to look at the web page to see my location.  And there we were.

Rick is a nice guy who does a lot of sailing, and enjoys that sailing in a way that few people do.  We compare notes, talk about waters we have both sailed, take a look at each other's boat.  It is an enjoyable afternoon.  As we sit and talk another set of sails enter the creek.  It is Chip aboard his Welsford Pilgrim.  Now three boat rafted together on an unnamed creek, an unexpected pleasure.  Wind still howling, Rick decides to head out for a sail, his Wharram being comfortable in high winds.  Chip and I stay anchored in the creek, Chip breaking out a bottle of fine red wine.  Wine tastes good drunk from a coffee cup. 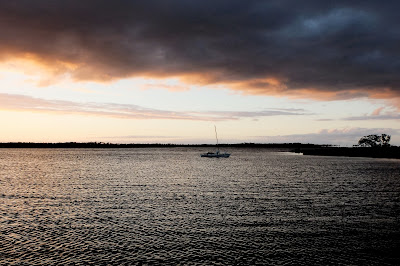 That night I go to sleep with Rick's Wharram anchored to the west and Chip's Pilgrim to the east.  Dark clouds pass overhead as the evening sun shines on the tiny little creek.  While the world feels a little smaller, the quiet marsh is a little more friendly. 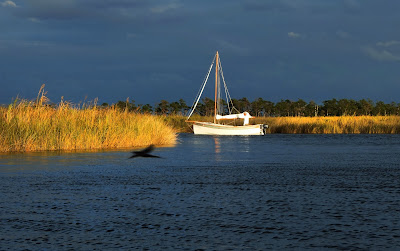 Hi Steve,
It was good meeting both you and Rick out there. I left the creek on Turnagain Bay about an hour after you and Rick left shortly after me. The waves were large and steep in the Bay and the last time I saw him, he was literally flying from wave to wave in his cat, on his way to New Bern!
Hope you have a Merry Christmas!
Chip

Thanks, Jim. Have a great Christmas.

Good times Steve. Its funny how high tech brought together three homebuilt traditional wooden boats in a small corner of the marsh that day.

It was a nice little gathering of interesting boats! steve