The laundromat in Beaufort is where I learn exactly how long 31 minutes is.  That is how long it takes the washing machine cycle to run.  It is long enough to learn that there used to be two laundromats in town, now only one.  Long enough to visit with the guy from up north, now divorced and settled in a house he needs to refinance so he can settle up with the ex.  Long enough, with the machines droning in the background, to hear that he is still angry with the guy that stole his mooring out on Taylor Creek, and how someday that guy might come down to the waterfront to find the mooring empty. 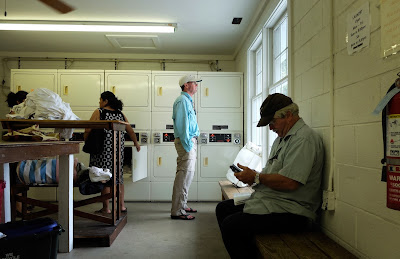 In the warm muggy room behind the ice cream store, it is long enough for a local, an Old Salt in his telling, to show up on his motor scooter with a load of laundry, wash his clothes and start an argument just for the sake of arguing.  Long enough to realize that the Hispanic woman does not speak a word of English, but her daughter does.  Long enough to eye each other warily, wondering of the four loads in the washing machines, whose will be done in time for the two open dryers.  I get the second dryer.  When I walk out with my clothes clean and dry, the Old Salt is still arguing with the poor guy that doesn't want to argue. 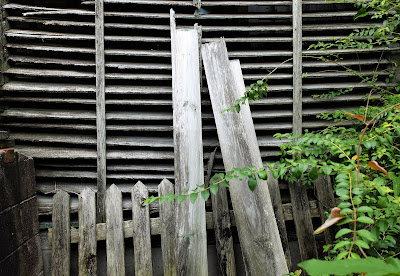 I walk the Beaufort waterfront, enjoying the wood I find along the way.  The old, weathered wood of a house that dates to the Civil War, and the fresh planks on a new boat being built at the Maritime Museum.  I window shop at the stores along Front Street, check out the menus of restaurants that serve shrimp and grits, and photograph the victorian homes from the 1800s, all painted in white.  Turning inland for a few blocks I visit the old burying ground where the lichen covered headstones rest stoically in the shade of live oak and magnolia trees. 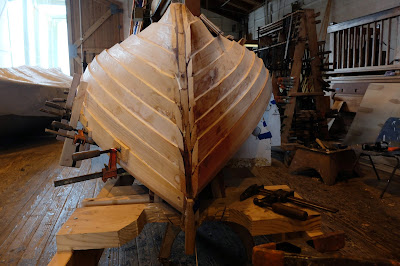 I drop by the dock masters office, finding the Old Salt from the laundromat there.  The dock master tells him about Spartina, the Old Salt tells me it is a Drascombe.  I say no, it's a design from New Zealand.  It might be marketed under a different name, he tells me as he gears up for an argument, but it is really a Drascombe and I just don't know it.  Having built it with my own hands, I think I know what kind of boat it is.  Unwilling to engage, I walk back to my boat, which is a Welsford and not a Drascombe.

Later that day, walking down the street I pass by the Old Salt again.  He's talking with another man, telling him about an argument he had won.  I smile and keep on walking. 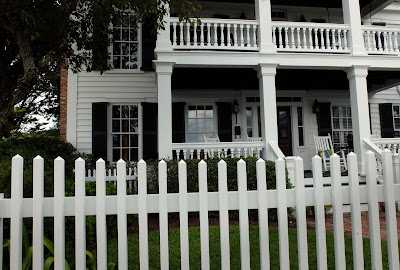 Early evening I notice a sign outside a bookstore just up from my dock advertising an appearance by a southern writer.  Curious, and also because someone had mentioned there might be wine served there, I go into the bookstore.  Looking for the wine I find myself instead standing next to the author.  I can't think of anything to say so I ask him about writing.  And because of my clothes, because of how I looked after five days on the water, because of my long-billed hat and the dark sunglasses hanging from my neck, he asks me about my sailboat.  I point out the window to Spartina. 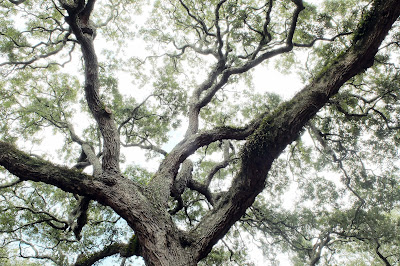 The writer sees a connection and starts talking about writers putting words together just like a boat builder putting pieces of wood together.  A lot of people can write pieces of a story, he says, but the trick is to make them all fit together.  It's just like your boat, each piece of wood needs to shaped just right to fit the wood next to it.  And we talk about how and when and why people write and the compulsion that drives creative people to do what they do.  Then we are interrupted.  He is there of course to meet with his fans, and I have already taken enough of his time. 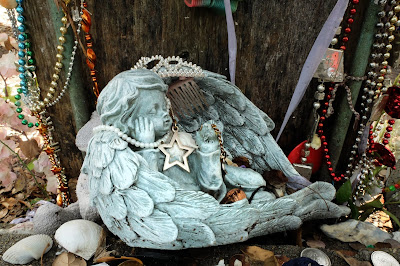 Later that evening the writer and I stand on the dock next to Spartina.  He asks about building the boat.  I ask him about his books.  He tells me a story about his mother sitting down in a cane chair, one that she did not know was being repaired.  She sits down, sinks into the chair and finds herself stuck in the chair.  And there she stayed until somebody eventually found her and helped pull her out.  His mother told the story so wonderfully, he said, that he used it almost word for word in his most noted novel.  Of that story, a northern writer once told him "That's the problem with you damned southern writers, everything that happens down there is so strange that you don't need to make anything up."  Some of the best fiction, he says, is not fiction at all. 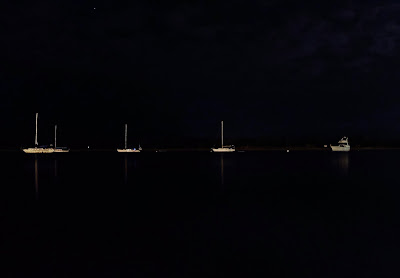 It is dark and the sailboats moored across Taylor Creek catch the light from the waterfront.  Weather radio forecasts north-northeast winds in the morning, perfect for a southeast run across Onslow Bay to Cape Lookout. I slip into the bivy and think about the day and the people I have met, the places I have been and the things I have seen, all because I managed to fit a few pieces of wood together just right.

Hi Steve
You do a good job putting the words and photos together, too!
Bet you were surprised to learn that you had built a Drascombe?
Enjoying your blog, as always.
Chip

Good to hear from you Chip. We'll be crossing paths in a couple of days on the log. steve

As always, your words and images are wonderfully evocative and I appreciate your sharing them.

You've done much more than fit a few pieces of wood together. You've woven together your approach to grasping life by the tiller, your courage to sail out of the harbor to where few others venture forth, and your ability to observe and enjoy the far shoreline. How appropriate it is that you weave these elements together with your Spartina, whose name ultimately derives from the Greek for rope or cord.

Many more happy adventures to you!

Thank you, Michael H., you've just taught me something about the word Spartina!

But it IS a Drascombe

Great writing Steve, especially that first paragraph. It is a treat to read your passages on a cold winters night. keep up the good work.

Rick,
I was sorting through photos of your boat earlier today, it brought back some good memories.
steve

You have hooked me on the written descriptions of places I can see in my mind.

I plan to leave Matthews Point Marina on "Alert" and heading out Friday for Belhaven & the Alligator River.

Thanks for leading the way.

Now, your daily log will be my "Tour Guide"

Maybe I'll run across that feller playing music on his porch to an audience of one.