scandinavia, a good sail and a tow 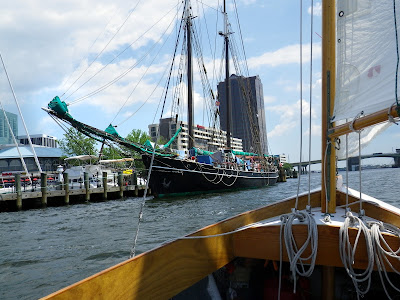 There was a decidedly scandinavian feel to the harbor this morning.  The first visitor I saw was the tall ship "Opal" out of Denmark.  Built in 1951 in Germany as a Baltic fishing trawler, she now appears to be used as a charter boat.  She had a young, happy and friendly crew on board.  Lots of waves and smiles. 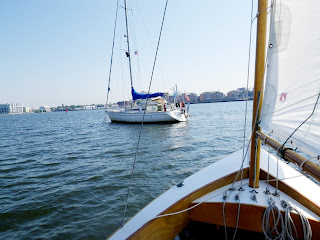 Just across the river in Crawford Bay was Skamlös out of Oslo, Norway.  As best I can tell from their home page it seems to be a family making a three or four year circumnavigation.  Pretty cool.  Enchantress, from Rhode Island, was also in the harbor, along with a trawler-style power boat.

The wind was better than advertised.  Sunny and comfortable, it was a great day to be on the water.  Very relaxing.  Plus I got to see, and help out, a good friend.  I was down the Elizabeth River near the entrance to the western branch when I saw Paul out in his inflatable dinghy rowing across the river.  He had a nice four stroke honda on the transom but it clearly was not in use.  Paul was going from his home off the Lafayette River to pick up his Tartan 34 at a boatyard when he ran out of fuel (proving that he, like the rest of us, is human).  I've written about his boat Ode to Joy before.  Paul is, as I said, a good friend and a longtime co-worker.  We've canoe'd through swamps, dove on sunken boats, explored the Eastern Shore and spent many days miles off of Cape Hatteras on the gulf stream together.  He is retired now, at least from the regular job, but keeps very busy writing books and magazine articles. 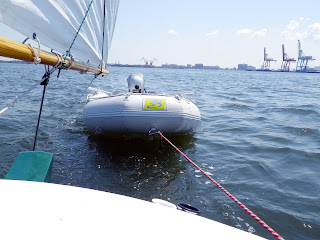 I took Paul on board and, while towing his dinghy, sailed to the boatyard.  I had not seen Paul in a while, it was a nice, unplanned opportunity to catch up with him.  And I think he enjoyed the sail on Spartina more than he would have enjoyed the long row into the wind. 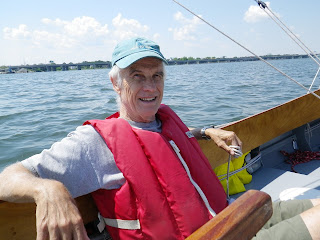 In other news I'm very happy to see that Webb Chiles had taken possession of his Moores 24 soon to be renamed Gannet.  It is a return to small boats for Webb, I first heard about Webb years ago as he attempted to sail an open cockpit Dramcombe Lugger around the world.  I can't wait to see what he does with this boat.  In the near future he'll be sailing on the great lakes.  After that, who knows? 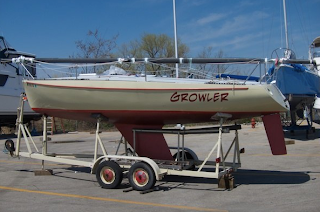 And speaking of dramscombes,  Curt, sailing his Drascombe Coaster, has arrived in Ocracoke this evening.  I love Ocracoke and look forward to sailing there someday (soon??).  Congratulations, Curt, on making it out to Silver Lake. 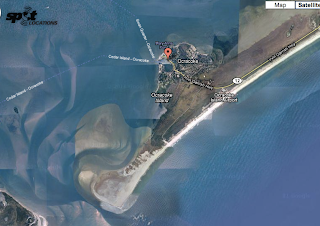 Today's sail will be my last daysail before the Chesapeake Bay trip.  I've got lots of little jobs to do, they will keep me busy through next weekend.  Bruce, see you soon.

Interesting bit of synchronicity there - one of the crewmembers of Opal posted a message on the Wooden Boat Forum three weeks ago, saying basically, "Hey, we're going to be coming over to the Chesapeake Bay soon - we'll be clearing in Norfolk and then sailing all the way up the Bay to the C&D canal. Can you tell me some interesting local sights we should see and places we should visit while we're there?"

And then I come here and see a photo of Opal in Norfolk harbor!

He just posted a little earlier today to say that they are anchored in Fishing Bay, on the Piankatank River and tomorrow they will be sailing north up to Mill Creek (which is just below the Great Wicomoco, near Reedville).

Neat to see the boat here. She look like a pretty sweet vessel.

I said hello to Danish sail-ship Opal and her crew in Hoboken NJ on Tuesday (May 24) while kayaking the NY harbor. Great looking ship with at least 15 toothbrushes lined up on deck! (I presume crew is same size...)