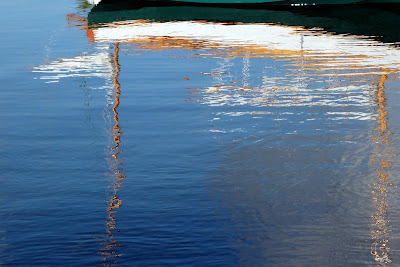 Wind was little more than a wish yesterday.  But I knew that before driving down to the ramp on the Elizabeth River.  Light winds, blue skies and comfortable temperatures.  Hey, it beats doing yard work.

At the ramp I intentionally took my time rigging Spartina, checking the lines and their knots more closely than usual.  I surprised myself when the more deliberate rigging took exactly the same time as the usual rigging.  Backed down the ramp and had Spartina in the glassy calm water by 8 a.m. 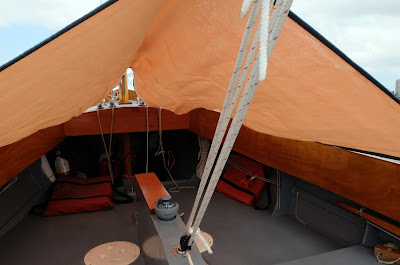 I rode what breeze I could, the tide carrying us more than the wind.  Around 10:00 I anchored in Craford Bay, set up the sun shade, which is really designed as a sand mat but works wonderfully as a shade, and drifted off into a peaceful sleep. 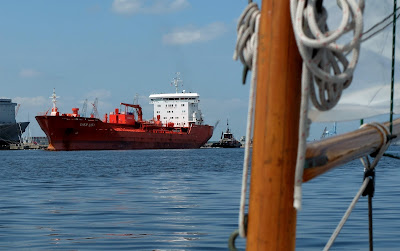 By noon there was there was enough of a breeze to keep a course and tacked down the river for a couple of hours, sharing the river with tugs, freighters and barges.  For a day with no wind, I spent more time on the water than I expected. 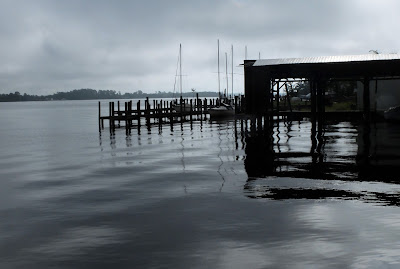 Late last night I started thinking about the dock on the Pasquotank River in Elizabeth City which I will use for an hour or so as I launch Spartina and park the jeep/trailer before starting the fall sail.   I had looked at the dock a few weeks ago, but for some reason never bothered to check the water depth.  (The dock is not the one in the photograph above, it is about a mile downriver and had no boats tied alongside when I last visited.)  Maybe there was a reason for no boats.  I thought of calling my friend down there and asking her to check, but with an excellent forecast decided we could find out for ourselves.

On the road a little after 8 a.m., we made the 45 minute, 45 mile drive to Elizabeth City in a light fog.  I launched at the ramp, which is a much better ramp than the one I use in Norfolk.  It was so much nicer it threw me off my routine.  I attempted to motor away from the dock only to find that Spartina would not respond as I pushed the tiller to one side or the other.  Confused and embarrassed while a nice gentlemen held me alongside his boat, I finally concluded the tiller would be more effective if I lowered the rudder blade into the water.  D'oh! 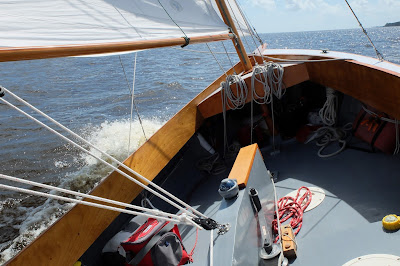 Out on the river I headed to the dock, tied alongside and with the boat hook found there was nearly four and one-half feet of water all around the dock.  That worry off my mind, I raised sail and rode with wind at five-plus knots towards Albemarle Sound.  It was wonderful.  I had expected to be out an hour or two, I was out almost five hours.  A starboard tack downriver, a port tack back upriver.

I had sailed the Pasquotank routinely in the late 80's in the original Spartina.  Over the years I had forgotten about the wooded shorelines, the dark brown water stained by the tannins in the nearby swamps and the steady wind that always seemed to blow across the river.  I think I will do more day sailing down there this fall, the extra thirty minutes of driving being well worth it. 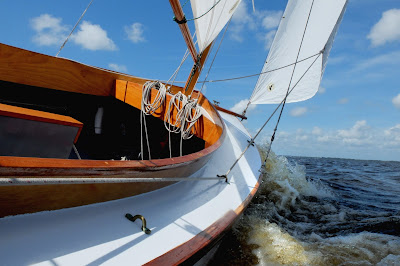 I hope I will have this same kind of wind when I set off in a few weeks for Cape Lookout.