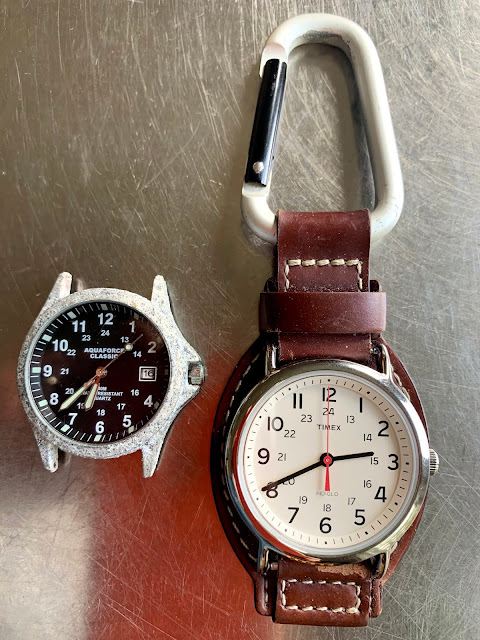 I've got a new watch for SPARTINA to replace the one that failed on the last trip.  Average life span for a watch on the boat is about two years.  This one, like all the others is water resistant to 100 feet.  And like the others, this one is set for daylight savings time and will stay that way for the duration. 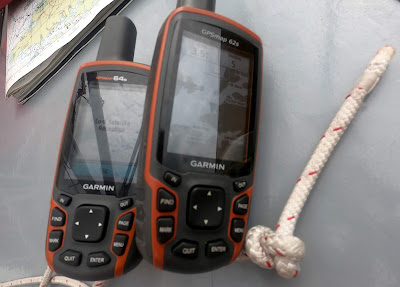 As for the Garmin GPS 64s, I continued having problems with it for the remainder of the trip.  I used the old 62s as a backup and that seemed to work fine.  I have had a couple long "chat" sessions on the computer with Garmin.  At first they said the problems I encountered were my fault, I had not upgraded the operating system.  So I upgraded from 5.0 to 5.5 (or something like that), went out in the backyard and found I still could not lock on the satellites.  At that point they admitted that they were getting a lot of calls from 64s owners with the same problem (couldn't they have told me that at the beginning???).  The work around to is set the device to GPS only instead of GPS+GLONASS.  So what is GLONASS?  The answer from the all-knowing internet is below.  I have not field tested yet with GPS only.  Garmin says they will get back to me when their engineers solve the problem.

GLONASS, or "GLObal NAvigation Satellite System", is a space-based satellite navigation system operating as part of a radionavigation-satellite service. It provides an alternative to GPS and is the second navigational system in operation with global coverage and of comparable precision.

Glonass is the Russian counterpart to GPS

Thanks, Ken. I'll be interesting to see if Garmin can get them both working on the 64s. steve

Probably has something to do with the Ford leaving port....blame it on the Navy :)