I remember this moray eel.  It was tucked down in a crevice beneath the underwater arch at Pyramid Cove at the south end of San Clemente Island.  I found it the first dive of the morning, maybe 40 or 50 feet down.  Surrounded by shrimp and secure in his hideout, he watched me while I photographed him.
This was back in 1977.  I was in college trying to figure out what to do with my life, working at the great old scuba shop called The Diving Locker on Grand Avenue in Pacific Beach (that's where I first met Bruce).  Life was good.  I was either in class, working at the shop or out diving in the waters off of southern California.  I was living at home and driving an old '64 VW bus that was perfect for hauling diving gear to the beaches or docks.  Lots of fun, not much in the way of responsibilities.
That's when I first started taking pictures - when I was diving (it took me a few years to figure out the cameras worked out of water too.)  For fun I would send the photographs off to magazines or book publishers, hoping to make a few bucks to buy a few more rolls of film or maybe a new lens.  And somehow this eel from Pyramid Cove ended up on a magazine cover. 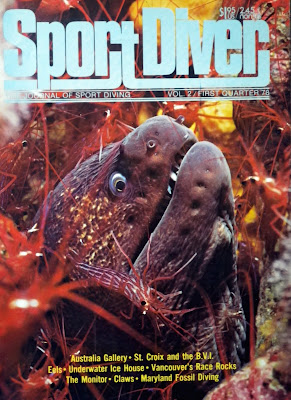 Those days of diving in the kelp beds of San Clemente, Catalina and Santa Cruz Island came back to me as I read reviews of T. C. Boyle's new novel When the Killing's Done.  The book, which has gotten great reviews, is described as a environmental drama revolving around the Channel Islands off the coast of California.  To quote the NY Times....
“When the Killing’s Done” is an impassioned portrait of a real place, the Channel Islands of California, where human strategies of exploitation and protection have run every course conceivable."
"This is a smart and rollicking novel, with suspense and shipwrecks galore, in which no character ever quite understands the stakes and no challenge is perfectly answered." 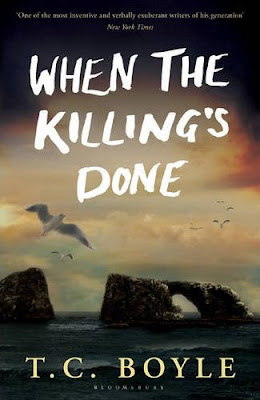 I have never read one of Boyle's novels though I have heard of him for years.  I've picked up a few of his books and flipped through the pages - East is East and The Tortilla Curtain come to mind - but I've never bought one.  Until now that is.  After reading three great reviews of this book I downloaded the kindle version to my droid (I've really started to enjoy reading books on that small screen).  I'll start reading it as soon as I finish Webb Chiles' The Fifth Circle, the passage log, another kindle book (right now we're in the Indian Ocean aboard the Hawke of Tuonela, about a thousand miles from Durban.)

I can't wait to start reading in Boyle's book about the Channel Island.  In the late 1970's I had the chance to dive around just about every one of those islands from San Clemente in the south to San Miguel up North.  Sometimes it was a day trip to an island and back, sometimes we would be out there for four or five days.  I remember the thick kelp forests, sandy coves and rocky shorelines covered with sea lion colonies.  After a couple of morning dives at Santa Clara Island we sat up on the deck in the warm sunshine and watched the fins of small blue sharks slice gently across the surface of the water.  On a trip out to the sea mounds - the Tanner and Cortez Banks - we saw huge schools of pilot whales.  On the lee side of San Clemente sea turtles swam on the edges of the kelp beds while lobsters and abalone hid in the reefs.  That was a special time for me. 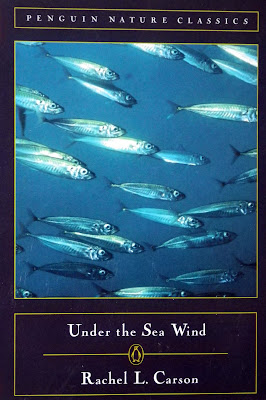 Memories are just about all I have from those days.  I haven't been diving in years and I sold all my old underwater cameras to help pay for rebuilding the first Spartina and a new outboard.  Even the chromes I shot back then - ektachrome and kodachrome - have faded.  There is an envelope with a couple of old clippings like the magazine cover and an image of shiny fish that found its way on to the cover of a Rachel Carson book.  But that's about it.
Memories are fine with me, especially ones that have stayed vivid in my mind for over three decades.  And I have no doubt those memories will be even richer when I read this new book.
steve
Posted by Steve at 10:15 AM

I remember that cover! That's a beautiful shot. I was living in Venice (the one on the left coast) at the time.

Like you, I've pretty much hung up my tanks, and I never made a decent underwater photograph, although I played with a Calypso some in the '60s. Still keep a mask, snorkel and fins around though.

And thanks for the pointer to T.C. Boyle's new book. I'll check it out.

thanks for remembering the cover. That was a long, long time ago.
Are you in the EC this year?

No EC for me this year. Until early February, I was planning to manage a checkpoint, but then work got in the way.