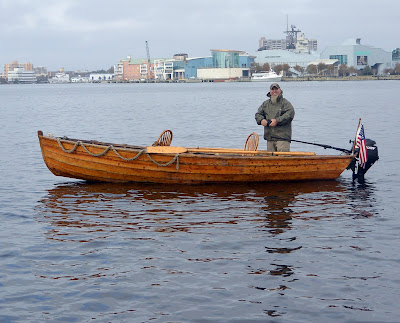 The title for this post was the opening exchange as we passed each other where the Elizabeth River turns a corner to the southern branch.  It was a brief meeting with him telling me he built his New Jersey Sea Bright Skiff a dozen years ago, and I telling him that I built the Welsford yawl a decade ago.  He said he has never crossed paths with another home built wooden boat.  I said not just wooden boats meeting, but both built with lapstrake construction, a rarity for this area.  Yeah, he said, most guys take the easy way out.  We both smiled.  Then he went on his way, I went on mine.
Posted by Steve at 4:18 PM