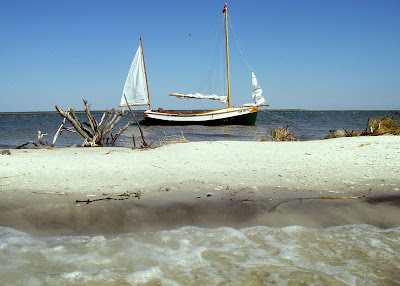 That is Spartina anchored behind an islet just inside the R"2" marker leading in to the Long Shoal River.  Just to the northeast is Pains Bay.  I was reminded of Pains Bay the other evening as I was rereading parts of The Boy, Me and The Cat, Cruise of the Mascot, 1912-1913 by Henry M. Plummer.  Henry, the "me" of the title, his son Henry jr, the "boy" of the title, sailed a 24' 6" Cape Cod catboat from New Bedford, Mass to Miami, Fla. and back in just of eight months.  They sailed "inside" most of the way, including Long Island Sound and Chesapeake Bay, but went outside in to the Atlantic from Beafort, N.C. to Charleston, S.C.  In the late fall of 1912 they left Chesapeake Bay and entered Hampton Roads, my sailing area.  They followed the Elizabeth River up to Norfolk, then took the southern branch of the Elizabeth to the Chesapeake and Albemarle Canal, passing just a few hundred yards from where I am now sitting.  They continued south through Currituck, Albemarle and Pamlico Sounds, stopping at some fishing villages on the way.  On December 2 they passed Long Shoal Light, eased their sheets and under a freshening breeze made their way to anchorage inside Pains Bay.   You can see the bay, with the tiny island below.

I've sailed some of the same waters they navigated nearly 100 years ago and find myself wondering what it was
like back in those d
ays.  That islet I anchored behind last fall was mostly likely all that remains of a point, now eroded away, that marked the southern edge of Pains Bay.  The Boy, Me and The Cat is a wonderful book and I highly recommend it.  Originally published as a mimeographed hand-stitched book, it was republished by the Catboat Association and is available at their website.
It is superbowl weekend.  Still cold, but at least sunny, outside.  Two more weeks until pitchers and catchers report to training camp.  Time for me to get to work on the boat.  I stopped by West Marine to pick up a spark plug for the outboard - I like to start the season with three new plugs on board - and a type IV pfd throwable cushion.  I've had one, as required by the Coast Guard, but thought it would be nice to have a second one on board.  I also wanted to pick up some Interlux topside paint to touch of the worn areas of Spartina's cockpit, but they did not have the steel grey color in stock.  Hopefully I can find it online, and maybe cheaper that West Marine's $42/quart price tag (ouch!).
I did pick up a few packs of Bumble Bee Tuna Salad with Crackers.  These, along with some cups of fruit, will be our lunches.  Bruce and I continue our discussions on the menu.
I should have some free time tomorrow before the big game so will start tackling the list of things to do.  Here are some of jobs I need to do - no in any particular order - to be ready for the sailing season.
I'm sure I'll find many more things to do between now and the first sail of the year, hopefully in March.  Tomorrow I think I'll start with that tail light.
Posted by Steve at 1:24 PM