A small summer rain shower caught me as I headed to the ramp on the Eastern Branch of the Elizabeth River yesterday. Once I got the boat up in the parking lot I pointed it into the wind and raised the sails to dry them out. I cleaned up the boat and relaxed while the sails flapped in the breeze for about 45 minutes, I wanted them as dry as possible to avoid mildew. And while I was standing there I realized that in exactly a month we should be tied up at Ewell on Smith Island, the first stop of the trip. It is coming up fast. 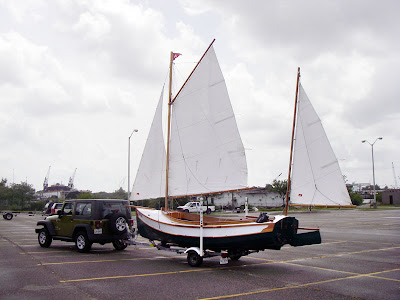 We are still tweaking with the course for the Crab House 150. Or I should say I'm tweaking -- Bruce is hopping on a plane to Africa and will be out of the loop for a while.

One change is that we've decided to bypass Oxford and stop at Tilghman Island instead. 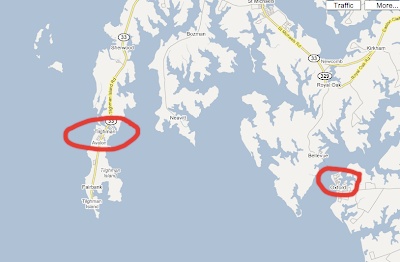 Tilghman Island, and particularly Knapp Narrows - the cut through the southern part of the island, seem more in line with the northbound part of the trip. Plus the logistics weren't working out well in Oxford. The marinas seemed expensive and the marinas, restaurant and hotel were more spread out than I liked. I have heard Oxford is a great place - we'll catch it on a later trip.

So they way it looks right now we'll be staying at The Tilghman Island Inn. Looks like a great place and reasonable too as rooms start at $120 and the marina is right there. Plus we've got a couple of choices for restaurants including The Bridge Restaurant and The Bay Hundred. Sounds like a beer at one and dinner at the other.

With just four weeks left I've got a lot of little jobs to do. Time to start making lists.
steve

Interesting lot sailer you have there:

I've heard of a trailer sailer, but this is ridiculous...
(rimshot)
Sure the gas milage stinks, but it corners great on a reach...
(rimshot)
Is that an anchor in front or are you just glad to see land...
(rimshot)

Thankyou everybody. I'll be here all week, and don't forget to tip your waitress.