If only every day in Chestertown had been like Sunday.  Rich blue skies and a fair wind.  A bit on the cool side but the bright sun shining on white sails makes the day seem warmer.
Sunday was perfect.  I had been hoping for too much when I had imagined every day would be like that.  Each trip out on the water means taking a chance on weather.  Sometimes it works out, sometimes it doesn't.
There is the skipjack Sigsbee spreading her canvas with a full load of passengers aboard for the Sunday morning sail. 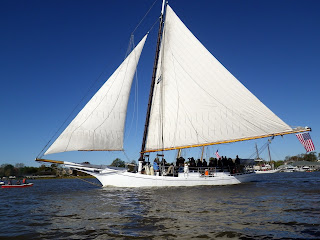 I did have some nice sailing earlier in the trip.  Below is a photo from Friday morning, sailing back in from my anchorage downriver to the marina in Chestertown. 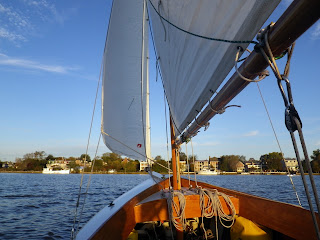 And there are the tall ships tied up along the waterfront.  From left to right you can see the A.J. Meerwald, Lady Maryland, Sultana and the Kalmar Nyckel.  The Pride of Baltimore II is in there also, but she is difficult to pick out. 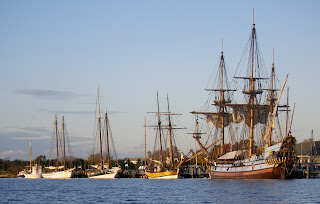 Fall sailing, like Fall colors, can be the best. 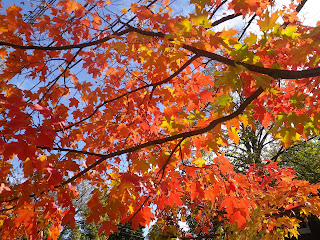 On Friday afternoon I had a two hour sail with grey skies moving in.  I met Brent aboard his Core Sound 20 Active Imagination.  He was spending the weekend exploring the Chester River.  I recognized the boat's design by her classic cat ketch rig.  A beautiful boat that was very well sailed. 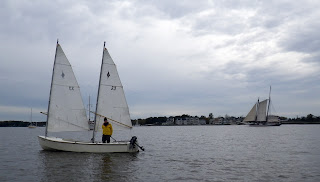 And here is a steel-hulled seagoing boat from Holland.  The owner said he and his girlfriend had sailed in from Bermuda a couple of weeks earlier.  "When did you start your cruise from Holland?" I asked.  Six years earlier was the reply. 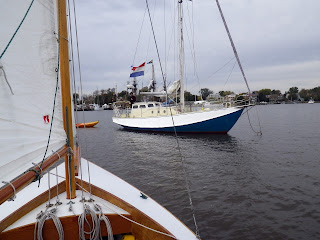 There is the Sultana, the reason for the weekend, setting sail with passengers on board Friday afternoon. 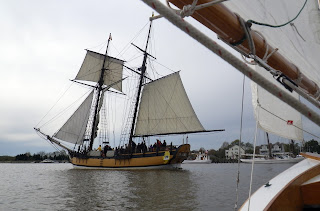 She was followed out by the Kalmar Nyckel. 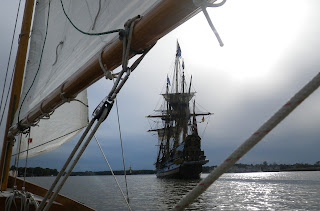 But Sunday was the best.  I was up just after dawn.  I carried a load of gear to the car and met my friend Seth as he was walking down to the dock.  He's mid-build on his own Pathfinder up in the mountains of Virginia.  We had met once before and corresponded quite a bit since.  He hopped on board for an early morning brisk sail.  He had the tiller most of the time, I sat up forward and enjoyed life. 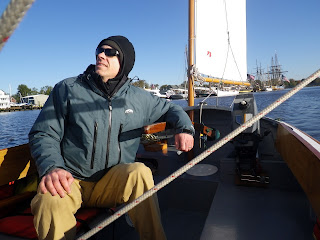 Below is the Howard Blackburn setting sail that morning. 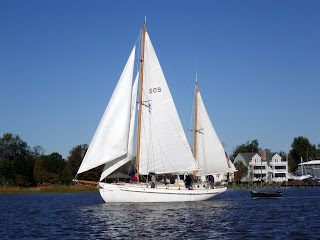 Just as I dropped Seth off at the docks my other friend Bill showed up.  We've been in touch for a while over the internet but had never met in person.  It was good to put a face and a voice to the name.  And of course he jumped on board for a sail.  It was good to see some old friends and make some new ones. 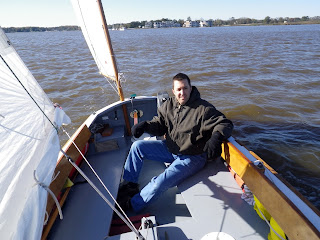 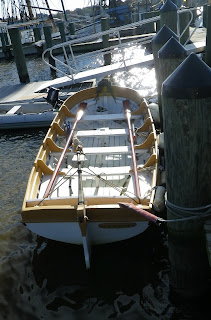 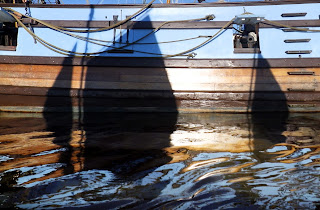 Thanks, Steve. Good job and great photos, especially the last one.

Thank, Steve. I was hoping that last photo would come out. Great to see you again. And now I know a new way to coil lines!

That hour or so on Spartina has only served to seriously fire up my boatbuilding bug. I need to get my Pearson back together and in the water. Then I need to seriously think about the possibility of building a smaller boat.