the nastiest, most miserable body of water.....

a few comments on a sailing anarchy forum discussion......
"In a small vessel it is the most miserable body of water on the planet."
"Many a Delaware Bay transit in my log......STAY AWAY"
"Which crappy, square, brown, 4-6ft wave would you like today ?"
"I've been in hurricanes and Gulf Stream storms, but the outright nastiest sail I ever did was a beat from the C&D to Cape May." 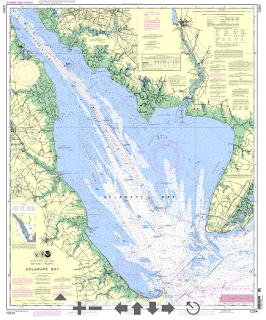 They are all talking about Delaware Bay.  Sounds like fun, doesn't it?  Bruce and I have started researching the bay as we plan our Fall cruise.  That sail will be our over the top sail of the Delmarva circumnavigation.  We'll start somewhere mid-Chesapeake Bay, go up to the Chesapeake and Delaware Canal, then sail down Delaware Bay to somewhere around Lewes, Del. or Ocean City, Maryland.  We've got a skype session scheduled in the next couple of weeks so we can talk about our plans. 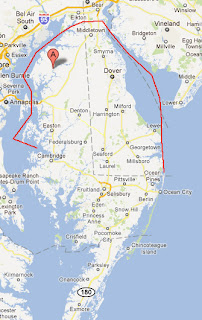 Much of the research we need to do on Delaware Bay has already been done for us by my friend Barry who transited both the C and D Canal and Delaware Bay just a few weeks ago.  Barry shows that the Delaware is a bay that is wide open to the full of the energy of the ocean.  Take all that energy and combine it with the wakes from enormous commercial ships, crosswinds and strong tides -- the bay ends up being a very uncomfortable body of water.  You can read Barry's detailed description of the bay, along with his interesting adventure on a schooner that lost power in the shipping channel at night, in his post called Danger on the Delaware.  Enjoy! 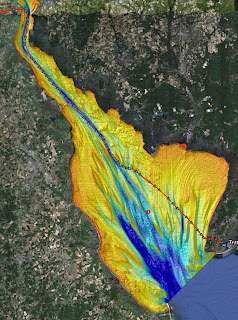 Barry also showed this topographic image.  It looks to me, at best, uninviting, and, at worst, just plain scary.  It is obvious how the waves come up from the Atlantic and funnel from the wide mouth into the narrow bay.  I can just see the waves criss crossing the bay in a confused mess.

Reading all this was not fun, but one of the things I kept in mind - and Barry mentioned the very same thought in an email - is that much of what we are reading about Delaware Bay comes from keel boats that need to stay in the shipping channel that runs up the middle of the bay.  Could the bay be a little bit different for a small boat with a centerboard that could skirt along the edges of the bay, either the Delaware coast to the south or the New Jersey shore to the north?  While thinking about this I realized that I had three descriptions of small boat sailing on the bay right here on my bookshelf. 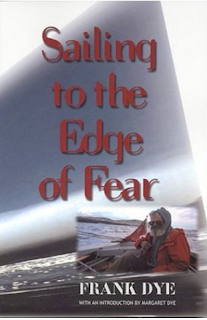 I found my copy of Frank Dye's Sailing to the Edge of Fear, his book about sailing up the east coast in a 15' 10" Wayfarer Dinghy.  Here are some of his comments.....
"As soon as I enter Delaware Bay from the C & D Canal I feel happy as it has a difficult and more challenging feel, much like the North Sea and it is pleasant to work the tides, instead of the softer and easier Chesapeake Bay.  Certainly for a Wayfarer dinghy with only an eight inch draft, it is a fine cruising ground with many secretive little creeks invisible until almost aground in the marsh."
Okay, so more challenging than Chesapeake Bay, yet suitable for a small boat.  From dates in his book it appears that he took two days to sail down the bay.  He did not have an outboard on his boat. 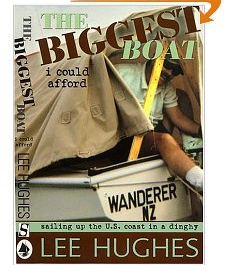 Then there is a description by Lee Hughes in his book The Biggest Boat I Could Afford.  Hughes was sailing the same boat as Dye - not just the same design but literally the same boat which he bought from Dye.  Hughes did add an outboard for his trip.
He talks about a thick fog for much of the day, motoring along with the tide at eight knots past freighters making their way upstream.  He anchors at the end of the day in a little creek only to find that the rushing tide will leave him on the muddy creek bottom.  Then has problems trying to motor out of the creek.  The next morning, again in a thick fog, he motors to Cape May.
Hughes ran the length of the Bay also in two days, dealing with thick fog much of the time.  His trip was in the Spring, ours will be in the Fall.  He, like Dye, sailed closer to the Jersey Shore.  And just about all of his trip was made with the outboard. 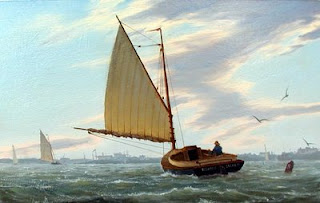 And finally there is the description by Washington Tuttle who sailed a catboat around the Delmarva Peninsula.  I have written about him before and he is, in fact, the inspiration for our own circumnavigation.  He says...
"I lucked into a helping tide and was soon into the Delaware.  Soon a giant cargo ship came up the Bay and I moved a hundred yards away so as not to threaten him.  My centerboard touched the bottom.  No wonder the water can be rough in the Delaware.  There were threatening clouds over the Jersey Shore so I kept a sharp lookout for inlets.  The sun and the breeze were strong.  I found an inlet in the marsh."
Tut did the trip, like Dye and Hughes, in two days, though he went along the Delaware shore.  His trip was in late August or early September.  I can well imagine seeing threatening clouds that time of year.  But his trip, like Dye's and Hughes, worked out just fine.
So what to make of all this?  It sounds like it could be a different kind of sailing, maybe even a little adventure.  Plan on two days for that part of the journey, maybe throw in a third day in case of bad weather.  I think we can do it.  We need to look into both the Jersey and Delaware Shore's, being ready to go either route depending on weather.  And if we take the Jersey Shore, then we need to think about crossing the mouth of Delaware Bay to reach Lewes.  But more on all that later.  This, for the purposes of our research, is a start.
Thanks very much to Barry, Frank Dye, Lee Hughes and Washington Tuttle for sharing their experiences.  It is much appreciated.
steve
Posted by Steve at 10:58 PM

This Jersey Shore that you speak of is far and away different from the better known 'Jersey Shore' on the Atlantic coastline. The Delaware Bay sounds really challenging, and with your shallow draft you should be able, if necessary, to choose either the Delaware or Jersey side to seek shelter or flatter water.

I was raised on the Dela.Bay. I've run it in a canoe and numerous times in 16-ft. Comet, so it's navigable by small boat--BUT! It's listed as one of the three most dangerous bodies of water in the US. You'll need much more pilotage than you're accustomed to in the Chesapeake. There are shoals where a shoal draft boat can run abround nearly out of sight of land, wrecks just below the surface, oyster banks, and plenty of current. I'd avoid it at night for the first run, just as a suggestion. I've pulled people from the water after their boats have flipped, and I read the account of a world circumnavigtion where the couple said the bay produced the worst seas they experienced anywhere. There's a lot of heavy commercial traffic that requires your attention, and it doesn't all run in the channel. On some days it can be calm, even beautiful, but it just demands attention and respect. When it's behind you, you can count it as a great new experience.

I sail the upper Delaware Bay quite a bit in Thistles and Flying Scots and it can get really hairy really fast. Some of the other members in my club have sailed the length of it in small boats as well, and their comments are essentially the same.

The upshot is that there is a lot less motorboat wake to deal with since people generally stay away. Being used to it, I always thought it had to do with the fact that there really aren't any places to pull in on the way for a beer.

My only other thought is to reiterate how important the tides can be not just for making headway but also for the type of water they generate. I've seen the bay go from glass to washing machine in minutes.

Ship wakes have not been a huge deal for me in the past but I'm paranoid even in the best conditions. Its best to stay well clear. Also, there is a man made jetty that runs down the middle of the river south of New Castle that can be easy to miss if you're not paying attention.


I think you may be on to something about using a smaller centerboard boat as opposed to a keel boat. There are a lot of shallows on either side of the main channel. You should be aware that many times tugboats hauling barges will use them as well during high tides and I'm not always convinced they're looking out for me ;-)

Anyway, I think your plans are really cool and I wish you the best of luck, wind and tide.

Thanks guys, I appreciate the local knowledge - I can't tell you how much I value it. We'll spend a lot of time looking at the charts and tide tables before the trip. Steve

Here are a couple more.

De Gast ("Western Wind, Eastern Shore") and Schindler ("Between Two Bays and the Sea") both talk about the strength of the tidal currents and the extensive shoals but they had very different trips between the C&D and Lewes. Upon reaching Lewes, Schindler remarked, "I found the Delaware not a bad bay to sail. I expected much worse and kept looking for it. It was only at the mouth when I was bucking the tide and heavy winds, that I realized the Delaware wash showing me her ugly teeth." Schindler made 2 stops between the C&D and Lewes.

On the other hand De Gast who only made one stop, said upon reaching Lewes after battling 25 knot winds and steep six-foot waves, "I had never, in such a small boat, sailed as long and as uncomfortably as I had that long afternoon."