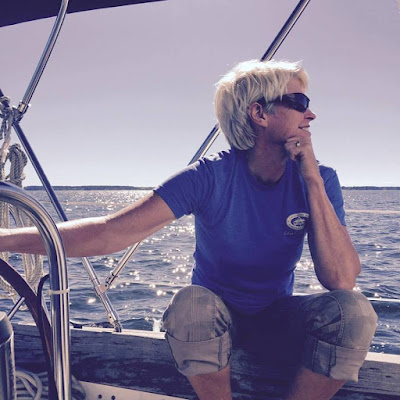 I just love this photograph of Kristen at the helm of her Cape Dory.  I heard heard rumors of her having a sailboat while I was at the Mid-Atlantic Small Craft Festival but never found time to ask her about it.  Kristen looks so content in the photograph that it seems she is exactly where she is meant to be, and by "where she is meant to be" I'm not even sure if I mean at the helm of a keeler (as she calls them), sailing the waters of Chesapeake Bay or running the Chesapeake Bay Maritime Museum.  Probably all three. 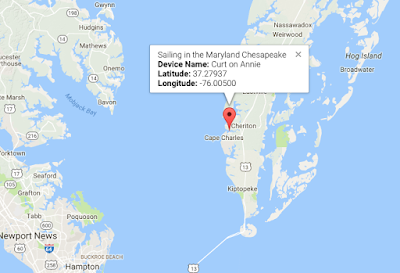 Curt is on a what appears to be a great adventure on his Drascombe Longboat Cruiser "Annie."  He put in sometime last week on Mobjack Bay and explored that area a bit, then crossed Chesapeake Bay to Cape for a visit.  Weather has been excellent the last few days and I hope he is having a great sail. 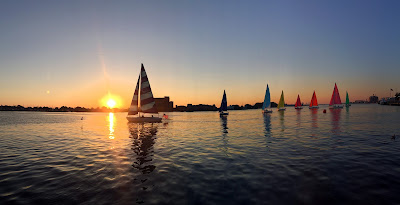 I went through a busy phase of work on returning from the fall sail, working some day shifts and some night shifts, and spending a little on the road down to Hatteras Island.  The reward was a three-day weekend with spectacular weather.  Had I known Curt was going to cross the bay I might have trailered over to the Eastern Shore to Cape Charles with a couple of cold pints to deliver to Annie and her crew.  Instead I had Spartina tied up on the Elizabeth River for three wonderful days of sailing, including the better part of Sunday on the water before joining the Pilgrim at the Town Point Wine Festival.  It was a busy weekend on the river with the tall ships from the Great Chesapeake Bay Schooner Race arriving and departing, and a steady stream of snow birds heading south on their cruisers for the winter.  I did some early morning sailing plus some evening sailing, and at one point found Spartina to be the sole member of the spectator fleet as my Sail Nauticus friends held their sunset regatta.

Fall - what a great time to be out on the water.