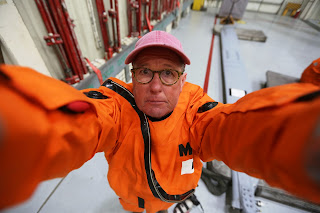 Got a call late Thursday afternoon with an invite to visit an aircraft carrier operating off the Virginia capes.  Sounded good to me.  Out at the base yesterday before 6 a.m. to catch a ride to the helicopter squadron hangar.  This time of year the ocean is cold so that means wearing an exposure suit for the flight.  It's been a while since I have made a cold-season flight and back then it meant wearing what was less-than-affectionately known as a gumby suit.  That was a very loose fitting neoprene survival suit that left one looking like, well, Gumby.  This time we were issued what seemed to be brand new drysuit, a military version very similar to the Stohlquist AMP drysuit I've been looking at.

Not the easiest thing to put on the first time around, I needed help.  Second time around, for the flight home, it went on very easily.  It was comfortable and lightweight.  I was issued a large, the only size they had, though from the Stohlquist size chart I would wear a medium, yet the suit seemed to work just fine.  And the universal-fit booties, something I had concerns about with the AMP, fit very well.  It was a good test drive for a drysuit.  The Stohlquist suit, layered over good thermals, seems like it would be perfect for winter sailing.  I'll try to fit it in next year's budget. 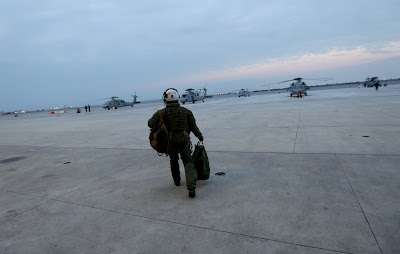 As for the day with the Navy, it was a treat.  That's our crew chief, above, leading the way out to the helicopter.  Nice guy, very professional, very friendly.  Depending on the mission, he told me, he can serve as a crew chief, a door gunner or a rescue swimmer.  Got to feel safe with someone like that leading the way. 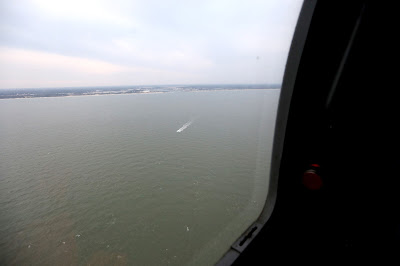 We took off and headed out over Willoughby Spit, Ocean View, Cape Henry and then out over the Atlantic. 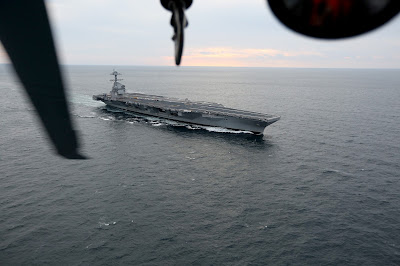 The destination was the Gerald R. Ford, our newest aircraft carrier, about 80 miles offshore.  She was out for a couple weeks of training and testing, just having been commissioned last July.  It will be about four more years of work before she is ready to deploy.  The amazing thing about aircraft carriers - we're talking floating nuclear reactors that catch fighters jets and catapult them back into the air - is that the crew is made up of men and women with an average age of 21.  A lot of them are kids.  But very well trained kids.  Then were just wonderful people to be around. 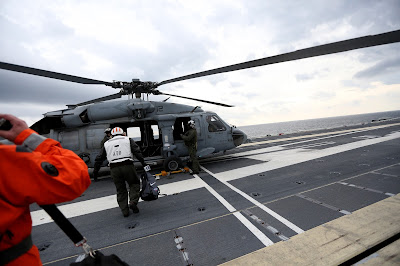 It was just a short visit, then time to put on the drysuit a second time (much, much easier) then the flight back home.  Nice way to spend a day.

Cool story Steve. Was this a business trip for you? What sort of work do you do?