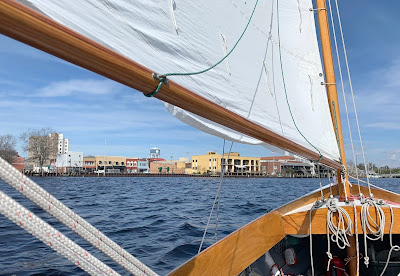 The title of this post was used to describe me at the waterfront in Elizabeth City yesterday.  "Ignorant," yeah, ok, I can kinda see that.  "Bastard," I think not.  The description came from a man who hangs around the boat ramp and felt I needed both is advice and assistance in launching SPARTINA.  It was an easy launch but getting the yawl from the ramp around the corner, backing it into the wind, chop and current, took some effort.  This man had involved himself, uninvited, in my launchings a couple of times over the past year or two, mostly by shouting instructions but also by giving the boat a shove, whether it was needed it or not.  He doesn't seem to pick up on subtle hints in phrases such as "thanks, but I'm fine," "I've got this," or "I can handle this."  Yesterday moving SPARTINA around the corner involved some concentration, muscle and adjustments to the bow and stern lines.  All the while they guy is yelling at me, telling me what I'm doing wrong and how I need to do what he says.  I tuned him out enough to get the boat tied up.  But then he comes up on the dock and makes a move as if to grab the bow line.  I had had enough.  I said "Look, buddy, you've done this to me a couple of times now.  You distract me, confuse me and get in the way, and I don't need it."  Before I was finished he was halfway back to his pickup truck, cursing me all the way.  His final comment was "Why don't you go back to Virginia, you ignorant bastard!"

I did go back to Virginia, but only after a pleasant sail on the Pasquotank River.  (Driving home I recalled a recent entry in Webb's journal, which I will add at the bottom of this post.) 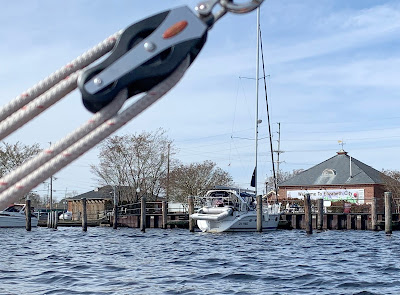 I did see what appeared to be a snowbird tied up at the docks, the first I have come across this year.  It is a bit early (and still chilly).  The full migration of cruisers should begin in mid-April. 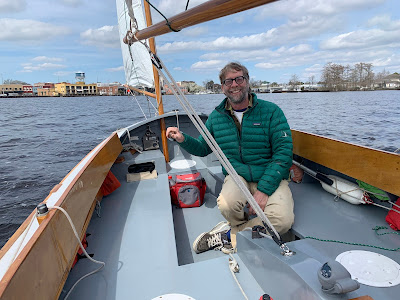 Halfway through the sail I heard a shout from the docks.  It was Scoot, my surfing, sailing friend from Hatteras Island.  He was on the waterfront working on his father-in-law's sloop Mary B.  He hopped on for a sail.

A man, perhaps in his forties or early fifties, came up to me and asked if GANNET is my boat.  I said she is.  He said, “Have you brought her here to race locally?”  I replied no, that I was nearing the end of a circumnavigation with her.
He said he was circumnavigating too.  Solo.  He stressed the ‘solo’.
I asked what boat.
He said he has a Valiant 40 and started in San Francisco.
He asked my name.
I told him.
He shook my hand harder than is customary, perhaps proving something to somebody, and then said, “I am sorry you are an American.  You are an arrogant bastard.”  And walked away.

Which is better?  Ignorant or arrogant?

Something I notice more and more these days, people just don't mind their own business. I'm afraid it's a vanishing trait..

Happens all the time. You're having a nice day and then ... people happen.

You are more patient and tolerant than I am. I'm afraid I would have told him f*&! off and mind his own damn business.

It does seem that about half the human race seems intent on telling the other half what they should do.

For the record, I am not opposed to assistance when needed. I have been offered help and accepted with appreciation. At times I have asked for help and received it with kindness. But then again, when I don't need help, I don't need help. Oh well, it was a fine sail regardless. steve

Sunday was indeed a beautiful day, and glad you had a fine sail - despite the idiots. As an "adopted" North Carolinian, I'm happy to see Virginians visiting anytime. South Carolinians, on the other hand.... ;-)

I call them Ramp Rangers. We had one tell us that roller reefing was asinine on our Lugger one day :) Whereas Webb considers it essential on a small boat. We'll go with Webb.

Glad you had a nice sail!

Kents, that is a great name for the know-it-alls on the waterfront. I'll remember that one. Hints of spring up here. Maybe I'll sail without the mango suit soon.