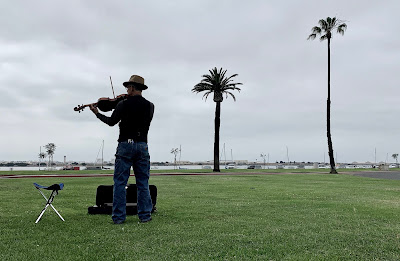 I made a brief visit to Southern California this past week.  A pre-dawn flight out, a couple of train rides along the coast and then a red-eye flight back home. 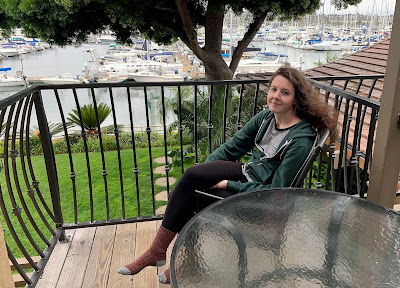 Grace, the youngest daughter, co-builder of SPARTINA and a member of the original crew, was the reason for the trip.  We spent a couple of days in LA, where she lives, then a couple in San Diego (much slower-paced than LA).  Very relaxing and enjoyable. 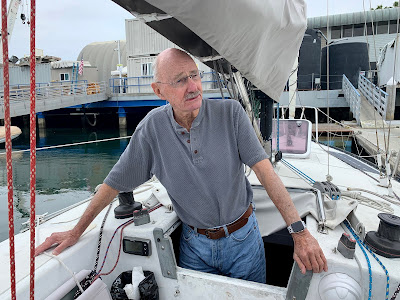 An added bonus was seeing Webb, with GANNET tied up at a marina that was an easy walking distance from our hotel.  We saw Webb twice, once for dinner and again the following day for a brief visit.  The next morning, on the way to breakfast I saw GANNET heading out of San Diego Bay on her way to nearby Mission Bay.  You can read Webb's description of the circumnavigation's final sail here.

My first mission after arriving in San Diego was a visit to West Marine where I dropped off an order for new lines for SPARTINA.  The original lines were 12+ years old and showing signs of wear. 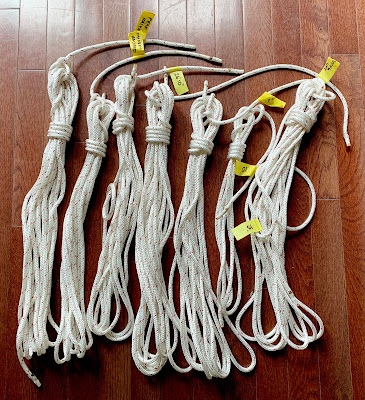 Ian, the rigger at West Marine, was off the day I put in the order.  And he was out to lunch when we picked up the lines a couple of days later, so I never met him and did not get the chance to thank him for his fine work whipping each of the lines.  He did an excellent job. 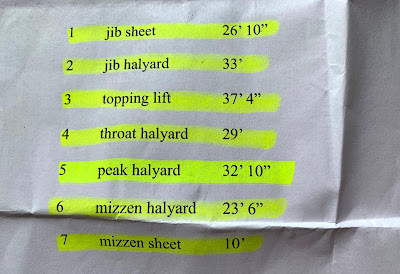 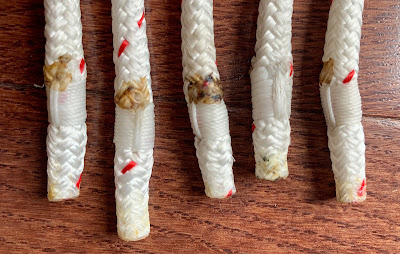 The new lines are now on SPARTINA.  The forecast is good and I hope to have her on the river all week for some morning and maybe evening sails.
Posted by Steve at 8:55 AM

Nice lines. Nice whippings indeed... what are the brown marks?

Marks from the hot knife used to burn the line and whipping.

I’ve never seen whipping so far from the end of the lines. Why? Whipping is supposed to prevent the ends from fraying, which it looks like the lines can still do.

I had the same guys whip the end of the main sheet about five or six years ago, same technique. It is still in perfect shape. Not an expert on this, but it seems to work pretty well. steve