I found on the spring sail that some of my gear is getting old.  A lot of it has been in use for a decade now so it is worth updating for the fall trip. 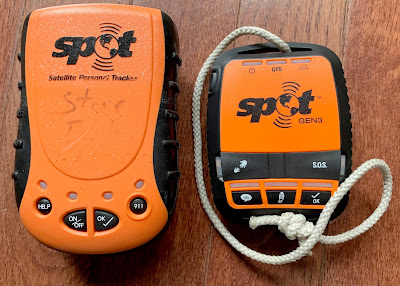 SPOT was offering what seemed to me to be a really good deal.  With credits on both the SPOT Gen3 and a year's service, I was able to get the new tracking device and a year's service for less that the annual service fee coming due in July for the original device, left above.  The folks at SPOT were not happy when I called in to cancel the service contract on the original device, they said the sale was based on the idea of SPOT users having a second active device and it was expected that I would continue both contracts.  I only need one device, much to their displeasure.  Advantages of the new SPOT are that the user interface (ie buttons) are easier to use, it is smaller and it seems to be more accurate with the gps locations. 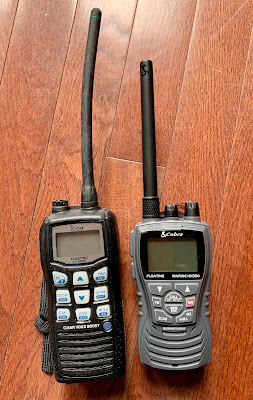 My old radio, left above, which I use mostly for weather reports and the occasional bridge opening, began losing the broadcast signal on the last trip.  Sometimes I would have to hold it at a certain angle to be able to get the weather.  I replaced it with a Cobra Marine HH350, which is lighter and a little smaller.  It had good reviews,  I hope it is a good radio.  I'll tuck the old radio away in a dry bag as an emergency backup. 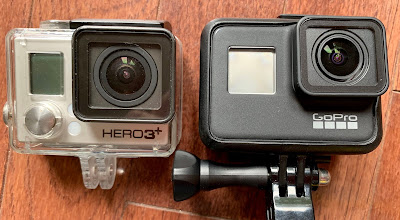 And because of another good deal ($100 credit on any digital camera working or not sent to GoPro) I upgraded from my Hero 3+ to a Hero 7+.  I've done just a little testing with the new GoPro but so far it appears to be an amazing camera.  It will shoot "linear" images (as opposed to the traditional "curved" GoPro images, it responds incredibly well to voice commands (we'll have to see how that works on a breezy day) and the video is extremely high quality with built in stabilization.  I don't shoot that much video as of now, maybe that will change.  The old camera I sent it for the discount was a non-working Pentax Optio, so I 've still got the old GoPro as a backup or even a second camera.