An unexpected taste of fall arrived this past week.  The fruits of one of our fig trees began to ripen.  These are known to me only as "mystery figs."  I bought this tree in the fall of 2003 just a few weeks after Hurricane Isabel.  The nursery, which was located down in the swampy area near the North Carolina state line and specialized in fruit trees, had lost all the markings on their young trees to Isabel's winds.  Growing five or six types of figs at the time (the couple that ran the nursery has since retired and closed the nursery), they no longer knew which was which.  All the trees were marked as "mystery figs" and sold at a discount. 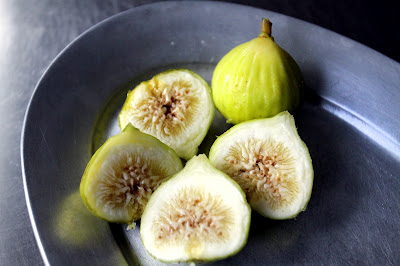 We have three fig trees in our yard.  The celeste fig tree produces the smallest fruit with dark red, rich flesh.  The golden honey fig tree has always been the most productive, growing a slightly larger fruit with white flesh.  And the mystery fig, which produces the largest fruits, has until this year been the least productive.  This season, maybe because of the mild winter and hot, rainy summer, all three trees are loaded with figs.

Ripening from mid-August to early September, the figs are for me a harbinger of the coming fall.  The mystery fig, though, is living up to its name and ripening now.  Fine by me.  In the heat and humidity of summer it is a nice reminder of the coming cool fronts from the north. 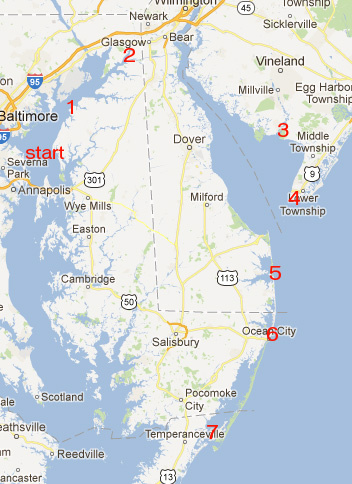 Above is a map based on the discussion I had with Bruce the other evening.  It shows our starting point and possible anchorages.  The end point of the trip will be determined by weather.  The places marked are....


We are a little less than two months out from the trip, time to start thinking about food supplies.  Bruce, what's for dinner?

It would be neat to meet up with you in one of the two NJ ports. Keep us up to date of when you sail!

Will do, Baydog. The first stop, Maurice River Bay, will most likely be an anchorage and we won't set foot on land. We will, if winds cooperate, visit Cape May. I'll keep you posted and of course there will be a tracking map. And I'll buy the first round of beers.

Steve -- I'm watching this with great interest, as you know. Especially nights 5-7 inside the barrier islands. Love the pre-planning!