That is the forecast for today and tomorrow.  Temperatures 100 degrees or more, wind less 10 mph (though one forecast shows wind up to 11 mph).  I've got to work today, but I'm off tomorrow and will spend my time catching up around the house on a hot, windless day.  Maybe I will sail on Monday. 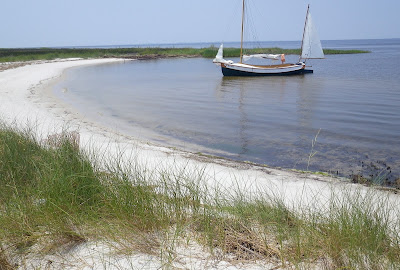 Above is a photograph I made on the last trip at a little beach on the Pamlico River.  It was a day that had excellent wind all morning, and then excellent wind again starting mid-afternoon.  In the middle of the day, however, the wind died while the temperature climbed to the high 90's.  Instead of drifting and baking out on the water, I chose to motor to the nearby beach where I jumped in the water and cooled off.  It was the right thing to do.

Work continues to be very busy and I have not been able to focus on my daily log as much as I want to.  Things seems to have settled down and I should be able to give the log the attention it deserves.

I was a very social sailor on the fourth of July.

I went out for what was planned to be a solo sail on the Elizabeth River.  Sailing down near the Schooner Virginia I saw friends Erik and Whitney walking along the pier.  Erik is the captain of the schooner, Whitney is a deckhand.  I sailed towards them as they walked down the pier towards me.  Soon they were on board Spartina for a nice morning sail.  Erik is a licensed captain and it was the first time Spartina was sailed by a captain.  It was a very nice morning.

After dropping them off I sailed over to Crawford Bay and exchanged greeting with Ken aboard the 41' ketch Scallywag.  Soon he was on board for a short sail.  Ken is also a licensed captain, making him the second captain aboard Spartina in one day.  Ken and girlfriend Michelle are sailing from Georgia up north, then they will turn around and head south down to the islands and maybe the Panama Canal.  I enjoyed talking with Ken about boats big and small.  I think he enjoyed the sail aboard my small boat.  Soon the wind lightened and we turned back to Scallywag where Michelle had prepared sandwiches for us.  Under the shade of the big bimini we enjoyed lunch and conversation.

It was a nice day on the river.

Great picture of spartina!
I am using it as a desk top picture. Do you have a higher res version for a poster? I'm still working on my sun room walls.
Jim

We were anchored in Manteo last night. It was unbearably hot, then the wind died. At 3 it started raining. Fortunately, the windsock drapped over the hatch and prevented it from raining on the v-berth, but it was impossible to sleep.

We motor sailed home early this morning, leaving the giant awning up, using the yankee and motor. Odd combo but it worked in light wind.

I am loving the a/c right now.

No sailing here in Scotland either, 3mph, 50*F. No sailing weather forecast for next few weeks. Bad summer!