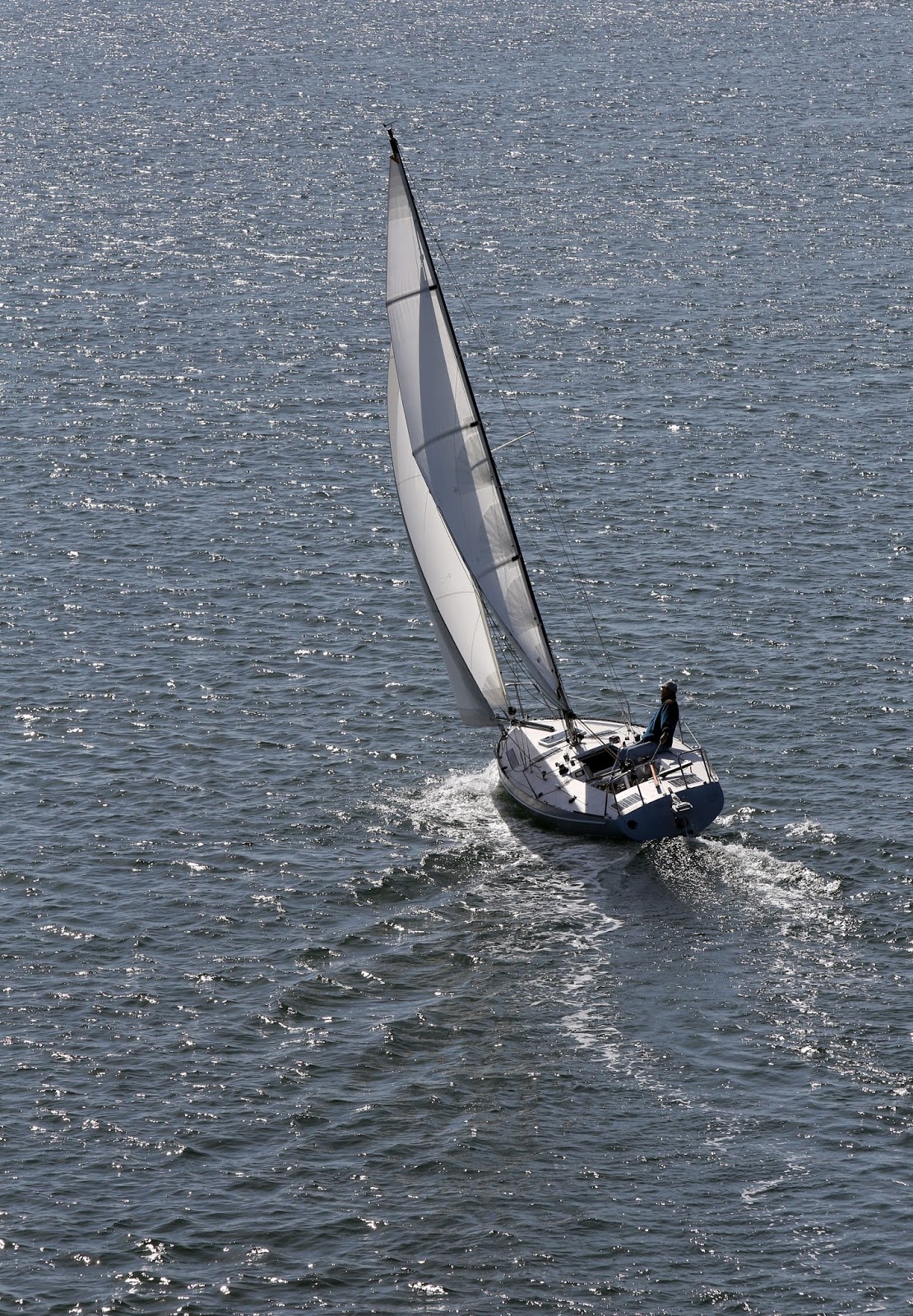 First, an update about Webb Chiles.  If you read his journal you know that he arrived at Hilo, Hawaii on Saturday, June 7.  He has not posted the passage log, but you can read a description of the sail - which includes sailing at 8, 9 and 10 knots, a thousand mile week and a boat, GANNET, that seemed to live up to Webb's expectation of moving like a leaf blown over the water - here.  I wrote a few days ago that he arrived in 17 days.  I now read it was 18 days.  Also, I had mentioned, based on a SOG reading from his Yellow Brick track, that sailing leaving the coast of San Diego was slow going with a speed of 1.7 knots.  Webb describes that reading as a glitch, saying "I was doing 6 and 7 then and left San Diego with unusually good winds."  Not so slow going after all.

I do appreciate Webb sharing his track, I enjoyed following along.  And look forward to following it again when he leaves Hawaii on the next leg of the trip.

I had a few reasons for my short sail yesterday morning.  I wanted to sail on the waterfront with the tall ships at Harborfest, I wanted to test out the repaired track for the mizzen sail which had been bent out of shape during the sail across Pamlico Sound under small craft warnings and, most importantly, I wanted to experiment with my new camera, a GoPro Hero 3+.  This camera is a replacement for my old Pentax Optio W90 which is now impersonating a submarine on the bottom of the Pasquotank River. 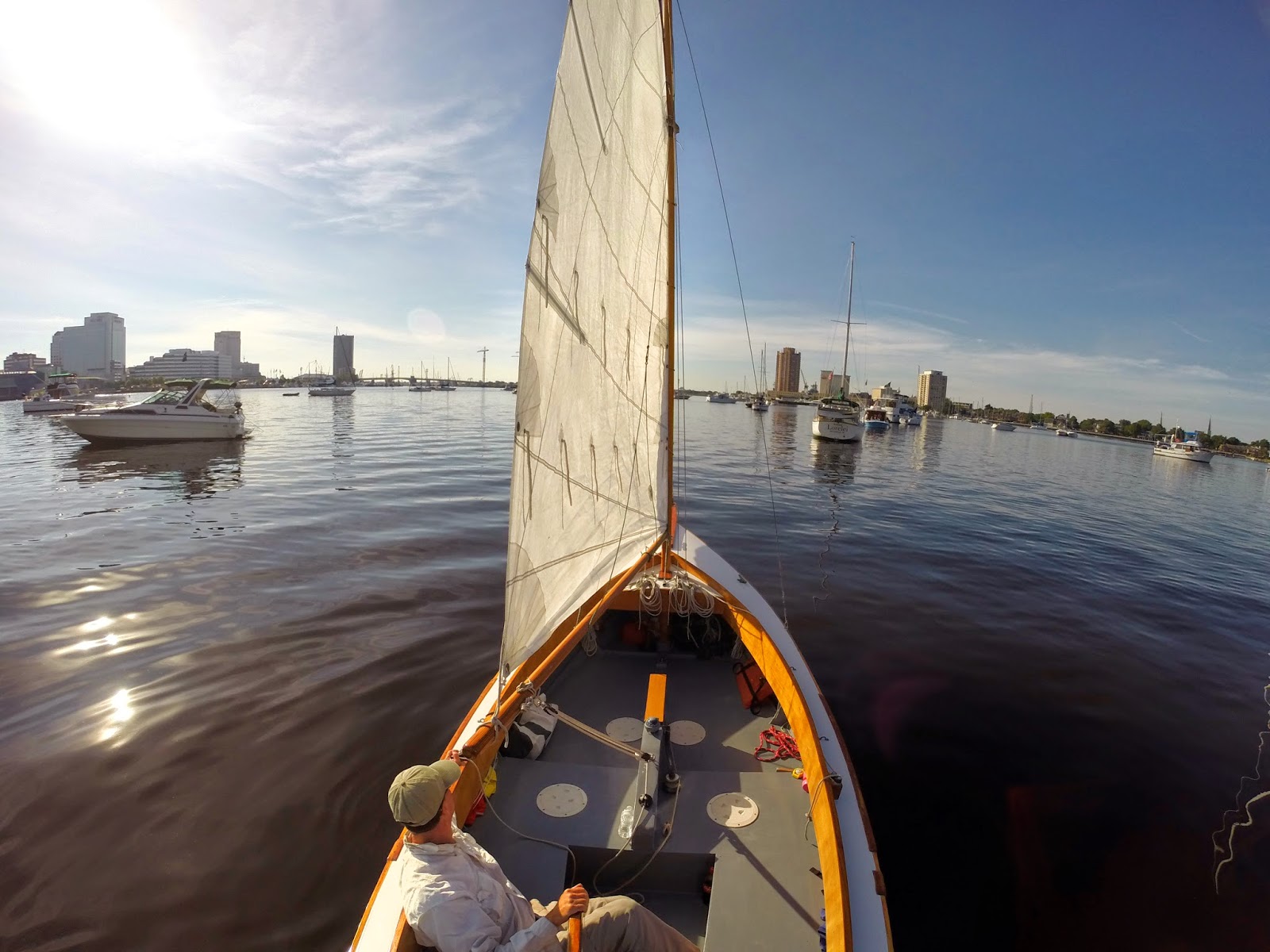 I've had a little experience with GoPro's, we had one at the office for a while.  They are very small, fixed focus, wide angle video and still cameras that come with a waterproof housing.  The version I bought is tiny but has some incredible features. 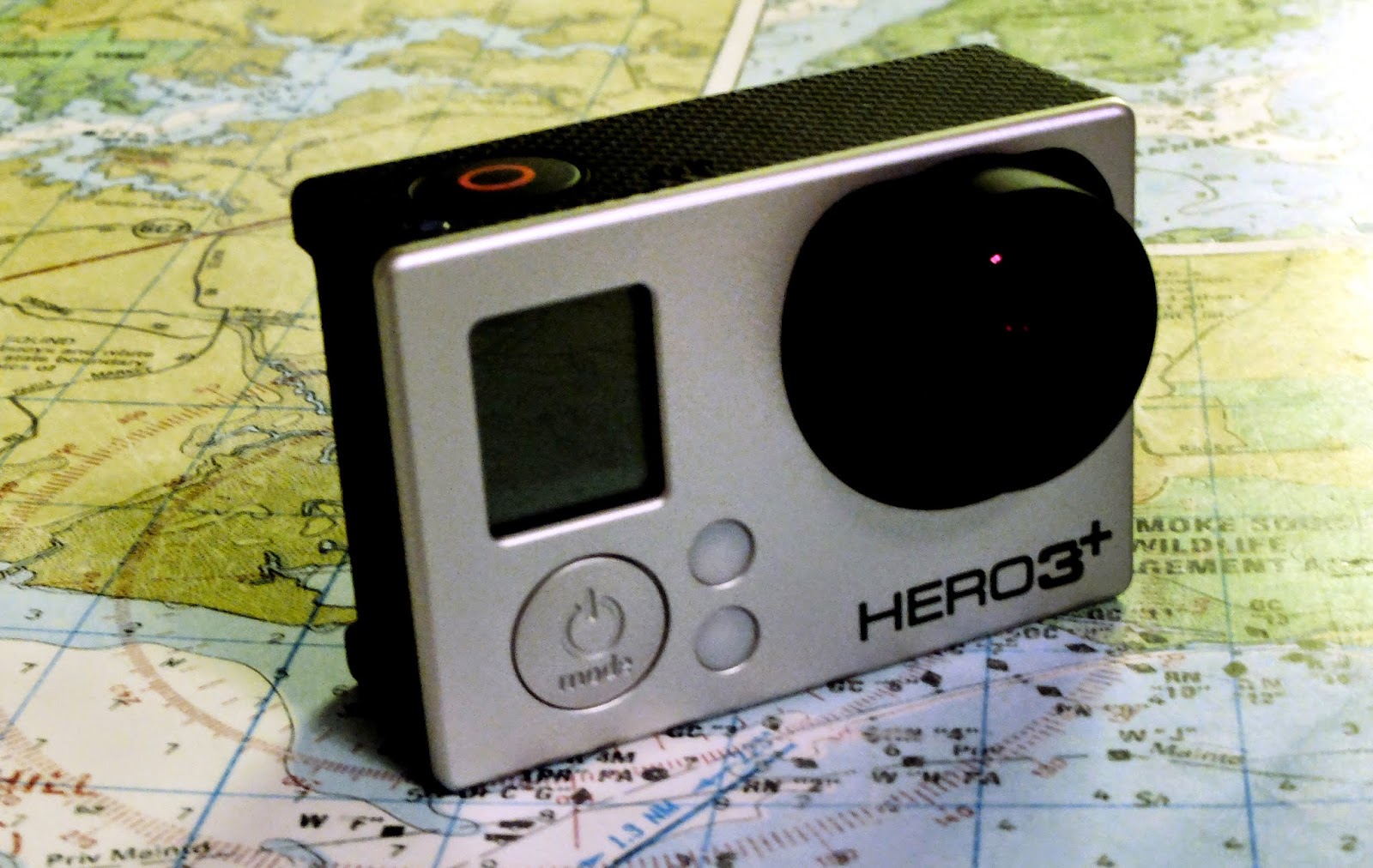 As I said, this is a replacement for my old waterproof point and shoot.  How much will I use it?  Not a lot.  Mostly I shoot with my Fuji X-20 digital rangefinder.  But when the weather is bad or should there be a lot of spray coming into the boat, a waterproof camera makes a lot of sense.  And there is another use I see for the camera.  It has an interval shooting feature that allows the camera to be left in one spot where it can shoot photographs every so many seconds up to one minute.  The camera was mounted on the mizzen mast about four feet off the deck for the photographs you see here. 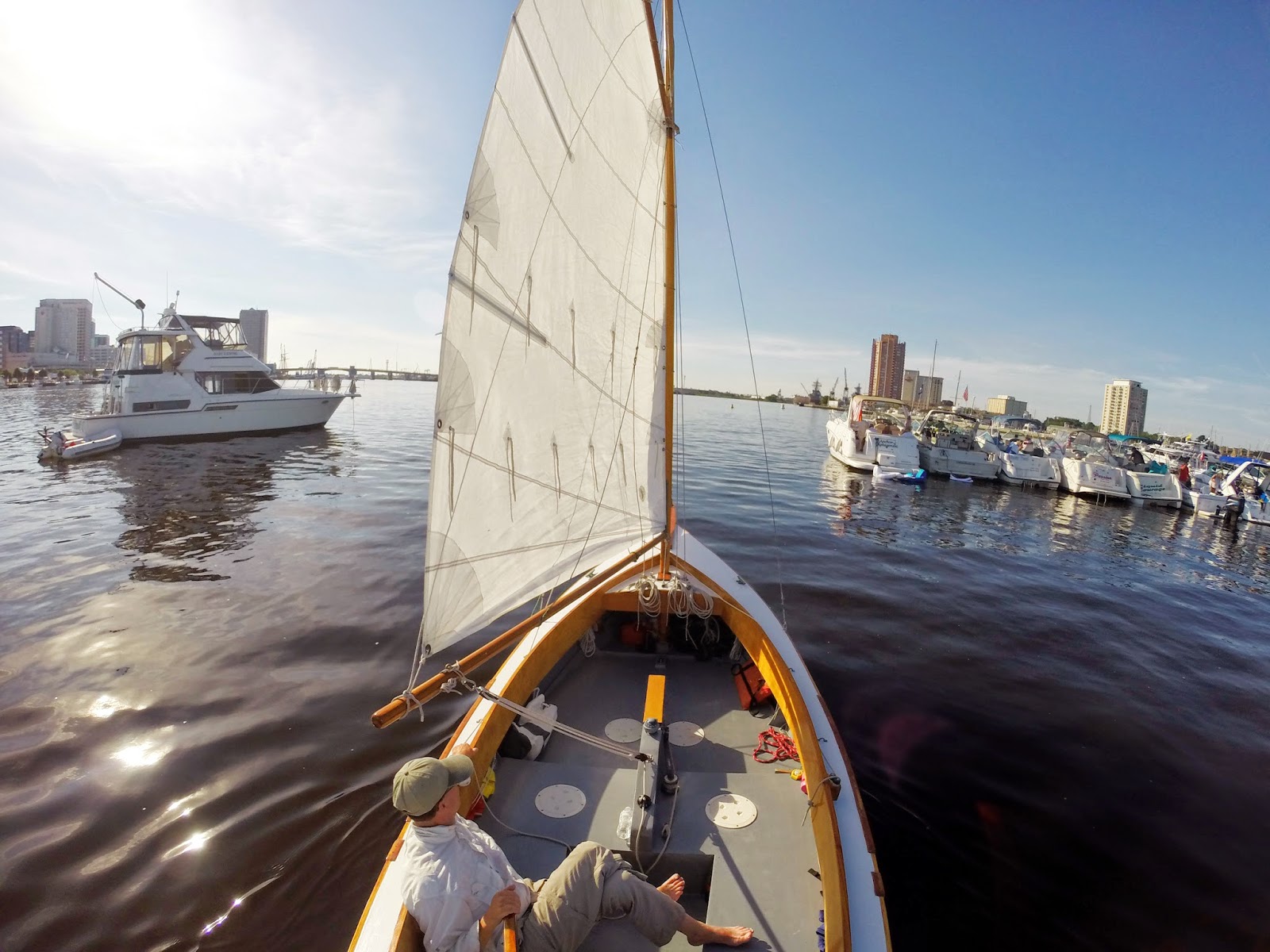 If you look closely at the photograph below you will see that I have my iPhone in my hand.  Phoning home?  No, I'm shooting a photograph with the GoPro.  The model I bought has built in wifi.  It can create a local network that I can connect to with the iPhone or iPad.  Using the GoPro app, I can control the camera.  I can change the settings from video to still, change the shooting rate from single frame to a burst of mode that captures - get this - 30 frames per second at 12 megapixels each, or switch to interval shooting mode.  I can also preview on the phone what the camera is seeing or what it has already shot.  Pretty amazing. 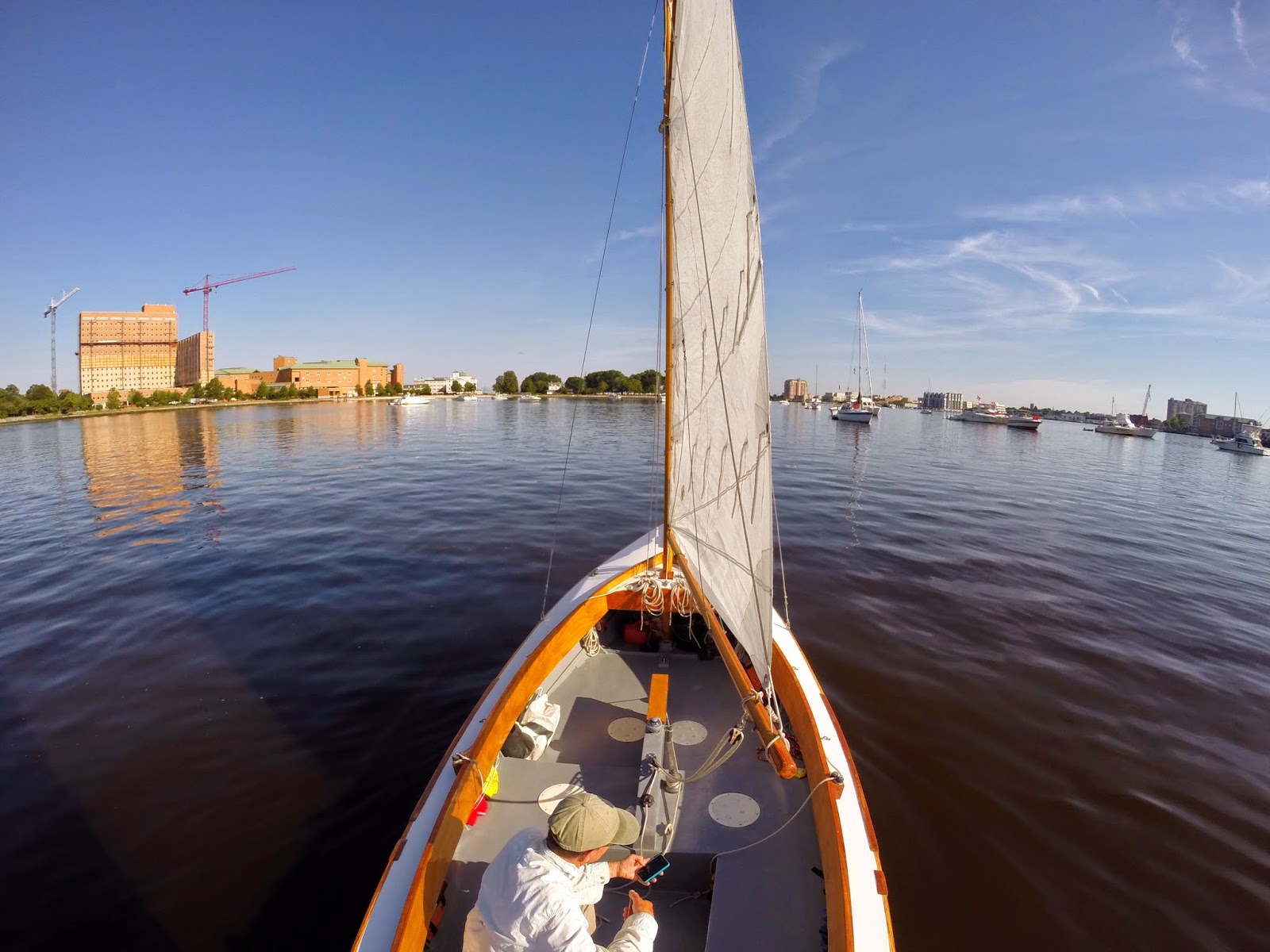 I could see on an interesting day of sailing, for example the sail across Pamlico Sound with 20-25 mph of wind and two to three foot waves, sailing under just mizzen and jib, having the GoPro mounted on the mizzen shooting a frame every minute for the two-hour-plus crossing.  There would be a certain randomness to the images captured, but there would be the chance of getting a photo of Spartina heeled over in the wind with breaking waves and spray coming over the bow.  There's no way, when single handing, of shooting that photo myself.  But with a little luck, the GoPro might get it. 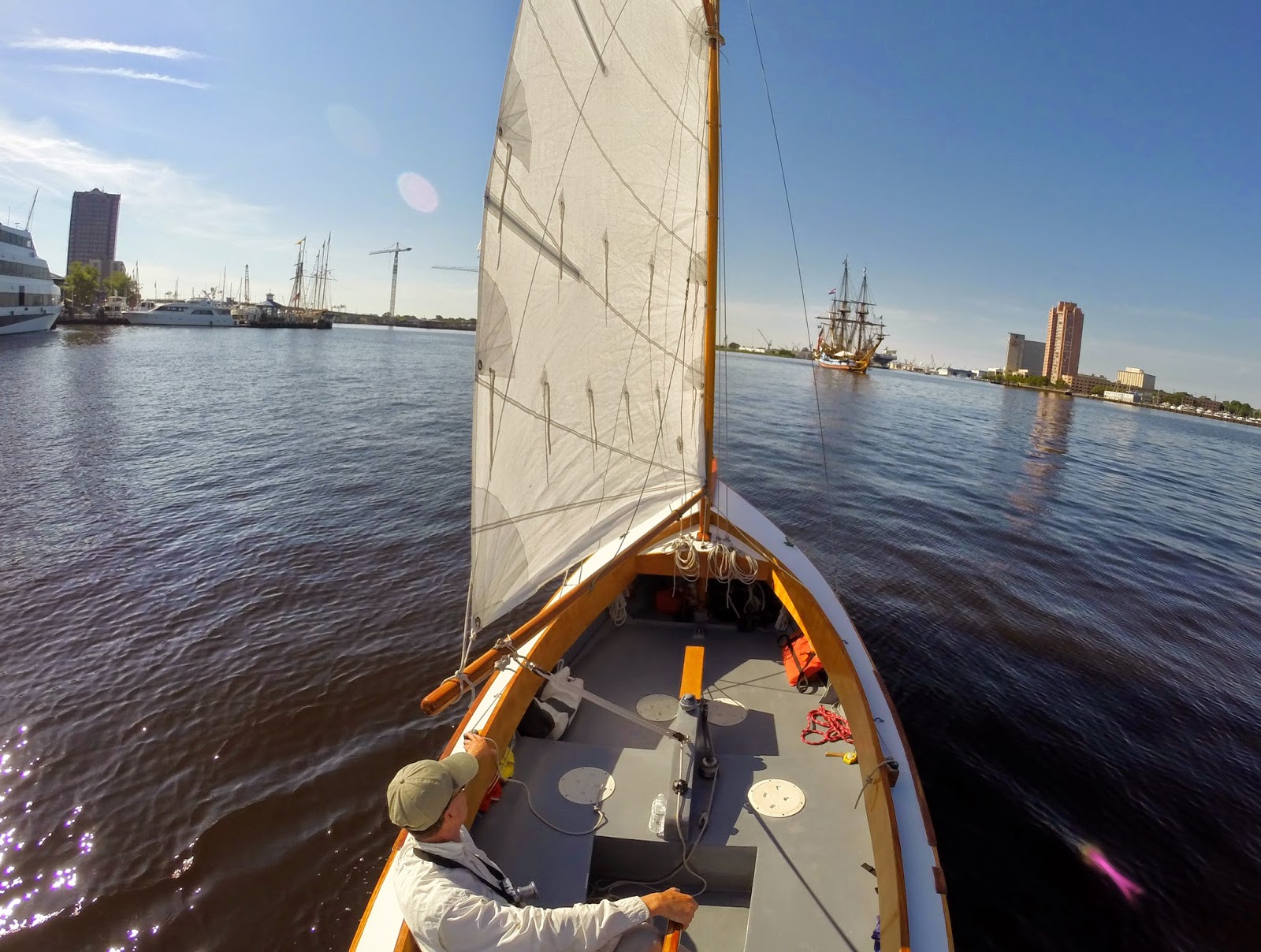 It's an interesting camera.  I will experiment with it some more, then tuck it away until the next cruise.  I can't wait.

Don't know why that posted twice.

Anyhow, here's the next step in your evolution as a solo sailor/photographer:

I can't wait to see that future photo of which you speak!

Love my gopro hero 2
Not just photo burst etc but try doing time lapse stuff with it. On YouTube there is an excellent gopro channel with loads of tips and ideas