a most fortunate miscommunication

Saturday morning I sailed through the the small fleet, maybe three or four boats, anchored out on Craford Bay.  Most cruisers aren't up and about that early but as I approached a white-hulled ketch I saw a couple aboard, that man waving and the woman giving me a thumbs up.  They were flying a Canadian flag so I took them for late season snow birds headed back up the coast after a winter in the Caribbean. 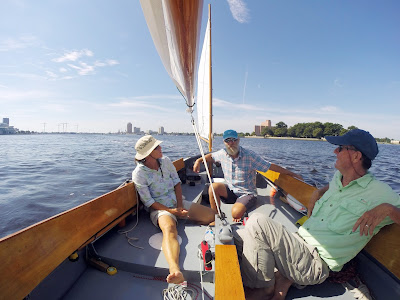 I asked them where they were headed.  Nova Scotia.  From where?  Well, says the gentleman, we sailed from the west coast of Canada.  (Now this was getting interesting.)  When did you leave?  1988.  "Wow" was all I could say.  Well, the woman said, we spent a little time visiting the islands of the Pacific.  We shared a laugh, waved goodbye and I headed across the river in a fine breeze. 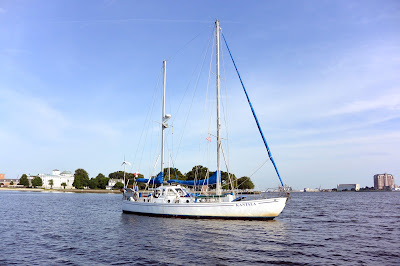 Later in the afternoon I sail over to the ketch to take a closer look.  The man peeks up out of the cabin, said they could hear Spartina's hull cutting through the water.  He complimented the boat and I asked if he would like to hop on for a sail.  Absolutely, he said.  So I sail up along side and wait for him to climb aboard while he's asking if I had a painter.  I was saying come on aboard and he was saying tie up here.  And then we realized we had misunderstood each other: I thought he was coming sailing on Spartina, he thought I was visiting his ketch Kantala.  Come aboard he said and we'll sort things out.

So this was how I met Michael and Sheila and spent the afternoon sitting in the spacious cabin talking about boats big and small, ocean sailing, island lifestyles and who knows what else.  They had stories from Australia and New Zealand, the Indian Ocean, Asia, Africa, St. Helena, South America and the Caribbean.  And now for the first time they were sailing north to Nova Scotia.  They could not have been more gracious and welcoming, it was a true delight.  A couple of times I said I should be going but the conversation would take another turn and I would sit back down and enjoy their company some more. 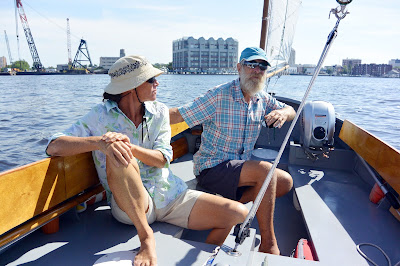 I was the host the next morning as Michael and Sheila joined me for a morning sail on Spartina where we had the chance to continue our conversation.  And then to lunch where me met my friends of many years, Fred and Mary Lou, who were bringing their new cruiser up the ICW from Oriental.  It was a great lunch where we realized we had all been on the ICW from Beaufort north to the Neuse River, Goose Creek Canal, Pungo River and Belhaven within the last month, myself during the spring cruise and Michael/Sheila and Fred/Mary Lou often within a day of each other this past week and at times sharing the same harbors.  Very cool. 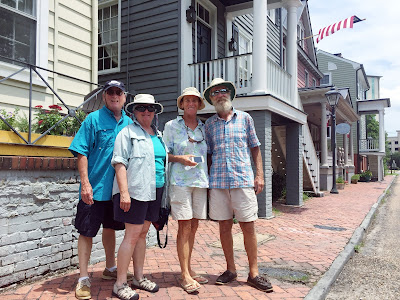 Now I hear that Fred and Mary Lou are in Deltaville on their way to Rock Hall.  Michael and Sheila will be casting off at dawn bound for New York and points north.  And I will be here, very glad for a fine weekend of sailing and the chance to meet new friends and see some old ones.

And I shake my head and wonder how I built a boat to get away from everyone and instead made a lot of good friends.  Go figure.

I had the pleasure of running into Mike and Sheila when I was repairing a Lagoon 55 cat in Suva Fiji. They rolled their sleeves up and joined the laminating team. They make a damn good Bloody Mary too.

I missed out on the Bloody Marys, will ask about that should they pass through the area. Really wonderful people, a joy to get to know them. steve