in search of Washington Tuttle

I don't know any more about Washington I. Tuttle than what is written in the three and one-half pages printed off an internet site years ago. His friends called him Tut. He had a wry sense of humor and an understated way of describing his adventure. He had done some small boat cruising. He didn't seem too concerned about planning. He liked a cold beer now and then.

I thought of Mr. Tuttle when I read the comment to the blog from S R "Seth" Wood. Seth grew up sailing the Eastern Shore and is now builidng a Pathfinder. His dream cruise - a Delmarva circumnavigation. "It can be done!" he said. The Delmarva peninsula is the narrow piece of land, made up of of parts of three states - Delaware, Maryland and Virginia - that separate the Chesapeake Bay from the Atlantic Ocean. Decades ago (the transcript never mentions the year), in a small catboat, Washington I. Tuttle made that circumnavigation. 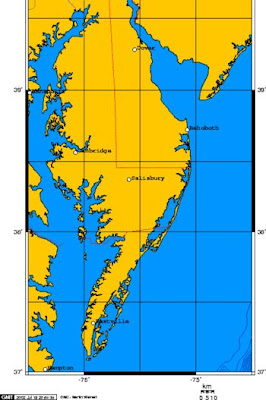 He left his home in Queenstown, Md. while his wife was asleep, he said, so she could not object. It was mid-August, the month with the highest temperatures, the month with the least wind. He sailed north to Worton Creek where he stopped for a beer. Dinner was dry that night - he had forgotten to pack water for the trip. With a fair wind (and water picked up at Worton Creek) he sailed north the next day past Betterton, the Sassafras and Turkey Point, entered the C & D (Chesapeake and Delaware Canal) and motored to Chesapeake City where he left his catboat at a marina.

After a few days break he returned to his boat and motored in to Delaware Bay dodging cargo ships, thunderstorms and thick clouds of flies. He eventually anchored in "a big ditch", also known as the Jones River, for the night. Near Cape Henlopen, where Delaware Bay opens in to the ocean, Tut ducked in to the Lewes and Rehobeth Canal, stopping for the night at a drawbridge. The next day he sailed in to Rehobeth Bay and called his wife - he needed money. Next stop was the Coast Guard station at Indian River. He timed his departure the following day for the slack tide and sailed past the stone jetties into the ocean. He sailed south on the Atlantic, and then he turned west in to Ocean City, Maryland, tied up at a commercial marina, had a sandwich and a beer.

Tut worked his way south inside of Assateague Island with the barrier island to the east and the wooded coast of the eastern shore to the west (I've visited beautiful Assateague Island, walked a couple of hundred yards back behind the dune line and found pieces of shipwrecked boats scattered about the sand, boats so old they were held together not by nails but by wooden pins). He left his boat for a week at Chincoteague (pronounced "Shincoteauge" by the locals) to return home for work, hitchhiking to Tees Corner (a convenience store still there to this day) to catch a bus back home. 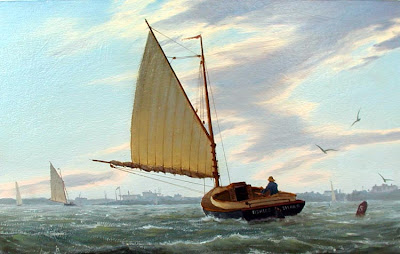 Resuming his trip Tut took his boat out on the ocean again. He sailed south all day, chased well offshore by the vicious blue headed marsh flies. He anchored for the night at a small harbor near a Coast Guard Station on, according to the transcript, Anismas (I cannot find Anismas anywhere on the charts - could the writer have misunderstood Tut saying "an isthmus"? There were a handful of CG stations on the barrier islands, decommissioned and eroded away by the late 1960's). Out on the ocean again he continued south then entered the barrier islands to anchor in the small harbor at Oyster and have a beer with a fishing boat crew.

He continued south to Fisherman's Island at the very southern tip of the Delmarva Peninsula and turned west in to the steep waves of Chesapeake Bay. He pushed through the waves under power and then turned north for a rest behind the sunken concrete liberty ships of Kiptopeke. Further north he entered the waterman's harbor just north of Cape Charles (he mistakenly calls this Chesapeake City) where he anchored near "a rickety pier and a small store on it." (In the late 1980's I visited the harbor. It was filled with deadrise boats from Crisfield and the Tangier Sound area. They were down south that fall dredging (or as they said in their island brogue "drudging") for crabs. The store was still there, old grizzled fishermen buying candy bars, crackers and hot chocolate. The harbor has since been turned in to an upscale marina with trendy shops and a restaurant few watermen could afford). 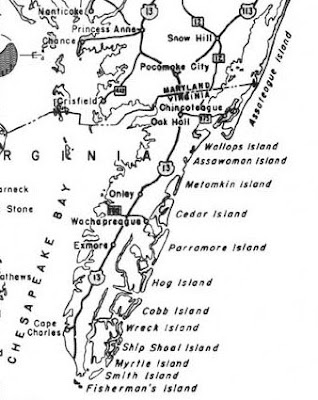 Tut continued on his journey north, passing through the channel at Tangier Island and continuing north through Hoopersville. At 9:30 at night he stopped at Poplar Island. It was foggy the next day and he worked his way north, eventually putting in a double reef before reaching Kent Island at 11:30. A short while later her arrived back to his homeport of Queenstown. As far as I can tell the trip involved about 15 days of sailing and somewhere over 400 miles made good. 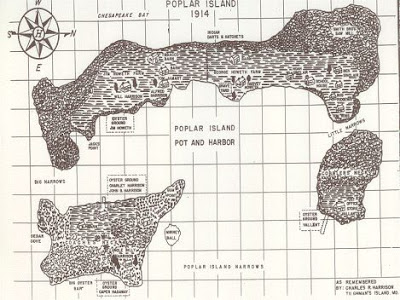 It sounds like quite a trip. I've always liked catboats, for a long time that was my dream boat. I've heard catboats, along with jazz, described as a true American invention.

Mr. Tuttle did not have a gps or high tech clothing. His anchor light was a kerosene lantern hung in the rigging. Did they even have sun block back then? I can almost picture him with worn blue jeans and a khaki shirt, maybe a faded downeaster cap with a long bill. And clear eyes that drifted towards the horizon.

This is GREAT! When you mentioned that someone had done this trip years ago it sounded like something abstract you had heard of; I had no idea you had a few pages of information.

The trip was also done in the 70s by a photographer called Robert de Gast (occasionally does freelance work for WoodenBoat now) and chronicled in his book "Western Wind, Eastern Shore," which I'm looking at as I type this.

De Gast sailed in May and took a month, returning home to Annapolis on Memorial Day weekend. His first several days were chilly and even frosty at one point. I can't imagine trying to do it in August. In a catboat. In a matter of weeks. Yet I heartily applaud both the achievement and the emphasis on cold beer!

It's hard to imagine a craft better-suited for such a trip than the Pathfinder. Enough open-water capability that you could handle even a small craft advisory on the Bay if you got caught out, but lithe enough to raise the board and go poling up some little trickling creeks for the night.

Many thanks for this glimpse of Washington Tuttle.

Your information helps date Tut's trip as he refers to de Gast's book. So maybe late 70's or early 80's for the catboat circumavigation. It was a great trip regardless of time frame.