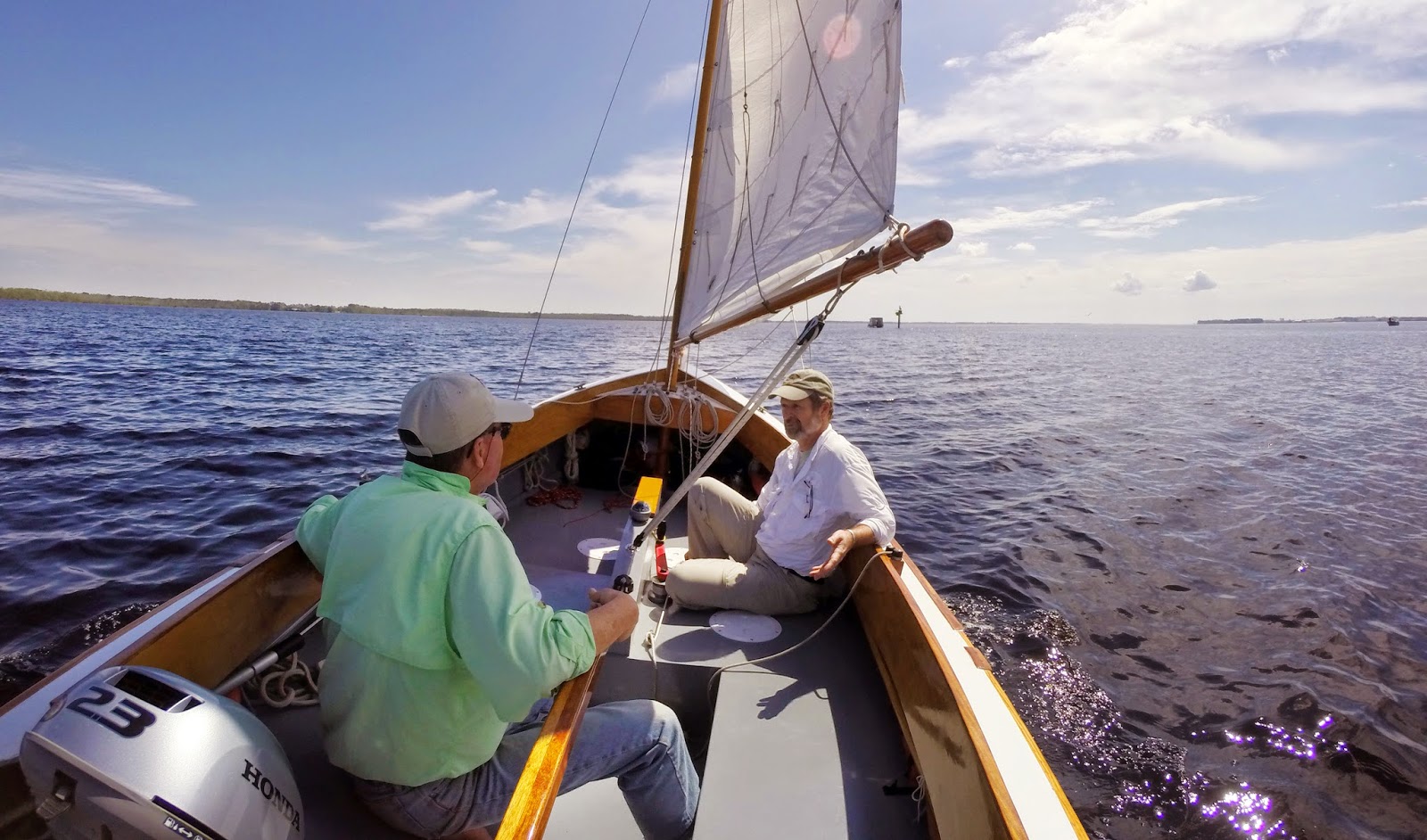 Barry was have none of it.  I had suggested the evening before the sail that he look at the Elizabeth City forecast, with decreasing wind and increasing cloud cover, and decide if it was worth the four hour drive from his home in the mountains for a sail.  His replay email began "Nope."  He was coming anyway, and I'm glad he did. 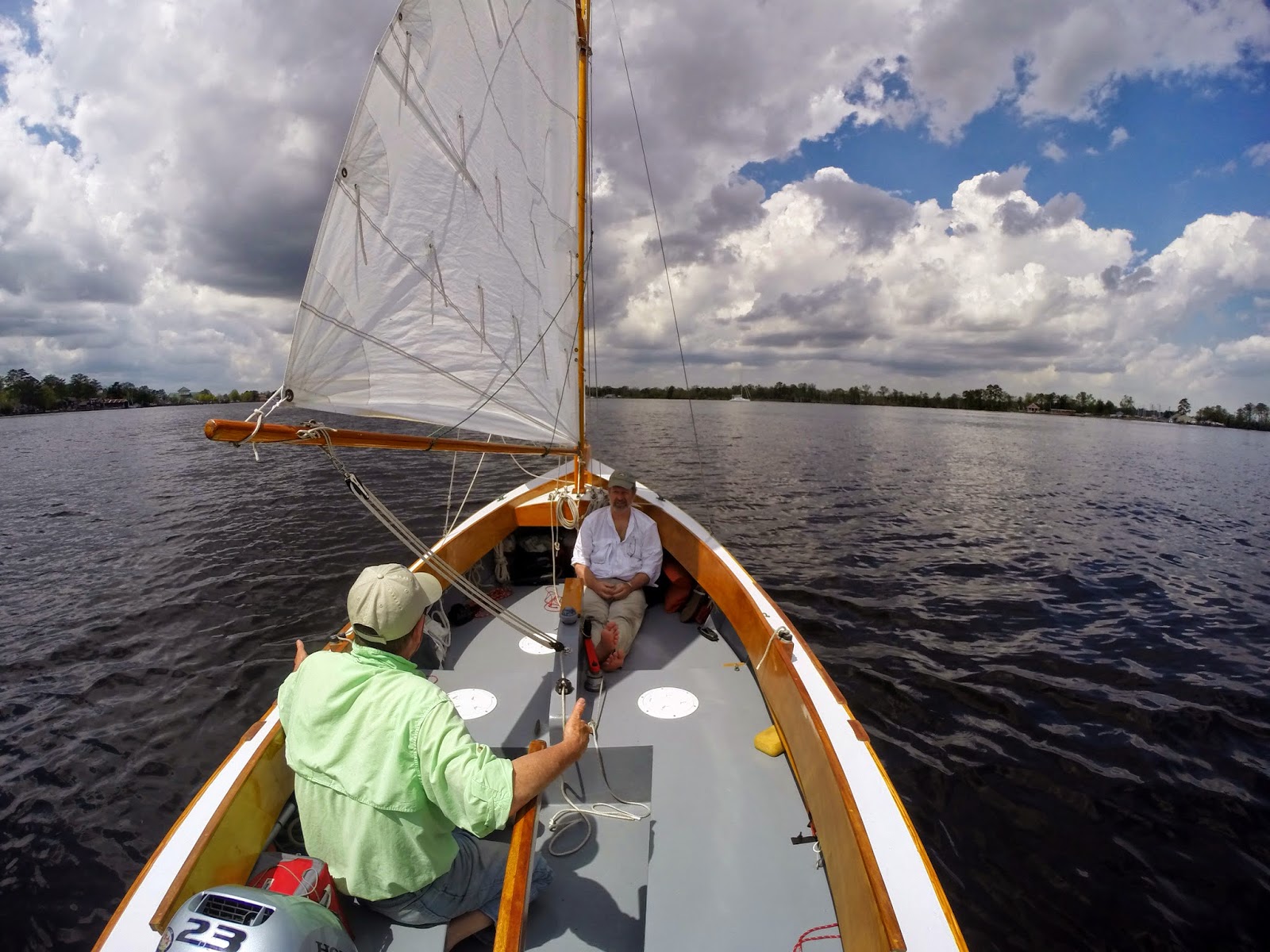 I had planned on sailing regardless of weather, wanting to get some more time on the water with the spring sail just a couple of weeks away.  Sails up before 9 a.m., I came back into the dock on the Pasquotank River an hour later just as Barry arrived.  Soon we cast off. 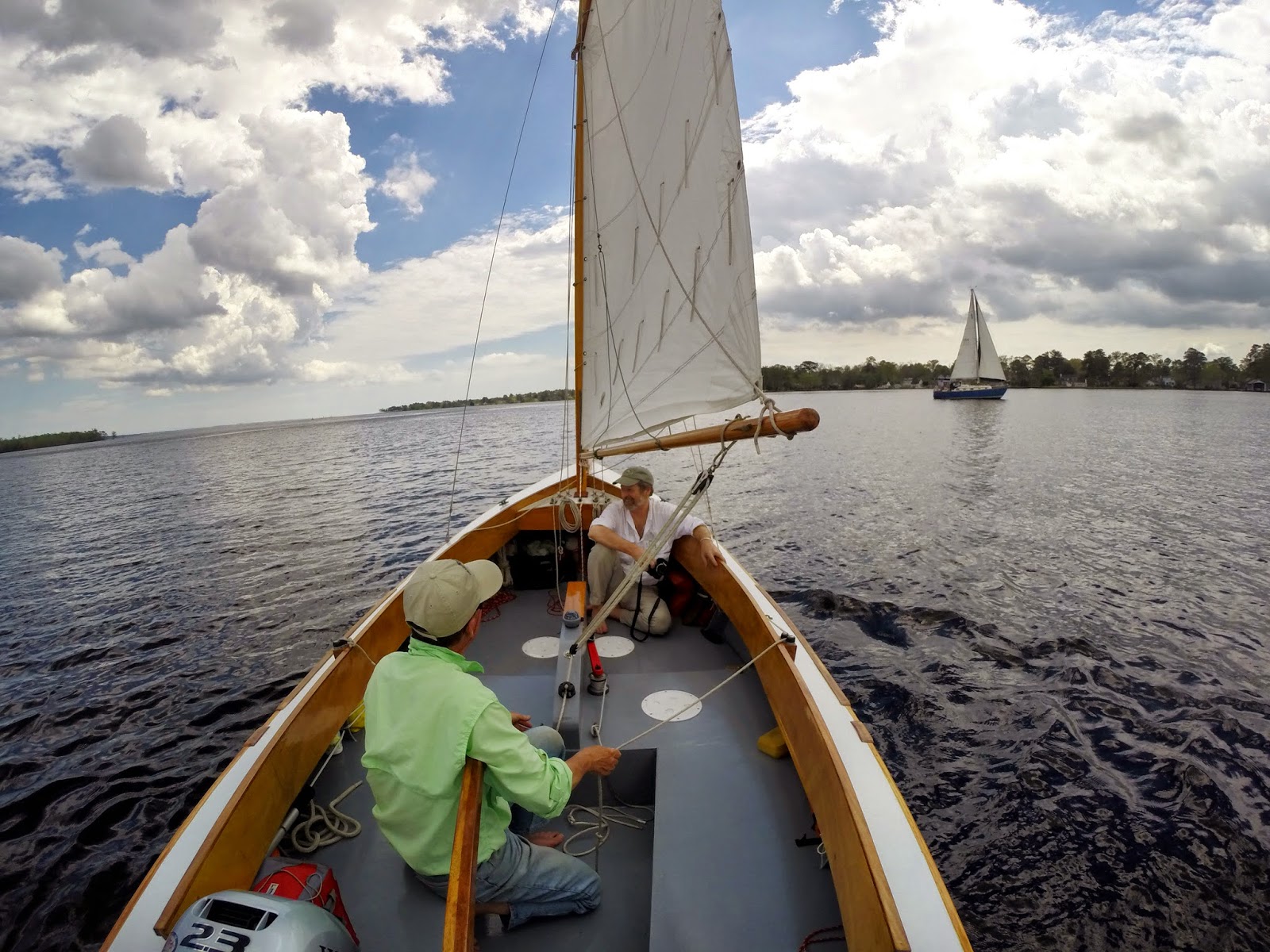 Barry is among that group of friends that I have met through boats and this blog that I typically get to see just once or twice a year.  We've got a lot of shared interests and during those once or twice a year meetings it is difficult to finish any one conversation before starting the next.

The wind did cooperate for a nice discussion, a light breeze which made for easy sailing (much different from our sail in late 2013 on a day so gusty there was little time to talk).  We had plenty of time to visit about..... boats - my Pathfinder and his two beautiful melon seeds, and those belonging to friends; cruises - he has a Tangier Sound sail coming up with on the Chesapeake Float and I've got the Pamlico Sound trip; family - he has two daughters finding their place in the world, just as I do; books; digital publishing - we've both been involved in the publishing industry for years; friends we have in common scattered over the Mid-Atlantic; places - St. Michaels, Tangier and Smith Islands, Chestertown, Ocracoke, Swan Creek, Belhaven, Cambridge and Deal Island just to name a few; food - I had snagged Barry some scallops and oysters from Uncle Chuck, he brought down a bottle craft cider made from Blue Ridge grown apples and a can of his favorite cajun spice; sails - Stuart of Dabbler Sails is the sailmaker of choice for both of us; and, uh, well, the list goes on...and on. 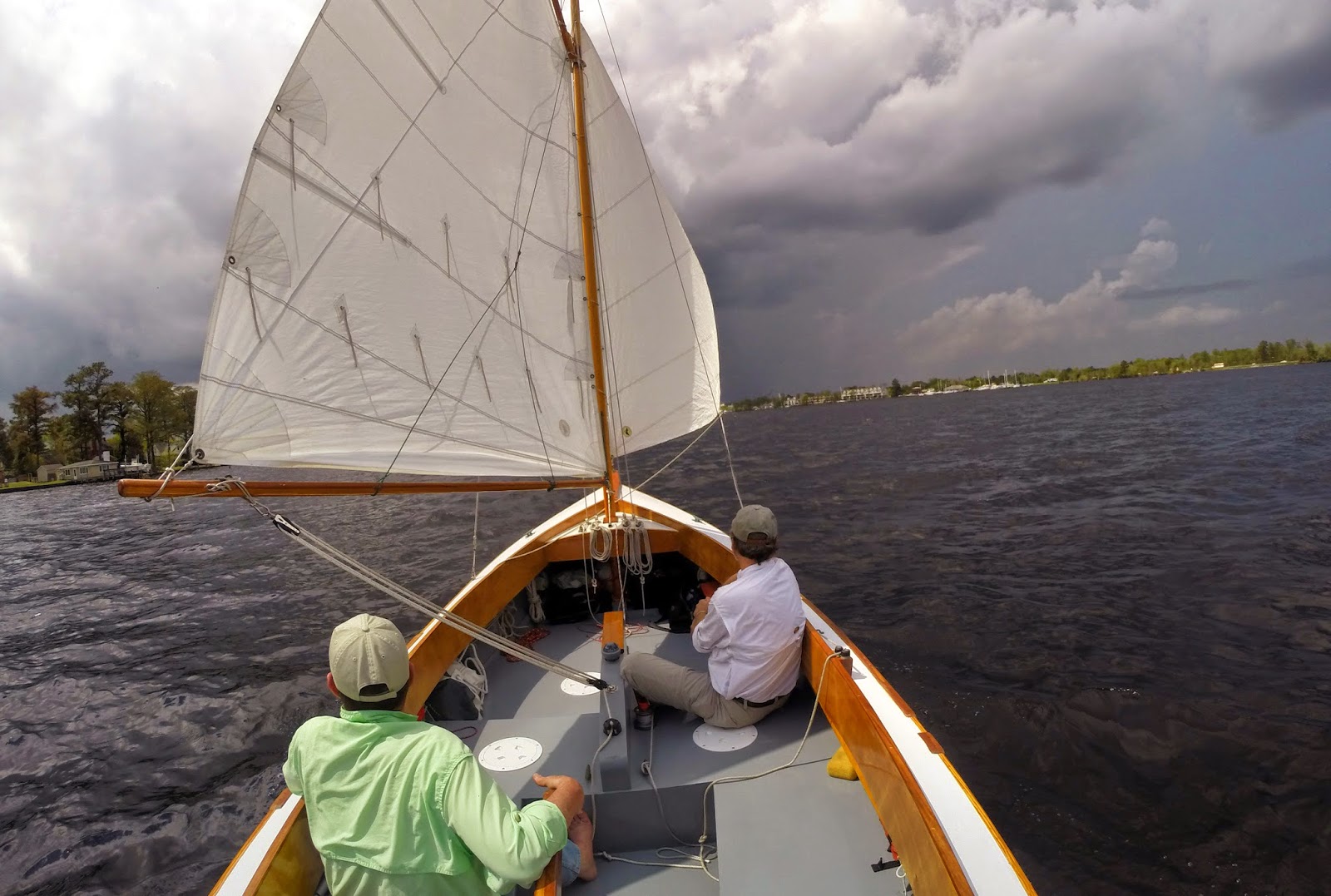 Mid-afternoon the weather became a point of discussion as thunder rumbled and dark clouds with rain showers moved in over Elizabeth City.  We tied up for briefly at the old Elizabeth City Shipyard, now in a sad state of decay, to look at the boats - some battered by storms and others covered by barnacles, and to get off the water as the storm moved through.

Back out on the river with clearing skies Barry took the tiller for a few runs up and down the Pasquotank.  It turned out to be a great day and a nice chance to talk with a long distance friend.  Thanks for making the drive, Barry.  I'll look forward to seeing you again.  Maybe St. Michaels at the small craft festival?? 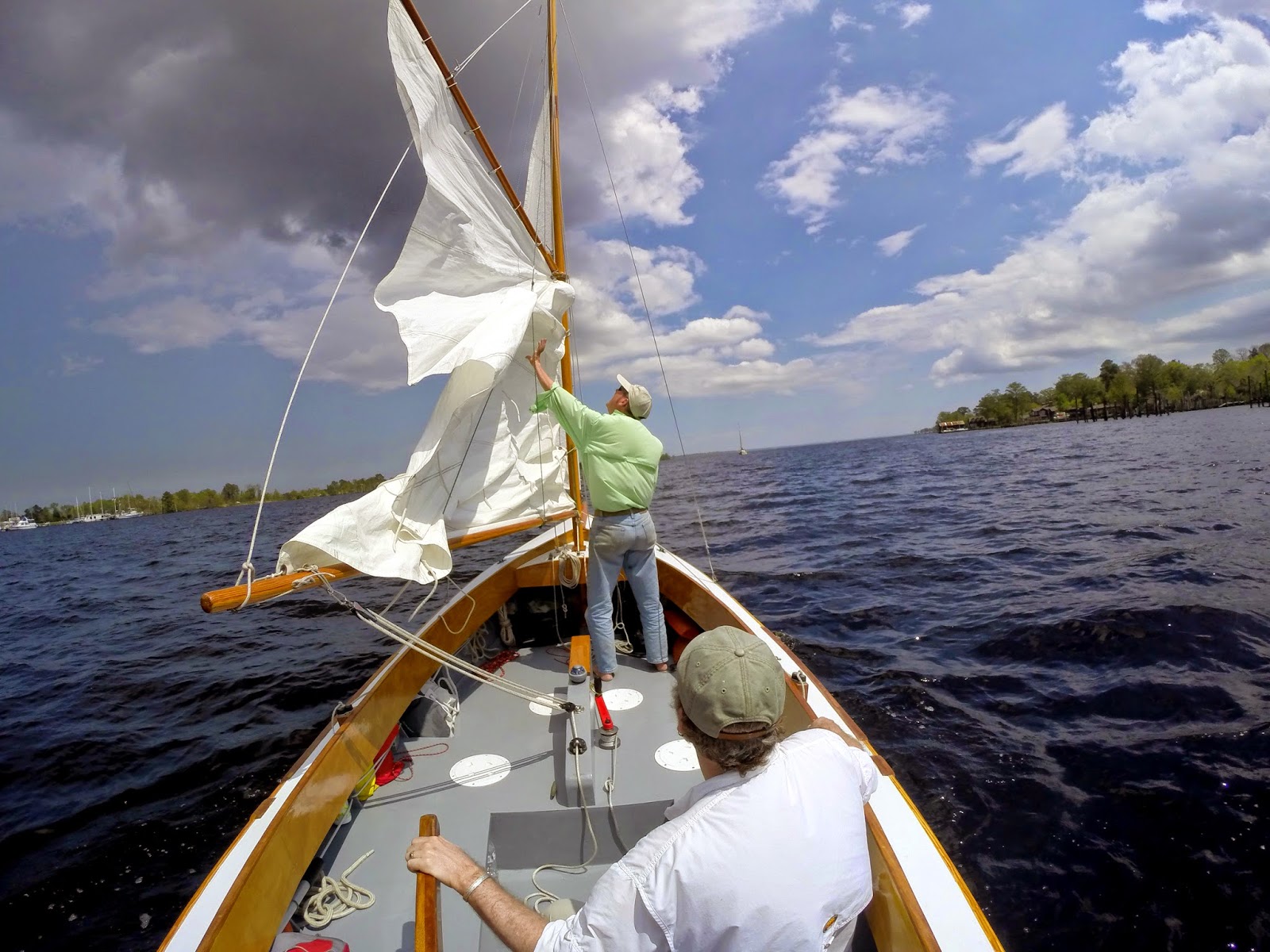 Google Maps tells me I can be in Elizabeth City from my home in 2 hrs, 30 min.

We can do that, maybe late may or early June. steve